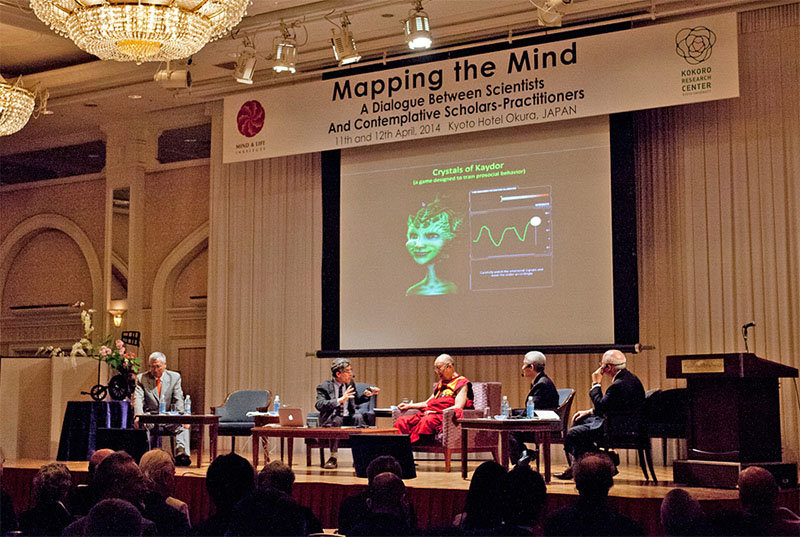 Kyoto, Japan, 12 April 2014 - The second day of the Mapping the Mind meeting began withShinobu Kitayama speaking about Cultural Neuroscience. He said that although humanity is one it has multiple manifestations. This variability in cultural models combined with neuroplasticity means the brain may be moulded by cultural context. The brain is not a static entity, but can change as a function of experience. It may be shaped by ecological, environmental and cultural factors. As a biological organ the brain is also subject to genetic influences and there is evidence that these too may vary according to society and culture.

Kitayama suggested that the view of the self in the West is that it is independent. You choose your own friends and so forth. In other parts of the world, such as Asia, the self is more relational and interdependent. He cited experimental findings that apparently show a difference in error related negativity response among those from the West with regard to self interest and the interests of others, which was not found among Asians.
His Holiness resisted this conclusion saying it was difficult to generalise because there are of course altruistic Americans and self-centred Asians. He suggested that findings involving Africans, and distinctions between people living in cities and in the country would be interesting. He also remarked that it would be interesting to see if male and female distinctions made any difference.
Joan Halifax, a Zen Roshi gave her presentation about compassion training. She said that compassion is generally considered to be the capacity to attend to the experiences of others and proposed that compassion cannot be taught; it is an emergent process.
Shinsuke Shimojo, an Experimental Psychology Professor, returned repeatedly to an illustration of the mind as an iceberg. His point was to show that the explicit conscious mind is only the tip of the iceberg. The significantly more extensive implicit mind is below the surface. Describing how a flea can be induced to give up jumping by confinement under a glass dish, Shimojo spoke of evidence of learned helplessness that characterizes a strain of depression afflicting Japanese. It's a depression that has been calculated to cost the economy $25 billion.

His Holiness described friends who have developed a degree of concentration such that they can remain focused on the object for 3-4 hours. Is this possible? Taking up the issue of different environmental factors he suggested that such a meditator ought to be able to continue his practice even in a big city. Through training you should be able to remain tranquil 24 hours a day.

"While I don't have deep experience, I think I can see some improvement over the last 25 years. I'd be interested to know the effect of the completely dark days in winter in some parts of Northern Europe and the midnight sun in the summer. I sometimes call myself the sleeping Dalai Lama because of my fondness for having a good night's sleep. We are social animals," he said, "and we can no longer remain in isolation. We are part of a greater whole. This is true of both Japanese and Tibetans. When people come to tell me about their difficult problems I sometimes tell them about mine in order to give them a broader perspective and the sense that they are not alone."

Dr Barry Kerzin offered a mala or rosary as an analogy of the mind or consciousness, citing the string as indicating its continuity and the beads as like the moments of mind that follow one after the other. Its circularity is also indicative of the mind's having neither beginning, nor end.

Junko Tanaka-Matsumi gave a presentation about Mapping the Minds of Children, beginning by saying that children's minds change from moment to moment. She pointed out that when you see that Japan comes second in the world for provision of science education it would appear that all is well with the Japanese education system. However, in the classroom there are children who cannot follow what the teacher is saying. They display disruptive behaviour such as not remaining in their seats and because of the sense of homogeneity no special help or provision is made for them. Reinforcement of positive behaviour in children increases their self-esteem and encourages positive peer interaction.

Makoto Nagao stated that the function of the mind is best mapped or revealed in conversation and applied this to the special area of developing care-giving robots. Such robots should be able to converse with those for whom they are caring. Dr Nagao suggested that developing robot dialogue systems will not only help those for whom the robots care, but could lead to clarification of how the mind reacts to external stimuli, so furthering understanding of mental function. This will be an unusual route to mapping the mind.

In response to a question about who he has in mind as benefiting from meetings like this he said: "I always think of the 7 billion human beings alive today as physically, emotionally and mentally the same. Externally things may have been different, but even several thousand years ago our emotions would have been the same. The Buddha was once like us, but through persistence and hard work he transformed his mind. In this 30 year partnership with scientists we have learned many useful things and, unless they are merely being polite, scientists are learning a good deal about the mind too. Between us we are working on a curriculum to introduce secular ethics into the education system. Scientists are participating in this project not out of a wish for material reward, but because of the long term benefit it will provide. Our aim is a happier humanity and it won't be achieved just through prayer or wishful thinking but by learning to deal with our destructive emotions."