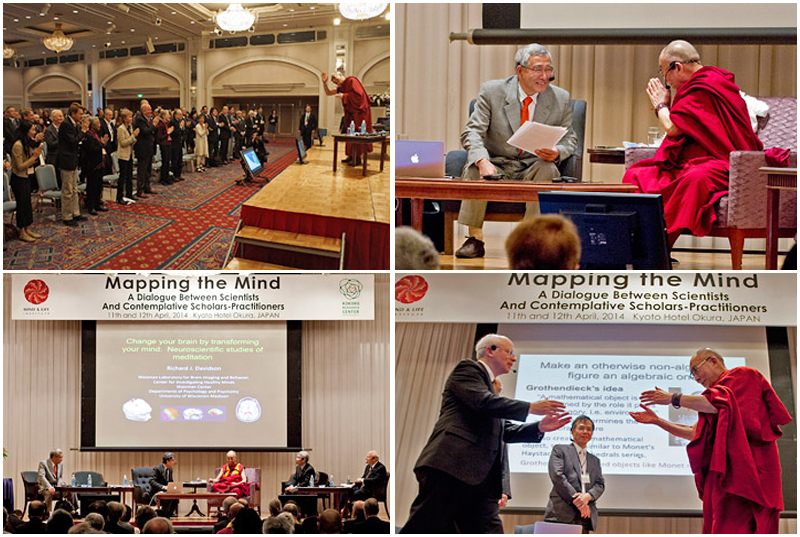 Kyoto, Japan, 11 April 2014: - Describing it as eyes able to see into the world', His Holiness the Dalai Lama said 'Mapping The Mind' is about taking on whole system of mind and emotions, that will help with the problems we face today.

A two day dialogue between scientists and contemplative scholars and practitioners focussed on the theme 'Mapping the Mind' in Japan's erstwhile capital, Kyoto, began promptly Friday, 11 April, 2014. Arthur Zajonc, President of the Mind & Life Institute and Sakiko Yoshikawa, Director of the Kokoro Research Center, Kyoto University were brisk in their introductory remarks. They invited His Holiness the Dalai Lama to open the proceedings, which he did.

Mind & Life meetings have been happening for more than 25 years, but I have been keen that they should also be held in an Asian country where Buddhist ideas are historically part of the culture. In our discussions with scientists about mind, much of the understanding of the mind comes from ancient India.

My own understanding is based on the Buddhist science of mind. This is not to say we have ever talked about past and future lives, liberation or emptiness, those are topics that are properly the business of Buddhists. We have confined ourselves to discussions of the mind, brain and so forth, which is why I think we can refer to conversations between Buddhist science and modern science."

He explained that all religious traditions talk about love, compassion, contentment and tolerance and their different philosophical views are intended to support practice of these values. He suggested that people of a Buddhist country may be more receptive to ideas that derive from ancient Indian psychology which are related to the practice of concentration (shamatha) and insight (vipasyana). To make progress in those practices, you have to know something about the mind and the way it works. He said that from the Buddhist point of view, there is no role for a creator, nor any sense of an independent, permanent self. Everything arises due to dependent origination, in other words, everything exists in dependence on other factors.

Mapping the mind is about taking a wider perspective and coming to know about the whole system of mind and emotions. This will help us come to terms with the problems we face. The Tibetan word for translators means roughly, 'eyes able to see into the world'. These days the role is filled by unbiased, open and objective scientists.

Yoshio Imaeda, a Japanese scholar of Buddhism began the presentations. He recalled his surprise at finding that his father had no idea what he was reciting in front of his Buddhist altar. The monk who came to the house once a month could not explain either, nor could his teachers at school. Apparently Buddhism was to be followed but not understood. He decided to do his own research. He discovered that not only do Tibetans have the most exhaustive collection of Mahayana texts, but that Tibetan Buddhism remains a living tradition, despite the tragedy that has taken place in Tibet.

He described Japanese monks as professionals, particularly with regard to funeral arrangements, and Japanese Buddhists as emotional and sentimental, but not rational. He recounted going to a Buddhist temple at New Year and his son making a wish to excel in his studies, his daughter making a wish for the family's good health, while their Tibetan friends made a wish that all sentient beings attain Buddhahood.

His Holiness laughed, saying: "This seems like a session of self-criticism. You should know that of 6 million Tibetans 99% don't have much idea of what Buddhism is really about either. To be Buddhists in the 21st century we have to study. Not only monks, but nuns too. Over the last 40 years, nuns have been able to study and are now able to take the highest degrees. This approach of rigorous study goes back to Shantarakshita, the great scholar and logician from Nalanda who established Buddhism in Tibet."

In his presentation, Thupten Jinpa quoted the Dhammapada as saying, 'Mind creates our own world' and the Udanavarga saying, 'A disciplined mind is a happy mind.' Mind has an important role to play. He talked about not only the potential of the meaningful knowledge of the Abhidharma, but also of Buddhist epistemology in the works of Dignaga, Dharmakirti and Shantarakshita that cast light on the nature and scope of knowledge. His Holiness remarked that whereas only one short text by Dignaga was available in China, and therefore Japan, Tibet possessed a rich body of epistemological literature. He recalled that once he began to study Dharmakirti in his teens, his mind became more questioning and sceptical.

Arthur Zajonc asked which comes first, practice or study. His Holiness referred to the three modes of understanding. First listening, reading and study lead to belief and conception. Critical reflection leads to conviction and deep familiarity with that leads to real understanding.

Under the theme 'Change your brain by changing your mind' Richard Davidson spoke about the findings of neuroplasticity, in which changing the mind can be shown to affect the brain; epigenetics, in which changing the mind can be shown to turn certain genes on or off; bidirectional communication between mind/brain and body and innate basic goodness, the finding that infants prefer kindness over aggression. When he referred to examining meditators in a MRI scanner, His Holiness made an appeal that experienced Japanese monks and Zen meditators also participate in this research. When Davidson referred to work that is being done with children with attention deficit hyperactive disorder (ADHD) His Holiness wanted to know if it seemed to be a result of environmental or genetic influences and whether there was any association with anxiety and feelings of insecurity; there was.

Dr Davidson reported that even short term compassion training, in which subjects spend 30 minutes a day over two weeks training in compassion can be shown to have positive effects on the brain. Finally, acknowledging the time that young people spend playing computer games, he reported a pilot project to develop such games that foster kindness and empathy rather than aggression.

His Holiness continued discussions with panellists over lunch. In the afternoon, Jay Garfield who has done extensive study and translation of Buddhist philosophical texts spoke about the need for introspection in coming to understand the mind, but cautioned about the drawbacks of cognitive illusions. He vividly demonstrated the power of optical illusions and the difficulty that even when we know what we are seeing is an illusion that appearance remains. He made the point that we are unable to measure or calibrate our introspective experience. Using the mind to examine the mind it becomes as much an instrument as a telescope or microscope, yet in this case object and instrument are mysterious. He also suggested that without a theory of mind, we cannot treat the data we derive at face value.

His Holiness responded that it is useful to just let the mind settle in thoughtlessness for some time to begin to be aware of its nature and that it is possible to develop an ability to examine the mind, for example when we want to observe anger.

In his presentation about the role of mind in quantum physics, Arthur Zajonc surprised His Holiness with his description of a particle with no size. Shigefumi Mori's comparison of mathematics with art seemed enigmatic as he sought to relate the beauty of a statement of algebraic geometry to Monet's depiction of light. He asked what is going on when, unable to find a solution to a problem, suddenly unbidden one appears to the mind. His Holiness suggested it is connected to the work already done and mentioned that a problem that can't be solved during the day may be solved in dream time. He said that perhaps it is because in dream time sensory consciousnesses are inactive.

Arthur Zajonc took the opportunity to extol the power of thought, its clarity and accuracy. He pointed out that Einstein's theory of relativity did not come about as a result of work or experiments in the laboratory. He reached his conclusions due to the power of thought.