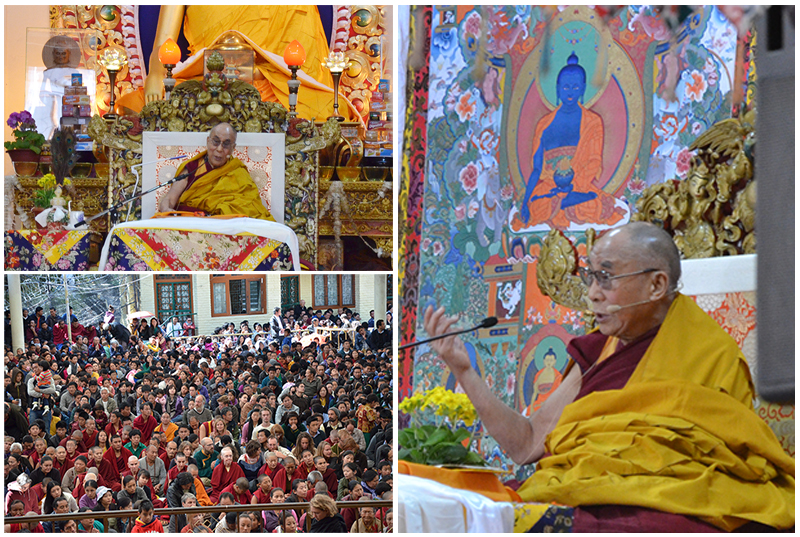 Dharamshala: - The spiritual leader of Tibet, His Holiness the Dalai Lama said, "The more love and compassion there is in your life, the happier you are." As social animals, having "sense of community love and compassion are the source of genuine happiness."

“We Tibetans have a very profound medical system. During the 8th century, the Emperor, Trisong Detsen, convened an international conference about medicine over which he presided, as a result of which Tibetan medicine became a synthesis of several traditions. Now, in the 21st century, we need to take advantage of opportunities to improve it further.”  He said that whether the teaching taking place is long or short, and whether you are giving it or listening to it, it is important to have a pure motivation.

He spoke about taking refuge in the Buddha, Dharma and Sangha, saying that the Dharma is the real refuge. He added that in the Sanskrit tradition the main practice is generating the awakening mind of bodhichitta and an understanding of emptiness and the goal is complete enlightenment. Noting that Tibetan doctors were the principal disciples today, he also made mention of the large number of school students who were attending.

“Although we want happiness, we run after the causes of suffering,” His Holiness remarked, recalling that once he had been enthroned as Dalai Lama he had the opportunity to study the Dharma. However, confined to the Potala and Norbulingka he had little contact with ordinary people and their lives. That only occurred once he started to travel, first to Dromo in Southern Tibet, later to China, where he met many Communist leaders and after that to India where he met freedom fighters who had been followers of Mahatma Gandhi.  Through further travels he observed that everyone looks to material development expecting happiness to follow.  Gradually, though, people have begun to realise that material development by itself is not enough. Nowadays, even scientists observe that peace of mind is what’s important, that peace of mind leads to physical well-being.

“Human beings are all born from their mothers with whom nearly all develop strong bonds of affection. Affection becomes a part of us. The more love and compassion there is in your life, the happier you are. As social animals, like bees, we have a sense of community and within that context love and compassion are the source of genuine happiness.

“I’m a human being first and a Tibetan and Buddhist only second. As a human being what concerns me is how to bring happiness to the rest of humanity. What I have learned is that if you have a warm heart, you’re happier. This is why I make the effort to promote secular ethics. I am convinced that if the Buddha were to appear today what he’d teach would be secular ethics; this is what would be of most help to the 7 billion human beings alive today. What’s clear is that self-centredness is a source of trouble, while concern for others is a basis for happiness.”  His Holiness clarified that while suspicion leads to mistrust and an inability to get on with others, honesty, sincerity, love and compassion attract friends.

Alluding to the extensive and rigorous study and training that characterize Tibetan Buddhism, His Holiness mentioned the crucial role the Tibetan language has played as the best language for accurately expressing the Nalanda tradition. He expressed gratitude to the early Tibetan Emperors who took up Shantarakshita’s initiative to translate Indian Buddhist literature into Tibetan, an achievement of which every Tibetan can be proud.

Finally, His Holiness paid tribute to Baba Phuntsog Wangyal who died on 30 March recognising how he was regarded as a Tibetan hero.  Imprisoned in 1957 he remained dedicated to the welfare of the Tibetan people.  He invited everyone to say a round of manis together for Phuntsog Wanygal and those who have died for the Tibetan cause.