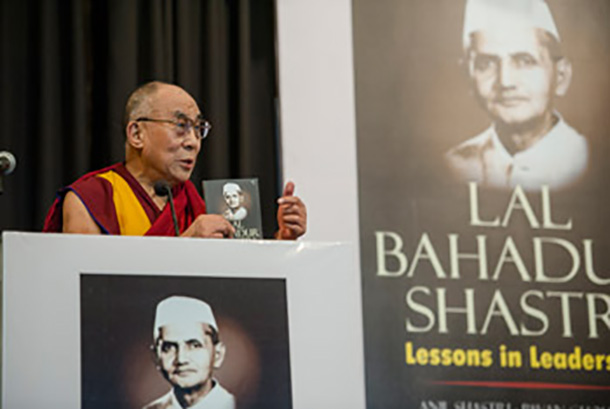 "He led this nation courageously during the Indo-Pakistan war (of 1965) and, at the same time, was very committed to solving other problems. "I am quite sure that had he lived for a few years more, he could have made significant contributions to this country," the Tibetan spiritual leader said.

According to a report by the Day & Night News, His Holiness was speaking at the launch of the book, 'Lal Bahadur Shastri: Lessons in Leadership', a biography of the former prime minister which has been co-authored by Shastri's son Anil Shastri and Pavan Choudhary. "I think he truly represented the tradition of (India).

The values of this tradition of a thousand years was represented by him courageously. He was a wonderful, determined person," His Holiness the Dalai Lama said remembering Shastri. Recalling his meeting with Shastri, he said,

"I'm one of the admirers of Shastri. I met him when he was the prime minister. He was really a great man. There was a big contrast between his body and his mind! As far as I observed him, he was a very compassionate man." On the book that recollects the childhood, adult years and the public life of Shastri, His Holiness the Dalai Lama said, "This small book may teach important lessons of life to everyone."

When the book is read by millions in India, I am certain it will leave them inspired," Anil Shastri said. Educationist and columnist Pavan Choudhary described the subject of their book as "the original 'aam aadmi' who lived an unpretentious life and rose to be prime minister despite his humble background and without bending the rules".

"I have highlighted those traits of Shastriji which made him the leader he was, a leader who taught us to live with dignity and honour," Choudhary added.