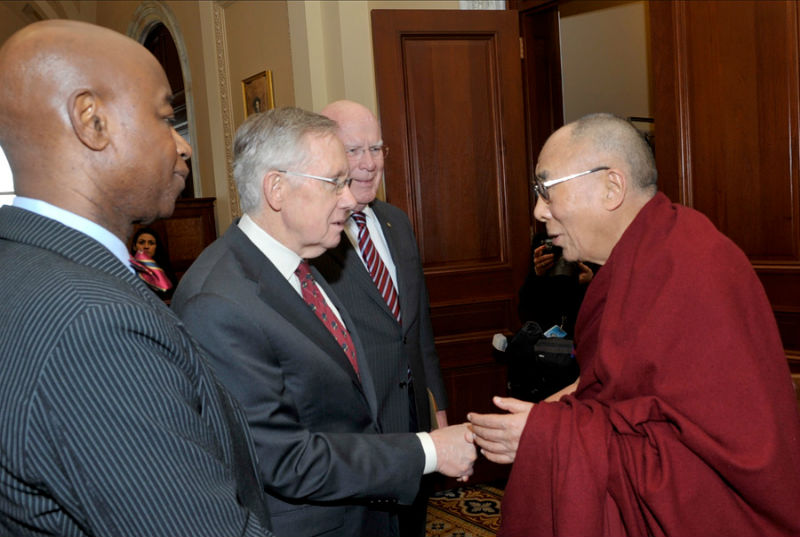 Washington, D.C. – Nevada Senator Harry Reid spoke on the Senate floor today to honor His Holiness, the 14th Dalai Lama of Tibet. Below are his remarks as prepared for delivery:

It is my pleasure to welcome to the United States Senate, His Holiness, the 14th Dalai Lama of Tibet. I know I speak for the entire Senate family when I express our gratitude for that beautiful prayer, and for his words of encouragement and blessing.

His Holiness, the Dalai Lama, is well known throughout the world as the spiritual leader of the Tibetan people, and for spreading the gospel of peace, compassion and love for our fellow beings. But it is tradition when the United States Senate welcomes a guest chaplain to say a few words about our honored guest.

His Holiness often says that he is only a simple monk, born to a farming family in northeastern Tibet. But to millions of people in Tibet and across the globe, he is much more – he is a source of hope and inspiration in a world that can sometimes seem dark.

When he was only two years old, His Holiness was recognized as the reincarnation of the 13th Dalai Lama. Four years later, when he was just a little boy, he began his monastic education. He studied logic, art, Tibetan culture, and Buddhist philosophy, among other things. At 23, he passed his exams with honors and was awarded the equivalent of a doctorate of Buddhist philosophy. And for more than half a century, the Dalai Lama has been traveling the world, raising awareness about the concerns of his 6 million fellow Tibetans and, as he would say, making new friends.

He motivates countless people around the world – people of every faith tradition – to practice compassion toward one another. His Holiness urges us all to, "Be kind whenever possible. It is always possible."

The Dalai Lama's teachings contain lessons for people around the world and within this chamber. His Holiness also advises us that, "The best way to resolve any problem in the human world is for all sides to sit down and talk." It is advice that those of us fortunate enough to serve our country and our constituents in the United States Senate should take to heart and follow more often. And the presence of His Holiness in this chamber today inspires me – as I hope it does all of us – to renew our commitment to speak and act with a pure mind and help dispel the misery of the world.