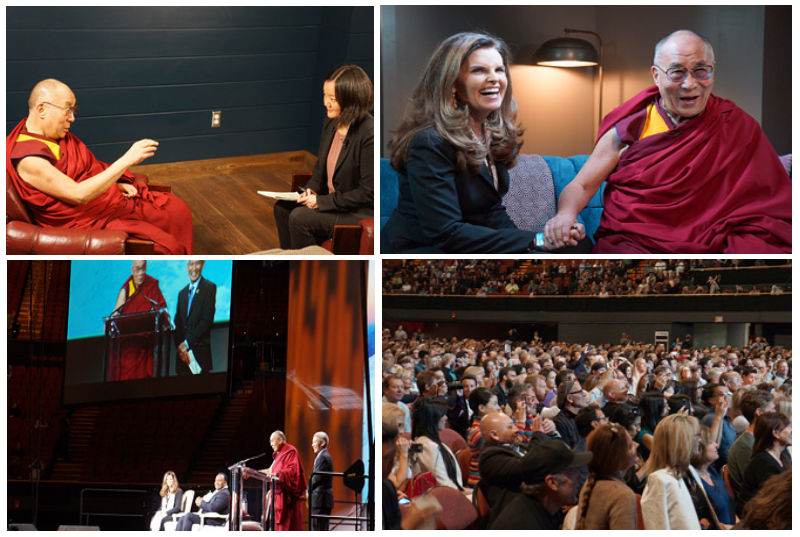 Los Angeles, CA, USA, 25 February 2014 - After a short flight from San Jose to Los Angeles today, His Holiness the Dalai Lama went directly to the Inglewood Forum, venue his public talk on 'Non-violence and the Effects of Compassion in the 21st Century'. Many thousands gathered to hear him.

Speaking beforehand to Barbara Chai of the Wall Street Journal he remarked that when he first came to Europe in 1973 and to the USA in 1979, not many people talked about compassion; now interest is widespread. However, it is still the case that when people who have grown up in a materialistic society face emotional stress, their only outlet is to turn to drugs or alcohol. When she asked about the new Chinese leader Xi Jinping, His Holiness told her that friends say he is more realistic. He cited the courageous stand he is taking against corruption and positive references in the recent 3rd plenum to improving the lot of poor farmers and improving the judicial system as grounds for hope. He said:

“The 1.3 billion Chinese people have a right to know what is really going on. They have the ability to judge right from wrong, in obstructing this censorship is detrimental. Meanwhile, it is important that the Chinese judicial system be raised to international standards.”

Meeting briefly backstage with celebrities who included actor Jim Carrey, basketball coach Phil Jackson and singer Eric Benét, His Holiness expressed his admiring appreciation of their work and their ability spread a message of happiness. He told them of the need to include training in warm-heartedness in education. In this context, Paul Eckman, a leading expert on the emotions, is interested to tap into the worlds of gaming and entertainment.

In a conversation with Maria Shriver for NBC News His Holiness confirmed his view that it is compassion and keeping a calm mind that are signs of strength and that anger is a sign of weakness.

His Holiness was met by a wave of applause as he walked onto the Forum stage. Welcoming him to Inglewood, the Mayor James T Butts said that people ranging from 1000 children to business executives had flocked to hear him. The Mayor read out and presented a proclamation declaring support and admiration for His Holiness. In her introduction that followed Maria Shriver said: “His Holiness’s message of compassion and peace has never been more important.”

“Respected elder brothers and sisters and younger brothers and sisters,” His Holiness began, “I’m very happy to be here. We all have the same potential, potential for good and bad. We all want to live a happy life and we all have a right to do so. Human beings have a remarkable brain, a significant intelligence, although sometimes if we use it poorly it can make us into the biggest trouble makers.”

He said that despite its many great developments, the 20th century had been an era of violence in which some say 200 million people were killed, including the horrific use of nuclear weapons. Now, at the start of the 21st century, violent situations like those taking place in Syria are symptoms of past mistakes and negligence. On this one planet where some live in the height of luxury others live in poverty, their children malnourished. His Holiness said that while the wealthy should share their good fortune, providing facilities and support, the poor need to take advantage of opportunities offered, build up their self-confidence and work hard. In this way the gap between rich and poor can be reduced.

Because of climate change and increasing natural disasters, the world’s 7 billion people must learn to work together. This is no longer a time, His Holiness said, to think only of ‘my nation’ or ‘our continent’ alone. There is a real need for a greater sense of global responsibility based on a sense of the oneness of humanity.

“Once we understand that like us other human beings want to live a happy life, and that our own future depends on others like them it will be easier to develop compassion. This is a question of survival,” His Holiness declared. “And in order to protect our sense of compassion, we need tolerance and forgiveness. These are the kind of qualities that are important in a healthy society, that are the basis of a happier more harmonious community. To achieve this in reality, we have been working on a curriculum to introduce secular ethics into our education system from kindergarten all the way up to university.”

His Holiness spoke of the beneficial findings scientists have recorded when people engage in simple training exercises in compassion even for as little as three weeks. Their stress levels and blood pressure decrease, while their ability to get on with the people around them improves. He also pointed out that of the several thousand smart people in the audience, those who were raised with affection are probably happier now than those who were not. Similarly, when there is affection between members of a family, whether they are well-off or not, they will be happier, whereas members of families who may be wealthy, but are beset by a deep sense of jealousy and mistrust tend to be unhappy. This, His Holiness said, is common sense. He told the story of the Catholic monk he met in Barcelona who had been in retreat in the mountains for 5 years meditating on love. He survived mostly on bread and water and yet his sparkling eyes revealed him to be full of joy, a living example that inner values are the key to real happiness.

“In America, this hub of innovation, we must apply innovation to our system of education. Those of you who belong to the 21st century, the future is in your hands. The past is gone, remaining only as a source of experience we can learn from, but the future is open; you can reshape it. Those of you who are young today can change the world. What you need is vision and determination.”

As His Holiness finished speaking, Sean Lourdes of the Lourdes Foundation stepped forward to express his thanks and appreciation. He also thanked Kusho Tenzin Dhonden, without whom the event could not have taken place. As His Holiness waved goodbye to the crowd, Lourdes said: “If we focus on hope, we can create a better world.”