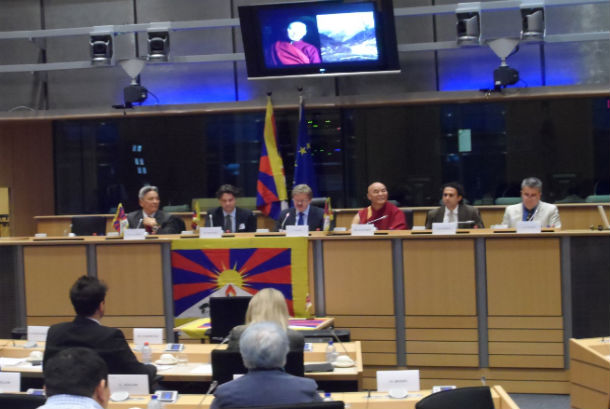 Brussels: - 'EU can play a leading role in the opening of a new page in Tibetan-Chinese relations,' Kelsang Gyaltsen, Special Representative of H. H. the Dalai Lama said while addressing the 100th Meeting of the Tibet Intergroup of the European Parliament, which held in Brussels, capital of the European Union.

"It is a great pleasure and an honour for my Tibetan colleagues and me to participate in this special meeting of the Tibet Intergroup of the European Parliament. This opportunity means a lot to us Tibetans,' Kelsang Gyaltsen said, adding: 'For it offers us the chance to express to you personally our sincere appreciation and gratitude for your sustained and committed support and solidarity with the non-violent freedom struggle of the Tibetan people.'

"Your support and friendship sends a clear message of hope, encouragement and solidarity to the people of Tibet at a time when Tibetans in Tibet are undergoing the harshest wave of repression and persecution since the Cultural Revolution. Last Thursday, Lobsang Dorjee, a 25 years old native of Ngaba county in Sichuan Province, became 126th Tibetan to resort to self-immolation to protest against the Chinese repression in Tibet. He is the second Tibetan to commit self-immolation in 2014.

As a Tibetan engaged in raising awareness and support for the cause of Tibet in Europe for many years, I am aware that there is a school of thought among politicians who consider public statements and resolutions condemning human rights abuses, calling for respect for human rights and peaceful conflict resolutions as empty gestures and window-dressing politic. They argue that such acts constitute a "loss of face" of the Chinese leadership and hence counter-productive. But on the other hand they are not willing to consider whether such restrain in avoiding the loss of face of Chinese leaders is also leading to the loss of more life of the repressed and persecuted people.

The so-called "silent diplomacy", which this school of thought favours, often result – whether deliberately or unintentionally – in evasion, denial and silence about oppression, injustice and abuse of basic rights and freedoms. This is psychologically and morally more devastating for victims of oppression and injustice than the actual repressive measures

In the case of Tibet we realize that there is little that can be done from the outside that immediately brings some improvements in the difficult situation of Tibetans in Tibet. However, statements of concern and support and resolutions on human rights violations in Tibet by distinguished bodies such as the European Parliament send the message to the people in Tibet that they are not forgotten, that Europe cares and is aware of their suffering and that Europe is committed in promoting a peaceful and just resolution to the issue of Tibet. This is a message with tremendous power to give hope and uplift the spirit of the Tibetans in Tibet. This is also the way to persuade Tibetans in Tibet not to loose hope and patience and not to resort to self-immolation in acts of protest. The Tibetan leadership in exile will continue to appeal to our countrymen to refrain from such drastic forms of protest.

Despite the very grim current situation in Tibet I believe there are grounds to entertain a degree of hope and optimism for some movements on the issue of Tibet in the near future.

First of all the spirit of resistance of the Tibetan people in Tibet has never been stronger than today. Tibetans in Tibet have never been more united and determined in reasserting and defending their distinct culture, religion, language and identity. The majority of Tibetans in the frontline of the protest are under 30 years of age. This is a clear indication that this popular resistance is to stay on for a long time to come.

Furthermore, with little notice taken outside of China a vigorous internal debate has been going on in China on policies towards the minorities. Such a national debate on minorities has been non-existent in China a few years ago. This is a clear indication of the increasing awareness and importance of issues related with minorities in China.

Moreover, there is a new leadership in China. According to information from Chinese sources within the new Chinese leadership there are people who feel that there is a need to address the problems in Tibet. But it also says that there is strong opposition to such views. The policy announcements after the Third Plenum of the Chinese Communist Party indicate that the top leadership will take more control of issues such as Tibet and Xinjiang. This is to be welcomed. So far the ossified and hard-line attitude of the entrenched party bureaucracy dealing exclusively with minorities policies has been the major obstacle to any changes on the Tibet issue. Moreover, the new Chinese leadership is yet to formulate and announce its thinking and policy on Tibet.

There is movement in China on issues that have a bearing on the Tibet issue. Because of these developments it is a crucial time for members of international community to engage the Chinese government on Tibet. There is a unique window of opportunity to act on Tibet. The European Union can play a leading role in the opening of a new page in Tibetan-Chinese relations under the new leadership in China which is marked by the spirit of dialogue and reconciliation.

For this to happen there is a need for robust, coherent and concerted efforts by members of the international community. In this context it is crucial that the Tibet Intergroup of the European Parliament continues to take the lead in international efforts promoting a peaceful resolution of the issue of Tibet through dialogue and negotiations. I am, therefore, appealing to you personally and to the leaders of the European Parliament to ensure that the next legislative of the European Union continues with the long and honourable tradition of championing the peaceful and just cause of the Tibetan people by reconstituting a strong and vocal Tibet Intergroup. The people of Tibet need your continued support and solidarity."