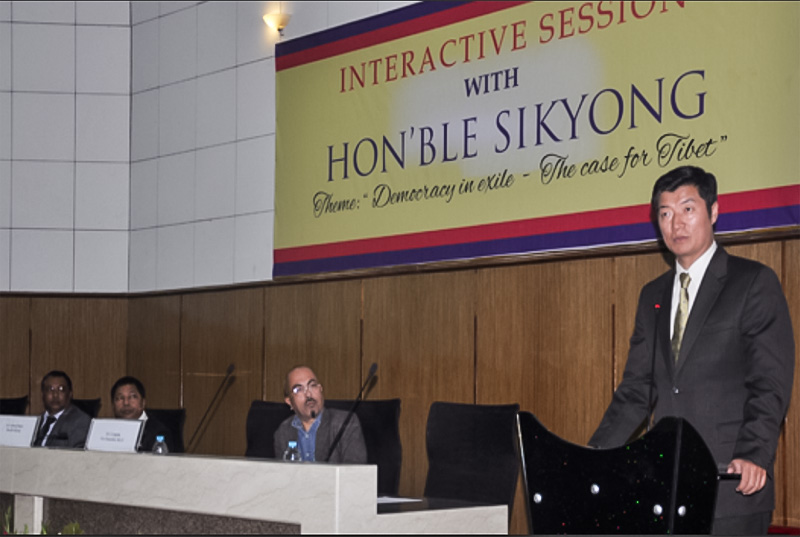 Dharamshala: After attending the opening day of the Festival of Tibet in Guwahati in Assam on 2 February, Sikyong of Tibet Dr. Lobsang Sangay travelled to Shillong, known as the Scotland of East.

This visit was arranged by the government of Meghalaya, and Sikyong was recognized as a State Guest. Tibetan spiritual leader His Holiness the Dalai Lama was also on a visit to Shillong as the State Guest during this same time.

The Governor and Chief Minister of northeastern Indian state of Meghalaya hosted receptions in honour of Sikyong Dr. Lobsang Sangay, a Harvard-educated scholar and the political successor to His Holiness the Dalai Lama.

In the morning, Sikyong attended a day-long teaching of His Holiness the Dalai Lama on the 37 Practises of the Bodhisattvas at the polo ground. He addressed the Tibetan public and met students at the Sambhota school as well.

Dr. Sangay addressed a distinguished audience of the top echelons of the state government and academicians at an interactive session on a theme titled: Democracy in Exile: The Case for Tibet." Top officials and academicians including Chief Minister Dr. Mukul Sangma, chief secretaries, principal secretaries, superintendent of police and vice-chancellor of Martin Luther Christian University and editors of the media, attended the event.

Sikyong spoke about the democratic process in the exile Tibetan community, the election process and the challenges he faced after being elected. "In 2011, His Holiness the Dalai Lama made a historic decision to devolve all his political authority to the elected leadership. With no experience in the administration, I ran for the election and got elected. As I was the leading candidate, I had to assume the responsibility. It is a daunting and a very difficult task to fill the shoes of a Nobel Laureate, global statesman, and one of the greatest spiritual leaders. However, based on my individual and the collective Karma of the Tibetan people, I chose to move forward and took the political responsibilities."

Sikyong spoke about the element of Tibetan democracy by recounting how he and other candidates campaigned for the leadership of the Central Tibetan Administration. "During the campaign, I and my counterparts shared the same taxi, room, and campaign tips. The Tibetan democracy is more of movement than a classic conventional election that we run."

Later in the evening, Sikyong attended a dinner reception and musical gala hosted by the Chief Minister.