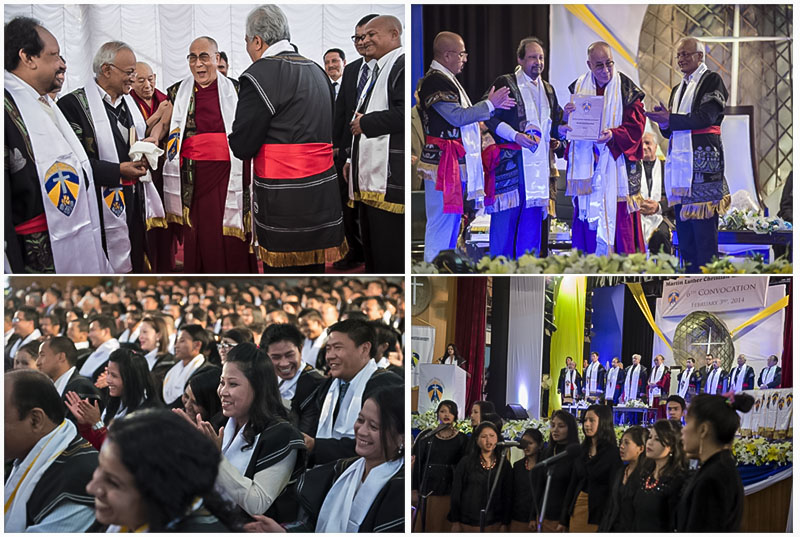 Shillong, Meghalaya, India, 3 February 2014 - India as a living example of how all the major religions can live together in harmony, His Holiness the Dalai Lama of Tibet said, adding that these are fields in which this country can lead the world.

His Holiness returned to Srimanta Sankaradeva Kalakshetra to give a White Tara Long-Life Empowerment. He performed the preparatory ritual while the 3000 strong audience assembled.

He took the opportunity to encourage his listeners to be 21st century Buddhists, not to be satisfied with blind faith, but to find out what the Buddha is, what the historical Buddha taught and how it can be put into practice in their own lives. He also released a newly published book by Tsering Tendar entitled 'From Mon-yul', which describes the religious heritage and history of that part of Arunachal Pradesh.

Following this His Holiness drove to Guwahati and then by helicopter to the former hill-station of Shilong. Many Tibetans and members of the public lined the road to wave and greet him. After lunch he visited the State Central Library where the Martin Luther Christian University had invited him to give the Convocation Address. Wearing the University's ceremonial robe he jokingly asked if there was a hat to wear, as the choir led a moving rendition of the National Anthem.

The Chancellor reported on the progress they had made in enabling their students to become capable global citizens. The Governor expressed the hope that His Holiness' presence would attract peace and prosperity to the state and extolled the role of the University in fostering equality and greater prospects in the lives of its students by greatly improving the quality of their education.

The University Choir sang a stirring song of good wishes for the future before an Honorary Doctorate of Philosophy was bestowed on His Holiness and the presentation of degrees and diplomas to the several hundred graduates began. Dignitaries on the platform, starting with His Holiness, and including the Governor, Chief Minister and Sikyong, were invited to participate in handing certificates to each graduate as they came up to the stage.

His Holiness began his speech by saying it was a great honour to participate in this ceremony and told the students that this is the start of your real life and would provide them with the opportunity to translate knowledge into action.

"India is the world's most populous democratic nation and since independence has proved to be remarkably stable. You young people can contribute to its further strength and development. When we look to the past, to the great ancient civilisations of Egypt, China and the Indus Valley, I believe the greatest number of wonderful thinkers derive from Indian civilisation."

His Holiness said that likewise, compared to modern psychology, the understanding of the mind and consciousness found in ancient Indian thought is very advanced. India continues to have a great contribution to make to knowledge today. Ancient Indian scientists had no laboratory as such, they worked with the mind and their experiments were undertaken through inner examination and analysis. He continued:

"Wherever I go, I always talk about India's longstanding tradition of ahimsa, non-violence, because of which there is also a great tradition of tolerance. I regularly praise this country as a living example of how all the major religions can live together in harmony. These are fields in which India can lead the world."

He said that whether we follow a religious path or not, as human beings we all need affection. Warm-heartedness gives rise to the self-confidence and inner strength that supports a calm mind. Peace of mind in turn contributes to our physical health. This is based on the fostering of basic human values that His Holiness promotes as secular ethics. He mentioned that while some of his Christian and Muslim friends elsewhere have expressed misgivings that the word secular is dismissive of religion and spirituality, he uses it in the way it is used in India to indicate equal respect for all religions and even for those who profess none. He said that of the 7 billion human beings alive today, 1 billion claim to have no interest in religion, and yet as human beings they also wish for happiness and have a right to achieve it. He feels it important that they also have the opportunity to appreciate the contribution compassion and warm-heartedness make to happiness.

His Holiness spoke of how Tibetans regard ancient Indians as their gurus and saw themselves as chelas or students. What's more, Tibetans have served as reliable chelas, keeping knowledge such as the Nalanda tradition alive and intact while it has declined in the land of its birth. He said he often describes himself as a messenger of India, promoting non-violence and inter-religious harmony. He encouraged members of the younger generation to develop experience of the principles of non-violence.

"When you face problems in your lives, don't resort to the use of force, try to employ dialogue to find a solution. Pessimism is a source of failure, while optimism is a source of confidence. Try to remain truthful. The power of truth never declines. Force and violence may be effective in the short term, but in the long run it's truth that prevails. Being honest and truthful engenders trust and trust leads to friendship and a good reputation. Because we all need friends, honesty and transparency are a basic aspect of human nature.

"May I be as bold as to say that while Indians are by and large a very religious minded people, at the same time there is a great deal of corruption. It seems even religion can be used to bully and cheat other people. Perhaps this is because the trend of modern education is towards materialistic values. It fosters the brain's need for knowledge while neglecting the needs of the heart. This is why we need a renewed sense of morality, of secular ethics."

His Holiness remarked that for nearly 55 years India has been his home. During that time he has been impressed that modern India is a country of many cultures, many languages and many religious traditions, there are different peoples following different lifestyles, all living together. This is India's greatness, which remains an example to the rest of the world. He said that he often tells Chinese who come to see him that they should learn from India. It is in such a context that he feels that Tibet's peaceful, compassionate culture, with its roots in Indian tradition, can also be of benefit to the Chinese people.

In conclusion, he said: "I'd like to express my appreciation of your giving me this honorary degree. It's quite something to have received such an honour on the very first day I came to Shillong."