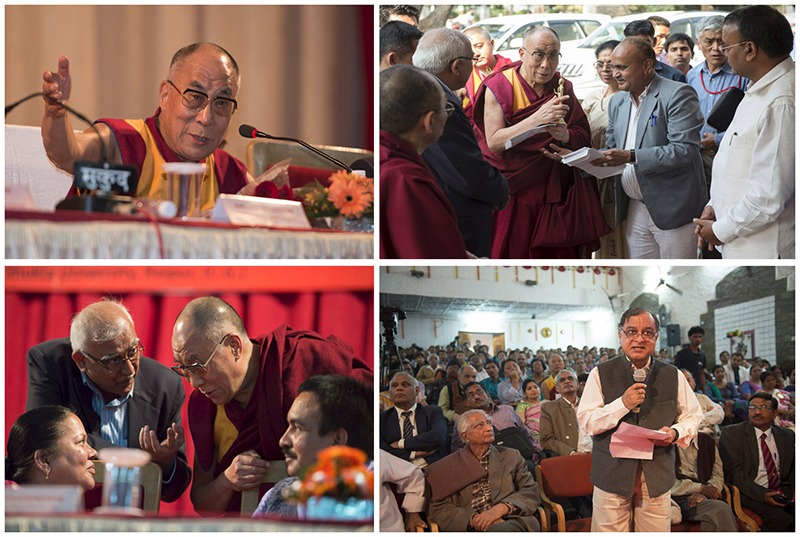 Raipur, Chattisgarh, India: - The spiritual leader His Holiness the 114th Dalai Lama of Tibet said on 14 January that people worship God and offer flowers just for the sake of rituals without knowing the meaning of it.

"In universities of countries like Japan and China, students have better knowledge of the culture than the monks who keep worshiping. I would like to promote Indian culture in the universities here," he said while inaugurating the national seminar on the philosophy of Nagarjuna at the Pandit Ravishankar Shukla University in Raipur, Chattisgarh.

Throwing light on the philosophy of Nagarjuna, Dalai Lama said, "Love, compassion are the only things that a human being should develop to become a good individual. Ultimate source of happiness is inner strength and self-confidence." "Knowledge in brain and experience in heart should come together. Non-violence does not mean doing nothing. It means no force no violence. I have faced a lot in my life. At 24, I lost my country; at 60 I have faced a lot of difficulties. But above all, one should be a good human being," he said.

Speaking on the occasion, chief minister Raman Singh said, "Nagarjuna is remembered for the Ayurveda and as a Medicinal Buddha. We are lucky that Chhattisgarh has the remains of Nagarjuna." Vice-chancellor of Central University for Tibetan studies Ngawang Samten and vice-chancellor of Ravishankar Shukla University SK Pandey spoke during the seminar.

Tibetan spiritual leader also visited the ancient Buddhist site of Sirpur and meditated at the historic 'Chaanda Devi' caves where Ancient Buddhist philosopher Nagarjuna is supposed to have meditated centuries ago. Located at the sprawling Singhadhruva terrain, Chaanda Devi caves is about 25 km away from Sirpur town in Mahasamund district, on the banks of the Mahanadi river.

"This place is full of natural beauty. My guru Nagarjuna meditated here and I felt his presence here today. It was very peaceful," His Holiness told reporters in Sirpur on January 14.

The 78-year-old Nobel Peace laureate climbed about 100 stairs to enter the cave and meditated for about 20 minutes in remembrance of Nagarjuna - a Buddhist philosopher - whom Buddhist monk considers as his teacher or Guru.