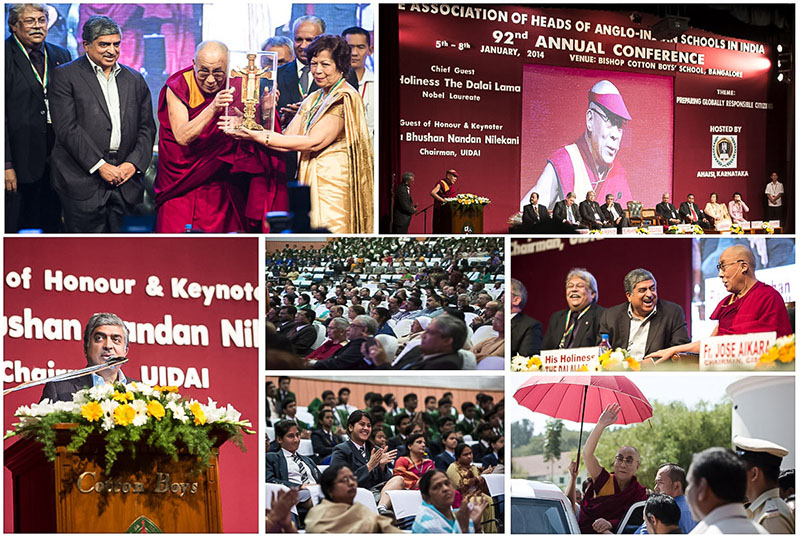 Bangalore: - His Holiness the Dalai Lama of Tibet on Sunday said 'we can only create peace on the basis of our own inner peace, because prayer alone will not put an end to violence in this world.'

His Holiness the Dalai Lama was addressing a gathering of All India Principal's Conference of the Heads of Anglo-Indian Schools in India on 5 January 2014 at Bishop Cotton School, Bangalore, the capital city of the Indian state of Karnataka.

The 79-year-old Nobel Peace Prize winner was graciously received on arrival by school Principal John Zacharia, who introduced him to fellow panel members, among them the Guest of Honour, Mr Nandan Nilekani, who is an old boy of the school.

"As human beings we all want to live a happy life, we want our days to be happy and we'd even prefer to have happy dreams. What's more we have a right to achieve such happiness. In order to do so, I believe we need to develop a clearer sense of the oneness of humanity; what we have in common," His Holiness said, adding: "Many of the problems we face today are our own creation. The sense we have of 'them' and 'us' leads to violence and deception. It also leads to corruption. If you respect others and have a concern for their well-being, this will not occur."

His Holiness said that "prayer alone will not put an end to violence. Violence comes about because we lack inner peace. And clearly, we can only create peace in the world on the basis of our own inner peace. The main disturbance in our minds that leads to our dividing beings into 'them' and 'us' is our self-centred attitude. Yet the reality today is that we are interdependent."

His Holiness cited the disasters that are occurring as a result of climate change as affecting us all, regardless of national and other boundaries. Without a sense of the oneness of humanity our man-made problems will only increase.

He said that as a Buddhist and someone who has studied and practised in the Nalanda tradition he has developed a great respect for our other religious traditions. They all convey a message of love, tolerance, self-discipline and contentment. They express different philosophical views because people in different places, living in different conditions have different dispositions.

Religious traditions counter anger and hatred with tolerance and forgiveness. Because anger is often linked to excessive desire and attachment, religion teaches contentment. Because the common good is their goal, we need to make an effort to eliminate conflict in the name of religion.

India is a living example that this can be done. Over the last thousand years all the major religious traditions have flourished in this country, living peacefully side by side.

"Meanwhile," His Holiness added, "Christian brothers and sisters have made the greatest contribution to education all over the world. Occasionally this seems to have been driven by missionary zeal. For example, I became aware that Korean Christian missionaries in Mongolia were attempting to convert the local people. I told them this is a Buddhist country and while it's admirable that you provide help with health and education, it's not appropriate that it should be at the cost of conversion. I give many talks abroad, in North and South America, Europe and so forth, but when I'm speaking in a Judeo-Christian country I make it clear that it is much better for people to stick to the religion they were born to.

"I'd like to tell you a story related to this. In the 1960s, the only work for a lot of Tibetan refugees was building roads. It was tough and for the family of a former Tibetan government official I knew things became very difficult when he died. After some time his widow came to see me and explained that she'd been given great help by Christian missionaries who were taking care of the education of her children. 'So,' she told me, 'in this life I'm going to be a Christian, but I'll be a Buddhist in the next life.' You see – a picture of confusion.

"There is a sound basis for building mutual respect among our religious traditions. On the other hand, I've seen reports that say that of the 7 billion people alive today, 1 billion claim not to believe in religion. And frankly speaking even among those who claim to believe, their practice is not very sincere. The spirit of the prayers they say doesn't seem to be carried into their daily life. It's almost as if their daily prayer is, 'Please bless me so my corrupt activities are successful'.

His Holiness once again expressed admiration for India's secular heritage, a secularism that has even extended to regarding the teachers of the Hedonist – Nihilist tradition of the Charvakas as Rishis or Sages. Because this is a multi-religious society, it has a secular constitution which expresses respect for all faiths and none, without bias. He said that such a secular approach should today be the basis for secular ethics.

He advised that we consider common sense and our common experience. We were all born from our mothers and benefited from her affection. Those of us nurtured by such affection grow into happy, confident people, whereas those deprived of such affection tend to carry a sense of insecurity, fear and mistrust into their later lives. He said we have an ability to show affection and concern for others because we have an early experience of affection ourselves. Scientific findings too show that fear, anger and hatred weaken our immune system, while warm-heartedness improves our physical health.

His Holiness suggested that we can only transform humanity and create a happier more compassionate world through education. That's why he places importance on encouraging a sense of secular ethics within the context of secular education.

"I think modern education is very materialistic, which will give rise to unhappiness and anger within people. So, while you teach them what they need to survive in today's world, you need to constantly teach them about inner peace. It need not be linked to any religion, but it's necessary to teach people to be content, love and not to develop a self-centric attitude which breeds hatred," he added.

He went on to say that corruption is the cancer of the modern world. It needs to be tackled, not neglected or overlooked. He recalled once talking to an MP in Orissa and lamenting the lack of help for the poor. The MP told him that provisions are made, but most of the money goes into other people's pockets. He said this is the case in China too.

"For the good of society we have to educate people about basic inner values. This is a country with a long tradition of non-violence. What we have to understand is that corruption is a form of violence."

A question from the floor noted that His Holiness speaks of the importance of inner peace and asked: "How is to be achieved?" He replied that it requires education and training. There needs to be understanding that anger never helps to solve a problem. It destroys our peace of mind and blinds our ability to think clearly. Anger and attachment are emotions that distort our view of reality. He mentioned that an American psychologist once told him that when people are angry they view the object of their anger as completely negative and yet 90% of this is mere mental projection. Adopting an unrealistic approach like this does not yield happy results.

His Holiness recalled an occasion from his own experience when he found applying mental training to be personally helpful. On 10th March 2008, the anniversary of the 1959 Lhasa uprising, he received news that demonstrations were taking place in Tibet.

The Tibetan spiritual leader said he felt apprehensive and helpless about the reprisals that were likely to occur. He applied a method in which he imagined taking the anger, hatred and violence from the concerned Chinese officials and giving them love and compassion. He said that while this had no practical effect on the ground it helped him retain his peace of mind.

He quoted the 8th century Indian Buddhist master Shantideva whose practical advice was to analyse the crisis you face. If you find there is a solution to it, there is no need to worry. On the other hand, if you find there is no solution, worry is of no use. He cited this as an example of how we need to use our intelligence and common sense.

He said change begins with the individual."Change yourself; think of the well-being of others. Share this attitude with your family and neighbours. Through education there is hope of changing society. It's not something that will be done by government or other organisations; it starts with individuals."

His Holiness expressed appreciation for the contribution that Anglo-Indian schools have made to India. He noted that India is the world's largest and most populous democracy and that its democracy, rule of law, freedom of speech and of the press has made it a much more stable country than several of its neighbours. He expressed his conviction that with self-confidence, honesty and transparency, India will build a successful future.