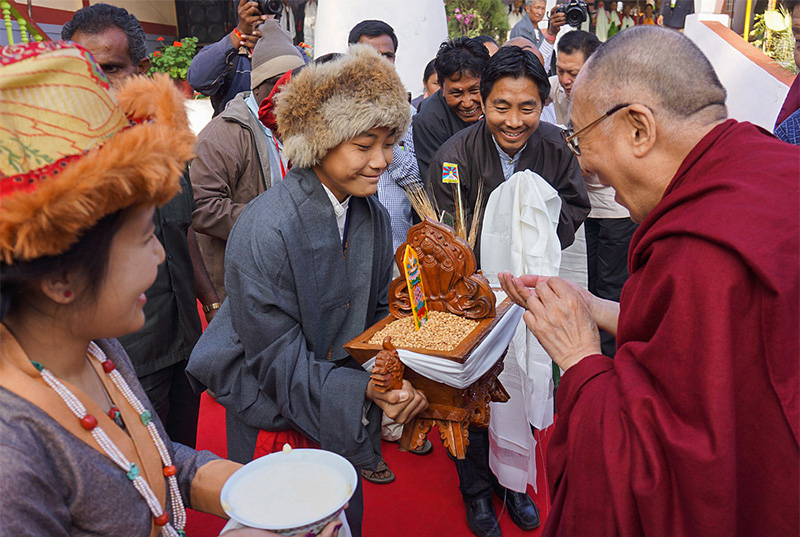 Dharamshala: - The spiritual leader of Tibet, His Holiness the Dalai Lama on Friday, January 5 praised the strength of Tibetans living inside Tibet, saying 'Tibetans' spirit only grows stronger' and its 'amazing.'

"We have quite a number of Tibetans from Tibet here and we're meeting in a free country. People in Tibet continue to hope that those in exile will not forget them. It's been 54 years since we came into exile and 64 years since 1949. And yet, the Tibetan spirit has not been subdued," His Holiness said after completing his ten-day teachings in South India.

Nobel Peace prize Laureate added: "Today, the spirit of even small children is strong. Meanwhile, hardliner, narrow-minded Chinese leaders may exert harsh authority over Tibet, but the Tibetan spirit only grows stronger. I'd like to express my thanks to those of you who here who represent the Tibetans in Tibet. I think you and your spirit are amazing."

"Before Buddhism came to Tibet, we didn't hesitate to fight, but since the arrival of Buddhism among us we have had a compassionate culture that is potentially useful for the world today. Westerners and Chinese who travel to Tibet see that Tibetans are especially compassionate," the Tibetan spiritual leader said.

"However, I have heard that some people are becoming corrupt. We should try to preserve and improve our reputation in the eyes of the world," he said, adding that "we need to keep our good name intact. And those of us in exile need to keep this in mind too."

His Holiness also spoke about the importance of preserving and promoting Tibetan language, culture and Buddhism. His Holiness added: "We are held together by our language and culture. Buddhism is a major part of our identity, so we should take interest in it as Tibetans.

"Those of you foreigners who are showing interest in Tibetan Buddhism can help because our religion and culture are at a crucial pass. Whether they will survive is not easy to say. I've tried all kinds of ways to pursue our just cause. We have to build a better more equal world through peace and non-violence. When we face problems we should apply non-violence. We need dialogue, sitting down together to talk problems through. The 20th century was a period of violence," he added.

His Holiness said "the 21st century should be an era of non-violence. Those of you abroad, who are showing interest and friendship here today, make people in your own countries aware of the situation in Tibet. Remember, as I often say, those who are friends like you are not so much pro-Tibetan as pro-justice."

“Then 200 years or so ago, science came into the picture. These days some neuroscientists have shown that mind and thought can bring about an impact on the brain. Consciousness with cognitive clarity can affect the brain. There are scientists who show interest in what I call Buddhist science,” he added.