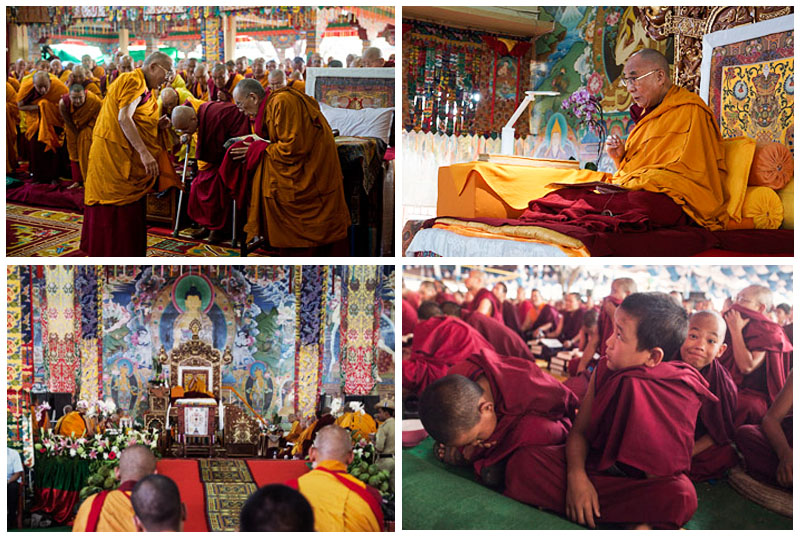 Bylakuppe, Karnataka, India, 26 December 2013: - The issue of Tibet is a struggle between the power of truth and the power of the gun, one day the sun will rise over Tibet, His Holiness the Dalai Lama said during his teaching in Bylakuppe, South India on 27 December 2013.

"We've been in exile for nearly 60 years, and for more than 60 years we've faced oppression. Yet the Tibetan spirit is still very strong. We have attracted support from many Chinese writers and intellectuals, who have expressed themselves in 200 articles published in China and 800 published elsewhere," the spiritual leader of Tibet said.

The 78-year-old Nobel Peace laureate said that "they support our Middle Way Approach, which doesn't seek to give defeat to one side and victory to the other. We're seeking mutual benefit. The strength and integrity of the Tibetan spirit remains. One day the sun will rise again over Tibet."

His Holiness added: "Tibet has been fragmented since 9th century, but today what unites the country and its people is Buddhism; not a political unity. The scriptures can be reorganized according to Buddhist science, philosophy and religion. While the religious section is really only of interest to Buddhists, Buddhist science and philosophy can be of benefit to the whole world. His Holiness explained that a book of Buddhist science has been compiled that will be published in the new year."

"When 13th Dalai Lama sent some Tibetans to England to be educated, the project was not a success because the abbots were opposed. They said that Westerners were our enemies and yet look where everybody runs to now if they get the chance. We made mistakes," he added.

His Holiness the Dalai Lama began the second day of his Stages of the Path teachings. "The root of enlightenment is compassion," he continued, "and different traditions emphasise compassion, but here we are talking about great compassion which is combined with insight into emptiness. Because we experience suffering of different degrees of intensity, we need to recognise its causes and see if we can overcome them. This is the context in which we cultivate great compassion with the intention of liberating all sentient beings and relieving them of their suffering."

He advised that we develop understanding through study, reflection and meditation. Bodhisattvas with sharp faculties cultivate the practice of exchanging self and others, about which there is no greater text than Shantideva's 'Guide to the Bodhisattva's Way of Life'.

Tibetan Buddhists study logic and epistemology and are the only Buddhist tradition to do so. This is particularly true of Sakyas and Gelugpas. They rigorously study the writings of 17 Nalanda masters, which is how they preserve and promote the Nalanda tradition. This is what they have been doing in the Three Seats (Sera, Drepung and Ganden).

"I remember the early days when you were staying in bamboo huts with the cool breeze blowing through. In those days Gyen Pema Gyaltsen, Khensur Lobsang Wangchuk from Sera and Shargo Khen, Gyen Nyima worked incredibly hard to ensure that we could provide a monastic education," His Holiness added.

"They were great masters and their students too were exceptional. The situation was such that I wanted to join you myself, but alas I had no time. Later, there was a period when there were monks coming out of Tibet, who strengthened the classes. Some of them returned to their native places in Tibet and worked to develop education there, this we can think of as a great contribution to the Dharma. Now that there are fewer qualified teachers than there were, all of you have to work hard and I'd like to express my gratitude to you."

His Holiness said that wherever he is in the world, he feels confident that the study of classic Buddhist texts is going on in the Three Seats.

His Holiness spoke of a Ladakhi friend who asserted that after three years cultivating concentration in retreat, his intelligence had declined. Others have reported similar experiences and His Holiness wonders if they properly understood subtle laxity and excitement in meditation. Repeating Je Rinpoche's qualm, "If you can't tame your own mind, how can you help others tame theirs prompted His Holiness to report that in Chengdu there are many so-called lamas prepared to sell the Dharma, their primary interest being money and sex.

Such complaints are not confined to Asia; His Holiness recalled a Western Buddhist Teachers conference in the 1990s in Dharamsala at which complaints were aired about misbehaviour among Tibetan and Zen teachers. At the time he asked what he could do about it:

"The Buddha has given clear advice, if these people won't heed him, why should they listen to me?"

He said that if directly reprimanding them was ineffective, they should be exposed in the media. This or that lama's misbehaviour should be made clear. If necessary the matter could be taken to court. He recalled a legal challenge that had been made in the US courts and one of the lama's students pleading that the Dharma would be damaged if he was punished or imprisoned. His Holiness made it clear that far from damaging the Dharma such an approach would purify it. He reiterated the option to use publicity to expose such errors. He also pointed out that in Tibetan society people take it for granted that lamas and tulkus have understanding and realisation. The clear advice in the Stages of the Path texts is to check and examine their qualities.

When His Holiness completed his reading of 'Essence of Refined Gold', which is a commentary on Je Tsongkhapa's 'Lines of Experience', he began the 'Gomchen Lamrim' by Ngawang Drakpa, which is a concise rendering of the approach of Je Rinpoche's 'Middle Stages of the Path'.

Coming back once more to the spirit of the Nalanda tradition and the use of reason and logic, His Holiness cited the case of Haribadra whose 'Clear Commentary' is an explanation of Matireya's 'Ornament of Clear Realization'. Haribadra belonged to a lineage descending from Asanga and Vasubandu, but had no qualms in explaining 'Ornament of Clear Realization' from a Madhyamaka point of view, despite Vasubandu's Mind Only stance. Atisha too studied for many years with Serlingpa, the greatest living exponent of the awakening mind of bodhichitta, in Sumatra. And yet he too continued to propound a Madhyamaka interpretation despite his teachers inclination to the Mind Only school.