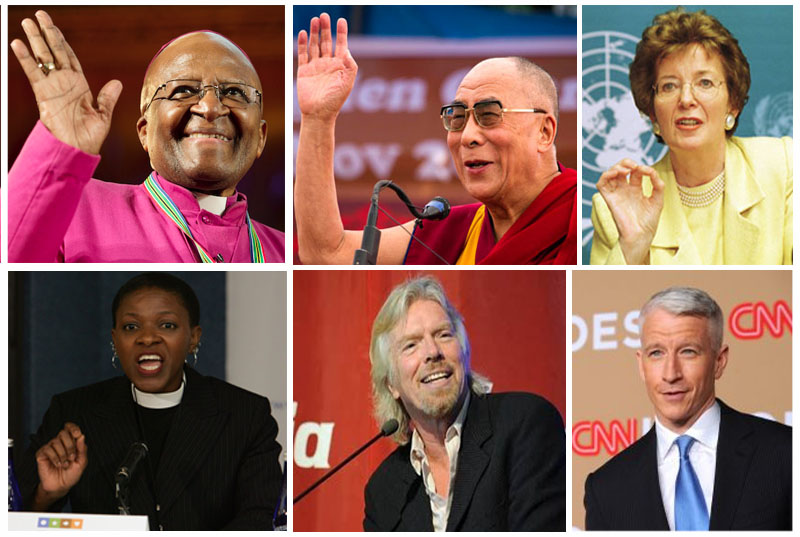 Dharamshala: - On 13 December, PeaceJam's One Billion Acts of Peace campaign based in Johannesburg hosted a 20-minute digital conversation via Google+ Hangouts On Air between Tibetan spiritual leader His Holiness the Dalai Lama, Archbishop Desmond Tutu, Reverend Mpho Tutu, former president of Ireland Mary Robinson, and Sir Richard Branson to honor the life and legacy of Nelson Mandela. His Holiness and Archbishop Tutu took questions from the public.

CNN's Anderson Cooper, who was the moderator, asked: "Your Holiness the Dalai Lama, one of the things often said about Nelson Mandela was his willingness to forgive those who had oppressed and those who had imprisoned him for 27 years. Where do you think that ability to forgive come from and is that something everybody can do in their life?"

In his response, His Holiness said: "Every human being has the potential. We grew up with tremendous affection of a mother. On top of that, Nelson Mandela practiced religious faith. Throughout his freedom and political struggle, I believe his main conviction came from his faith. I think my friend Archbishop Desmond Tutu followed the same principle. Mandela has strictly followed the Mahatma Gandhi's path of nonviolence. As he is no longer with us, his spirit should be within us and pass on to the younger generation. I expressed my sadness over his demise but I do not think that is enough. This sadness must be transformed into willpower to practice and hand over his legacy for future."

When asked what he would like to be remembered about the late president, the Archbishop replied that South Africans specifically, will always acknowledge that "...[Mandela] was a man who cared. He cared about us. He helped our country not go up in flames. He urged his people to forgive, to work for reconciliation." People will always remember "his compassion [and] his caring about other people."

Cooper then went on to ask what kind of man Nelson Mandela was, one-on-one. The Archbishop's daughter, Reverend Mpho Tutu responded saying, "I think the most striking thing about him was his humility. He had an incredible dignity in his manner and his carriage...he was not pompous at all. He was an incredibly gracious and gentle man."

Mary Robinson, former President of Ireland, and Sir Richard Branson also joined the conversation. On being asked by Anderson Cooper what legacy of Nelson Mandela people should pass on to the future generation as mentioned by His Holiness the Dalai Lama, the two said: "Mandela's life is his legacy, which embodies struggle against injustice and indomitable spirit to speak out for the marginalized people."

His Holiness the Dalai Lama met late South African President Nelson Mandela in 1996 and 2004. Mandela, the anti-apartheid hero and global icon of peace and reconciliation, passed away on 6 December at the age of 95.

As the whole world praised Mandela for his commitment to the principles of human rights, freedom, peace and democracy, the Chinese president Xi Jinping praised him as “an accomplished politician of global standing,” while state-owned China Central Television described him as “an old friend of China”.

This was to be a precursor for the following day’s censorship — which banned coverage referencing “freedom”,“democracy”, Mandela’s Nobel Peace Prize and foreign policy hot topics Tibet and Taiwan.

While President Xi Jinping did not attend Mandela’s funeral himself, his Vice President Li Yunchao did, and was booed by crowds as he made his memorial speech.

Mr Xi commented on Mandela’s bright smile, called him a “towering figure” and “an old friend of China”. There was no mention of “freedom” or “democracy”.