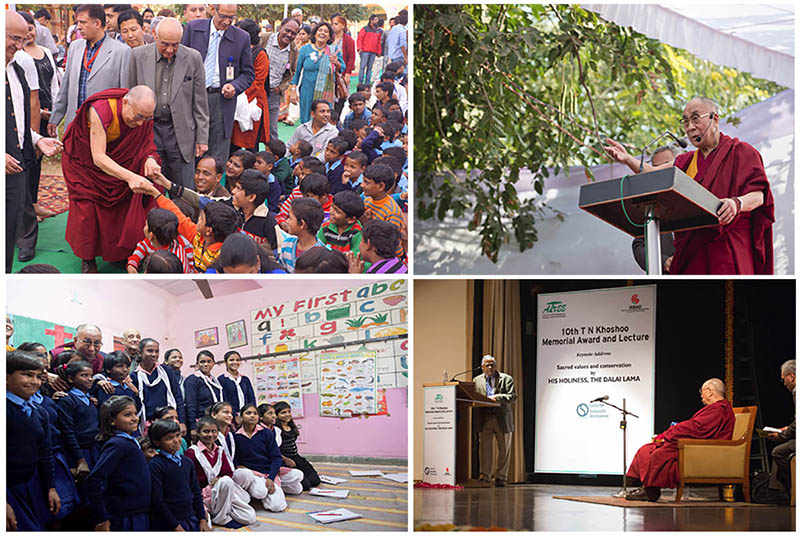 New Delhi, India, 7 December 2013 - His Holiness the Dalai Lama was a guest of Ashoka Trust for Research in Ecology and the Environment (ATREE) where he had been invited to present the TN Khoshoo Memorial Award and give a lecture. He was presented with a book published by ATREE entitled 'Himalaya: Mountains of Life'.

The award was started in 2004 to encourage and promote individuals for outstanding achievements in the field of conservation and sustainable development. Rashmi Bharti and her husband Rajnish Jain were the recipients of this years award for the development of handmade naturally dyed textiles, the dissemination of solar technology and water resource management to sustain rural lifestyles in the Kumaon region of Uttarakhand.

His Holiness began his lecture by saying that 'concern for the environment is very important' and noted that the population has grown significantly resulting in climate change and asked if the way we live is sustainable. He said ways needed to be found of preserving natural resources and that the gap between rich and poor is morally and practically indefensible.

His Holiness urged that lavish displays of wealth should be exchanged to provide a meal for the poor and suggested that peace in the world will come as a result of action rather than prayer.

His Holiness was asked who he is most impressed by and answered that on a human level we are all the same, essentially gentle and compassionate and suggested that if we give in to self-centredness we are more likely to be angry which can then lead to suspicion, fear and loneliness.

Over lunch he met with his old friend and supporter of the Tibetan cause, Kapila Vatsyayan. He was then driven to Mehrauli to visit a Care Home for Street Children. Here he made a short tour of the home meeting children and staff along the way. Harsh Mander, writer and social activist gave a brief introduction to the occasion.

He said that he'd been preparing to refer to the two most loved people in the world, Nelson Mandela and His Holiness, but now sadly only His Holiness remains. He described the Care Home as built on a sense of love and compassion, something His Holiness represents more than anyone. He added that His Holiness displays no anger or bitterness about his exile and that he has never heard him promoting Buddhism, rather he praises the qualities of other faiths. Harsh Mander then asked His Holiness to speak to the children and mothers in the Care Home.

His Holiness said that he was extremely happy to meet them and that there is a candour and straightforwardness about poor people not seen elsewhere and he speculated that maybe hardship keeps us in touch with reality. He spoke of the need to encourage a sense of the 7 billion human beings being part of one human family. If we see others as part of 'us' there will be no room to neglect them, he said. He urged the children not to feel homeless or helpless but to study and work and develop self-confidence just as he and his fellow Tibetans had done when they arrived in India.

His Holiness then presented a cheque for ten lakh rupees as a donation from the Dalai Lama Trust. In his closing remarks he said that if you give up, you make no progress, but if you work hard, keep up your confidence and determination, you will be successful in whatever you do and he urged them to grow up helping others without exploiting, deceiving or bullying them.