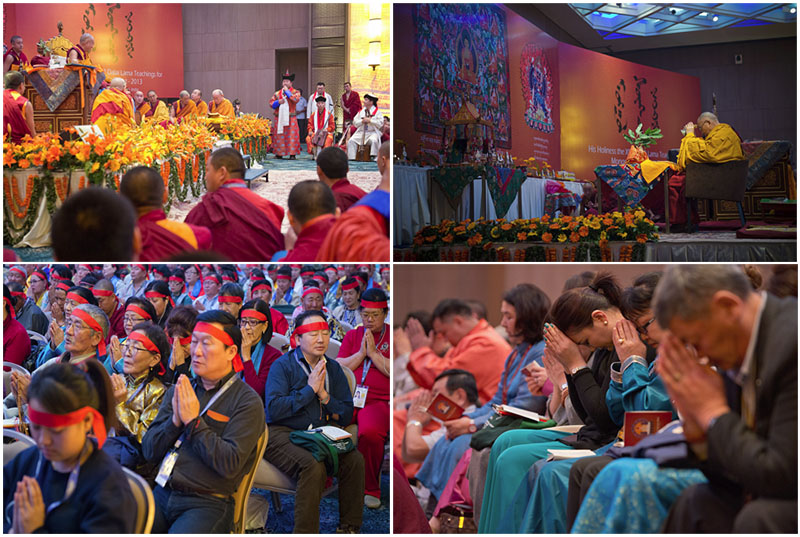 New Delhi, India, 2 December 2013: - A group of 818 Mongolian Buddhists along with 60 Koreans and 15 Tibetans converged in New Delhi to listen to teachings by His Holiness the Dalai Lama. Once he had taken his seat monks led a recitation of the Heart Sutra in Mongolian.

His Holiness began by saying that teachings mean both the teacher and disciples need to correct their motivation by taking refuge in the Buddha, Dharma and Sanga and generating the awakening mind of bodhichitta. Otherwise we might remain selfish, self-centred, inclined to harm others, to lie to them and to covet their possessions.

The three texts chosen for the teaching are 'Blazing Teaching' spoken by the Buddha and the 'Foundations of All Excellence' and 'Three Principle Aspects of the Path' by Je Tsongkhapa.

His Holiness observed the many ups and downs in Mongolia but noted that they are now reviving their Buddhist traditions. He said the question today is what is the benefit of Dharma. Material development gives us sensory pleasure which can lead to anxiety, attachment and anger. So the Dharma remains relevant today giving us self-confidence which attracts trust and brings us friends. Buddhists believe, he said, that the experience of pain and pleasure arises through causes and conditions. If you treat others well you get good results.

Because Buddha gave the Mahayana teachings in private some people have suggested that it is not the teaching of Buddha. To practice the Dharma, he continued, nuns and monks needed to be focussed, which entails developing single-pointed concentration and also developing the wisdom that understands selflessness.

His Holiness noted that the Sanskrit tradition of Buddhism entered China from the Silk Road but the Tibetan Emperor decided to seek Buddhism in India. He drew attention to Buddha's urging of his followers not to take his teachings at face value, to ensure the teaching continues to deal with reality. He also explained that everything is impermanent and nothing has intrinsic existence.

Before lunch His Holiness gave the transmission of a text known as 'Blazing Teaching' a praise of Dharma, composed by the Buddha and after lunch he began to teach the 'Foundation of All Excellence. One way to make our lives meaningful is to contemplate death, its inevitability and the uncertainty of when it will occur he added.

Resuming the teaching His Holiness ON December 3rd 2013 turned to the 'Three Principle Aspects of the Path' explaining that in the first verse were references to the Three Aspects, the determination to be free, awakening the mind of bodhichitta and the wisdom of the correct view.

HIs Holiness also talked about arguments in the past as well as the present about whether the Mahayana were really taught by the Buddha and the final status of Buddha.

After lunch His Holiness began the preparatory empowerment of Vajrabhairava, pointing out that for complete empowerment the disciple should hold individual liberation vows as well as Bodhisattva vows.