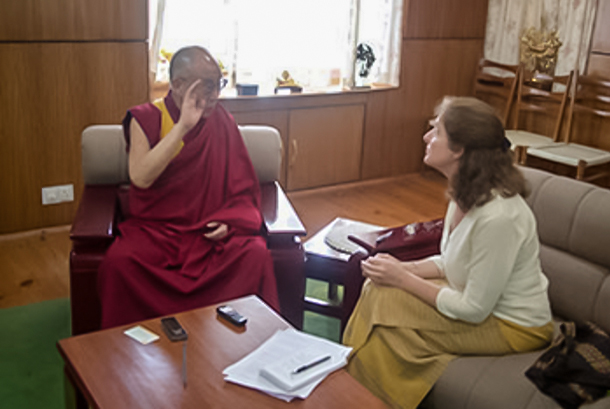 Dharamshala: - The spiritual leader of Tibet His Holiness the Dalai Lama has recently said that the Chinese government alone could stop the ongoing wave of self-immolation protests inside Tibet.

'China alone could stop the self-immolations because it was their policies of repression which was driving them to this extreme form of protest,' the spiritual leader of Tibet has said in an exclusive interview with the London based 'Financial Times' on November 9 in Dharmshala, India.

"If I created this, then I have the right to say, 'No, don't do'," he was quoted as saying forcefully. "This is their own creation: Tibetan people – inside Tibet. These people, I consider my boss. I am carrying their wish. I am not demanding, 'you should do this, you should not do this' ... The causes of these things are created by hard-line officials. They have the responsibility. They have to find ways to stop this."

The 78 year old Nobel peace laureate has also said it was very difficult for him to tell the Tibetans in Tibet to stop the self-immolations because he did not have any alternative to offer them, that he could not tell them to keep facing these unbearable difficulties.

"Those self-burnings: these people, not drunk. Not family problems ... The overall situation is so tense, so desperate, so they choose a very sad way ... It is difficult to say, 'You must live and face these unbearable difficulties.' If I have some alternative to offer them, then I [can] say, 'Don't do that. Instead of shortening your life, please live long, and we can do this and this and that.' But [I have] nothing – no alternative. Morally, [it's] very difficult. There is no other choice but to remain silent, and prayer. Clear?" he was quoted as saying.

His Holiness the Dalai Lama has also said that while Tibet was historically an independent nation, we must now "look forward and according to the reality," and that "it is (in) our own interest to remain within the People's Republic of China."

"I am optimistic," he says. "Whether they love me or not, the Tibetan problem is there." He laughs. "It's not only the Tibetan problem, but it's the problem of the People's Republic of China. They have to solve this. Using force failed. So they must now carry out a policy to respect Tibetan culture and Tibetan people."

His Holiness seems relaxed and confident, insisting he can convince most Tibetans – even independence advocates – to accept Chinese rule if genuine autonomy is granted.

"I have some moral authority among Tibetans. I can use it to persuade those Tibetans who want to separate," His Holiness said. He suggests China's leaders have far greater need of him than he of them.

"Talk with Chinese government for my interest? No," he says. "I am just a monk. Major portion of my life already gone. Remaining 10, perhaps 15 years, I can manage. I have a lot of friends in Europe, America, Canada." Again, he laughs. "I consider myself a citizen of the world."

"Many messages from Tibet – verbal messages, written messages, some old people, ask me, 'Please come back, the sooner the better,'" the Dalai Lama says. "But sensible people – writers, students, some retired officials – express that they prefer I should live in a free country. They feel, 'We have one representative in a free country.' That is their message.

"Many Chinese, particularly Chinese Buddhists, every week are now coming here. Many ask, 'Please don't forget us and please come back.' I tell them, 'Up to now, Chinese government considers me as a demon. So if a demon returns at airport, demon may well be put in handcuffs and bring to demon's palace – prison.'"

"Tibet is backward ... and also wants to modernise... His Holiness said. 'A number of Tibetans illegally went to America and Canada, not to seek spirituality but to seek dollars. Tibetans also love money. For that reason, remain in People's Republic of China. Plenty of money.'

"Our main concern is preservation of Tibetan culture – culture of peace, non-violence, ultimately a culture of love, compassion. That is really relevant in today's world," he says. "Millions of Chinese also need culture of love. Once there is a culture of love, honesty and transparency [will] come. Police and death sentence will not solve these things. Only if things change here," he says, pointing to his heart.

"The very meaning of autonomy is look after your own culture," he says. "Once that is fully implemented, we are very much willing to remain within People's Republic of China ... We Tibetans are historically separate. Doesn't matter. We can live together."