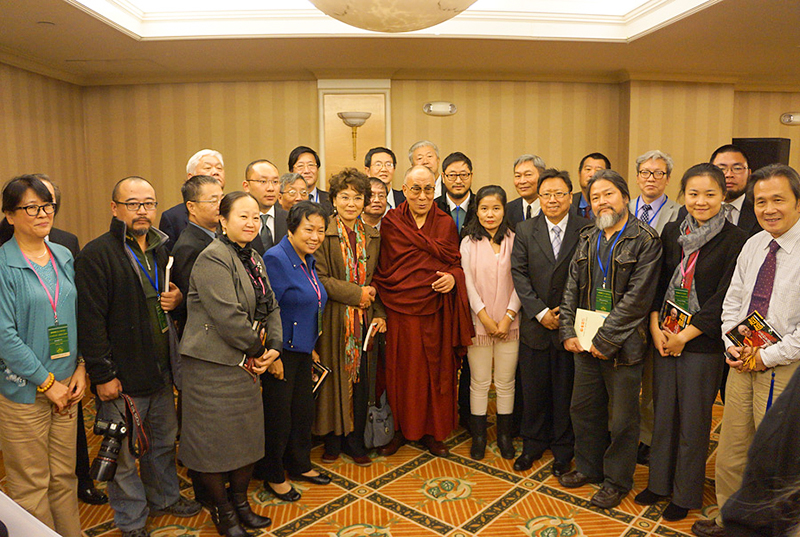 New York, USA 21 October 2013 – After three days of Buddhist teachings and a public talk in New York His Holiness the Dalai Lama 21 October 2013 met with groups and individuals on a more personal basis. He thanked the security personnel who had provided protection and the Tibet Center and Gere Foundation who organized the events of the past few days.

An animated encounter took place between His Holiness and 24 Chinese scholars, writers and poets who met to discuss promoting secular ethics, particularly in relation to China. The opening speaker, a writer, said he was concerned about the decline of ethical values in China. He described the Chinese people as realistic and hard-working and expressed admiration for the Marxist tenet of equal distribution. He observed that since 1955/6 the drive for power became predominant as China became increasingly materialistic and socialism gave way to capitalism.

His Holiness replied that as far as socio-economic theory goes he is a Marxist, albeit a Buddhist Marxist. Material development could not solve all society's ills and he observed that China has neither democracy or free press. If socialism had been implemented in earnest there would be no gap between rich and poor in China.

His Holiness recounted meeting a group of well-dressed Chinese, apart from one man wearing threadbare clothes and as he liked to support the underdog he had paid more attention to this man than the others and asked him about the conditions in his village. The man replied that conditions were bad and the leaders only cared about money and power. There was no one to turn to for help, he said, and there were many problems facing Chinese farmers.

His Holiness remarked that China's judicial system needs to be raised and declared censorship immoral, stating that the 1.3 billion people of China have a right to know about the reality in which they live. He said that censorship in China is morally indefensible and that Deng Xiaoping's "admiration to seek truth from facts is admirable, but the facts should be genuine."

China, His Holiness added, is the world's most populous country and has the potential to contribute positively to the international community but it needs to earn the world's trust, starting by trusting its own people.

He quoted Mao Zedong's injunction that the Communist Party should face criticism, but for telling the truth Liu Xiaobo was sent to prison. He expressed his happiness that Aung San Suu Kyi was now able to sit in the chair that had been kept empty for her at past Nobel Laureate meetings and looks forward to Liu Xiaobo attending in future.

The first questioner wondered how ethical values could be promoted in a Communist environment and noted that as Taiwan had not seen a similar ethical decline perhaps religion may have a role to play. His Holiness replied "that the whole world is facing a moral crisis, but relying on religion alone is not the solution." More than 1 billion of the world's population assert that they are not interested in religion and their needs also have to be taken into account. Ethical conduct needs to be understood in terms of its direct effect on individual and family happiness, he added.

In a multi-faith world no one religion would be universally acceptable, which is why His Holiness favours the promotion of secular ethics. He cited India's long tradition of secular thinking where religious and non-religious traditions are accorded respect.

"We need to incorporate training in secular ethics into our modern education system," he added.

His Holiness was asked about Hu Jintao and Xi Jinping in relation to Tibet and he replied that he supported the call for a more harmonious society but the use of force was the wrong way to achieve it. Xi Jinping could fulfil this objective by allowing peoples such as Tibetans their culture, language, religion and equal respect.

Harmony and unity have to be based on trust, which comes from showing friendly affection, His Holiness said. Harmony will not be secured by food and drink but must come from the heart, therefore, there is a need for a change in attitude.

It was suggested that the Chinese Communist Party had set out to destroy traditional Chinese values since its inception in 1922 and His Holiness replied that the purpose of holding elections in a democracy was because people trusted the government.

People in democratic countries elect representatives to act on their behalf and this is based on trust and accountability. When this breaks down and people on longer trust their government there are options to remove it.

China, he said, was subject to extremes of corruption not seen in Taiwan where they support democracy and traditional values. Concern was expressed that China's materialistic values would have a negative impact on Tibetans, but His Holiness did not entirely disagree. He pointed out certain drawbacks as in the Chinese Confucian system where the young are expected to revere their elders and students are not supposed to question their teachers.

His Holiness said that Taiwanese had told him of mainland tourist's reluctance to return as the people of Taiwan don't live in an atmosphere of fear. Chinese students in India have also complained about the atmosphere of suspicion where parents do not trust children and relatives are wary of each other.

Hong Kong's resistance to the denial of a properly elected leadership needed to assess what could actually be achieved, His Holiness said.

One writer when applying to join the Communist Party in the 1980's was asked to what he would give his greatest loyalty. His response "the interests of the people" and "the interests of the country" were both rejected and on been told that it "should be to the Communist Party" he realized he could not be a member. The writer looked forward to the benefit His Holiness's return to Tibet would bring China.

His Holiness agreed that laws were made in the interests of the Communist Party and he did not favour the potential chaos that might follow removal of the party. He recommended a gradual change to democracy, transparency and the rule of law, but agreed that an unchanged situation would almost inevitably cause a breakdown.

His Holiness asked if discussions like this could be held in China and was told that they could not. A suggestion was made that His Holiness could reach out to the people of China via the internet. This had already happened, he said, but he was ready to do so again as long as it didn't result in negative consequences for those concerned.

Later, His Holiness was interviewed by Norah O'Donnell from CBS Morning News where he outlined his commitment to talk to people about the importance of inner peace for human happiness.

After a brief meeting with Tibetan NGO representatives His Holiness gave an audience to members of the Tibetan community. He urged them to keep up their use of the Tibetan language and commended the excellent command of Tibetan among the Tibetan Muslim community in Srinagar where he met Tibetan-American parents who allow their children to grow up speaking only English.