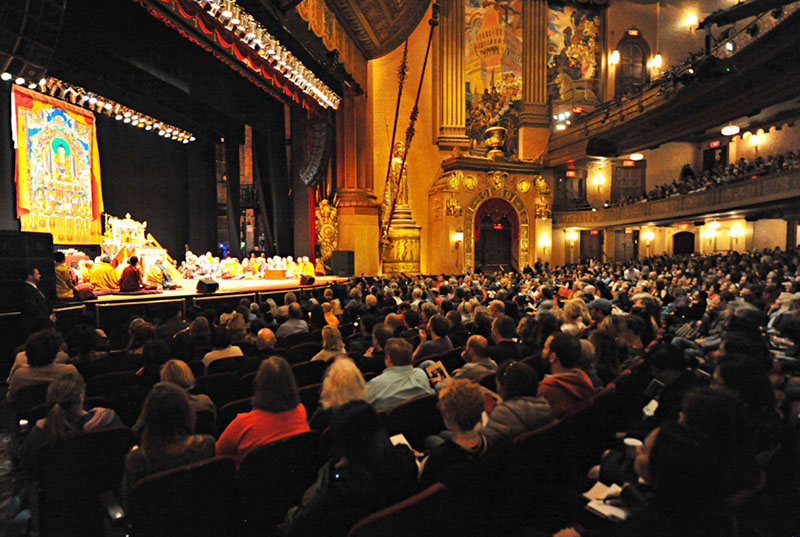 New York: The public talk by the spiritual leader of Tibet His Holiness the Dalai Lama capped two days of spiritual discourse which he gave to over 3,000 people in sessions hosted by Hollywood actor Richard Gere's foundation.

Stressing that meaningful autonomy for Tibet would be mutually beneficial to Tibetans and the Chinese, the 78-year-nobel peace laureate said he is not seeking a separate Tibet but one which remains within China.

"The middle way is in everybody's interest," he said according to a report by PTI, referring to his model of Tibetan autonomy which would be on the lines of a Hong Kong or Macau, which have been given political and economic autonomy.

"We want modernised Tibet. Give us meaningful autonomy so that we can carry preservation of Tibet's culture, language and tradition...Preserving Tibet-Buddhist culture is also in the interest of Chinese Buddhists," he said, adding that preservation of Tibetan ecology is in the interest of not only Tibetans but China, India, Pakistan and Bangladesh.

China's new leadership should use "common sense" and seek truth from fact, His Holiness has said in New York, as he expressed hope for some "indication of change" in approach during Xi Jinping's presidency to bring about harmony and unity in the region.

He gave a public talk Sunday, October 20 on the 'Virtue of Non- violence' and told a packed theatre of hundreds of followers that he would like to talk with the Chinese government "when the opportunity comes" and stressed that Tibetans are not seeking independence from China but "genuine autonomy".

The public talk by the Tibetan leader capped two days of spiritual discourse which he gave to over 3,000 people in sessions hosted by Hollywood actor Richard Gere's foundation, according to .

He added that many Tibetans across the world, including in India and the US, have been demanding "complete independence" but do not know how to achieve it. "We have to be realistic, seek truth from fact." He said the regime of Jinping's predecessor Hu Jintao focussed on a "good idea" of promoting harmonious society but use of censorship and force by the regime was a "wrong method" and only brought more fear in the hearts of people.

His Holiness said he is "hopeful" that "there is possibility of some indication of change" that the new leadership in China will focus on harmony and unity. He further said that harmony is very essential in a country like China which has a huge population and many ethnic groups.

The Tibetan leader said events of the past like the Tiananmen Square protests created "resentment" among the people and added that harmony is related to trust, which can be build through respect and dialogue.

He said truthfulness and transparency are very important for building trust. "If you bring more security personnel and censorship, then more fear will come. Fear and trust cannot go together." He said he is still waiting for an opportunity to return to his homeland and undertake pilgrimage.

"My desire (to return to his homeland) is always there." When asked what advice he would give to his successor, His Holiness the Dalai Lama laughed and said, "whether there is a 15th Dalai Lama or not nobody knows. If 15th Dalai Lama comes, (it means) I am no longer there."

He added that his advice would be that his successor should focus on his studies. "When I was young I did not pay much attention to studies. I was too lazy. I still regret that," he said.