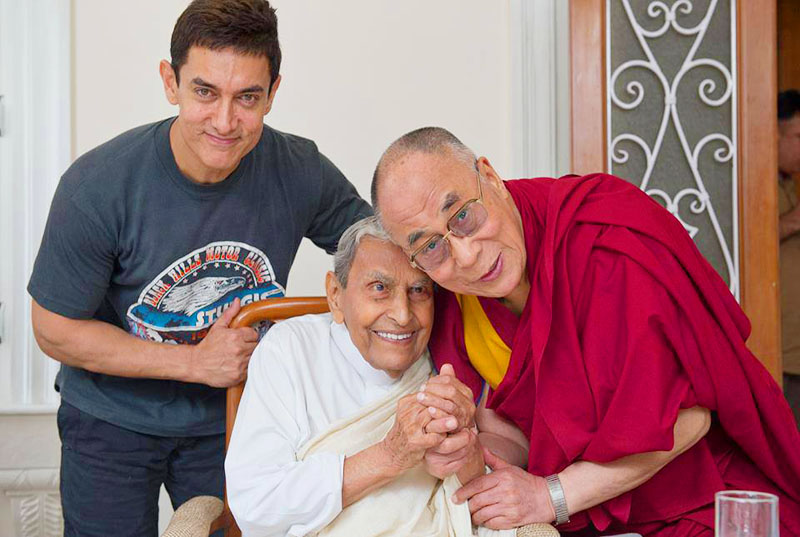 Pune, Maharashtra: - The spiritual leader of Tibet His Holiness The 14th Dalai Lama, who was on a three-day visit to the second largest in the state of Maharashtra has urged Indians to imbibe and practise its ancient values of non-violence (Ahimsa) and religious harmony as developed by leaders such as Mahatma Gandhi.

According to media reports, a lecture organized by spiritual organization Buddhayan Mahasangha, His Holiness said that India was a home of great thinkers, philosophers and spiritual masters. "In the three to four thousand years, this land has produced many thinkers. Indians are the spiritual teachers of Tibetans and all our knowledges come from India's spiritual roots," he said.

The Tibetan spiritual leader inaugurated a Tibetan Pavilion at the Shivaji Maharaj Museum of Indian History on Wadgaon Shinde Road. The Tibetan Pavilion is an exhibition of text and pictures on the travails of Tibetans over the last 60 years. He also participated in an interactive session, 'Ru Ba Ru Roshni', with spiritual leader Dada J P Vaswani that was hosted by actor Aamir Khan.

In a discussion moderated by actor Aamir Khan, the two leaders motivated the spiritually-charged audience to follow the path of love, compassion and forgiveness to attain happiness.

His Holiness the Dalai Lama urged the rapt audience to inculcate moral values and ethics in children from an early age, which would empower them to respect all religions and humans. "Secularism means respecting all religions. One can be secular even while being a non-believer. By teaching children the right values, one can empower them to make the distinction between wrong action and the actor," he said, adding that service of humanity is the biggest form of prayer to god.

"For the entire world, India has always been the proof that different religions can co-exist without conflict. I consider myself as the messenger of that ahimsa which has always been upheld by India," he said.

A similar message came from Dada Vaswani, who urged the gathering to differentiate between action and its source as the way towards forgiveness. When asked for advice for the country ahead of the 2014 Lok Sabha elections, Dada Vaswani said there is no scope in party politics, but in coming together as one. "Governments come and go, but the conditions remain the same. The only way there can be any real change is when all political parties come together to work for the emancipation of the people," he said.

Explaining that politics creates divisions in the community, Vaswani said belief in god is more important than being part of any community. "No one will ever indulge in any wrong-doing if there is faith that there is a supreme power which is watching all humanity. Let us bring back god into our lives and homes," he said.

A unique miniature painting exhibition on Maharana Pratap held at the same function on Sunday.
The function included Tibetan prayers and a meeting with architect Girish Doshi, who made a brief presentation on future plans of the museum. This was followed by speeches by His Holiness the Dalai Lama, Pawar and Uddhav, apart from a jugalbandi directed by singer Vikam Hazra.

The 5,000-strong audience, which had gathered to hear the two spiritual leaders interact with actor Aamir Khan, was not disappointed as the trio shared some lighthearted moments while speaking on their views on love and compassion.

While Dada Vaswani admitted that he too had known the feeling of 'love' in his younger days, the Dalai Lama said it is more important to recognise the inner beauty of a human being than run after physical attractiveness for happiness in marital relations.

Aamir Khan concluded the two-hour long discussion by urging the audience to be compassionate even in competition and to see even the opponent as a human being.