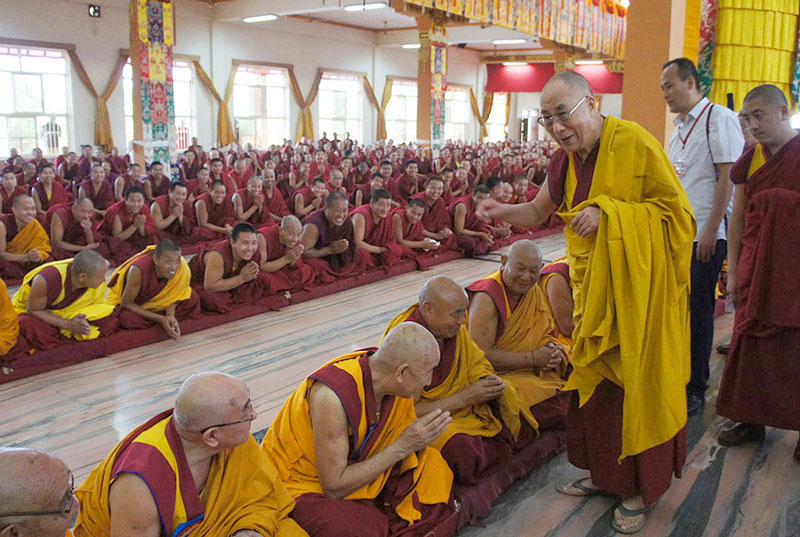 Mundgod, Karnataka, India: - Amidst tight security, the spiritual leader of Tibet, His Holiness the Dalai Lama arrived in Mundgod Tibetan settlement from Shimoga by road, on Wednesday, July 17, 2013. He was given a warm welcome by the district administration and local Tibetans.

According to the Deccan Herald report on 18 July 2013, the deputy Commissioner Imkongla Zamir greeted the Tibetan leader with a bouquet near Sanavalli located in the border of Mundgod taluk.

Right from morning, Tibetan Buddhist monks, women and children were standing in a line from Doddakere in Mundgod to Camp No. 6, to welcome the Dalai Lama in a traditional way. Despite the drizzle, they enthusiastically waited for the spiritual leader with a white cloth, flowers and 'Dhoop Batti'. While visually impaired students welcomes His Holiness with national flags near the Ammaji tank in Mundgod, Tibetan women accorded a grand reception clad in traditional attires. At Camp No. 3, the students and teachers of Kendriya Vidyalaya No. 3 gave a musical welcome to the Buddhist leader.

For the first time, welcome arches had been installed right from Mundgod to the settlement camps, to greet the Buddhist leader. Though cloudy weather prevailed in Mundgod, the Tibetans were fresh and enthusiastic to receive Dalai Lama. They had made all their preparation for their Guru. Large crowds had gathered at various spots at Mundgod and the settlement camps. People thronged to have a glimpse of the Dalai Lana at Kambargatti Cross and Shivaji Circle. His Holiness also waved at the followers from his vehicle and accepted the greetings.

As soon as the spiritual leader reached the Drepung Lachi Monastery, the Tibetan Buddhist monks played the traditional musical instruments. Wearing a traditional long yellow cap on his head, a monk opened a huge umbrella and the other senior monks lent a helping hand for the Dalai Lama to descend from the vehicle. His Holiness the Dalai Lama then offered a special prayer at the Drepung Lachi Monastery.

"In wake of the Bodh Gaya incident, the security for His Holiness the Dalai Lama has been beefed up", informed SP R. Dileep.

Speaking to reporters at the Drepung Lachi Monastery in Camp No. 6, the officer informed that the security has been tightened in and around the monasteries where His Holiness the Dalai Lama will attend the programmes.

Following the serial bomb blasts at Bodh Gaya in Bihar recently, Union Home Ministry had written a letter to the chief secretary of Karnataka to beef up security for His Holiness the Dalai Lama as he had decided to tour Karnataka from July 10.