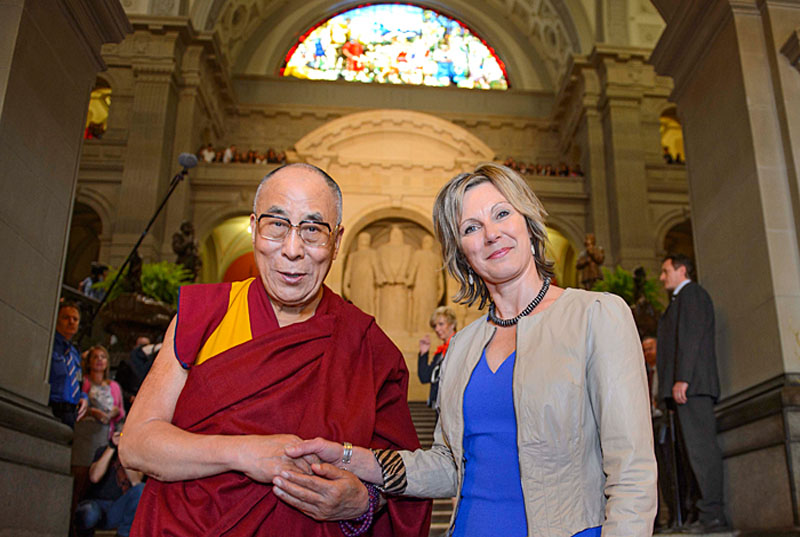 Dharamshala: - Addressing the Switzerland-Tibet Parliamentary Group that has taken up the issue of Tibet with the government for 25 years, His Holiness the Dalai Lama the spiritual leader of Tibet Tuesday said it was a great honour to speak to elected representatives of the people.

The Nobel Peace Prize laureate described his efforts to foster democracy among Tibetans since 1952, culminating in his passing his political responsibilities to the elected leadership in 2011.

His Holiness stated that Tibet supporters were not so much pro-Tibet as pro-justice and reiterated that the Tibetan struggle was determinedly non-violent. Following appeals in vain to the UN in the 1960s, the Tibetan administration concluded in 1974 that sooner or later they would have to talk directly to China. At the time the Cultural Revolution was in full swing.

In 1979, they made formal contact and in the 1980s Hu Yaobang visited Lhasa and apologised for what had taken place. However, policy hardened after he was dismissed and hardened further after the Tiananmen Square incident.

His Holiness said that although contacts with China ceased in 2010, support for the Middle Way Approach has been growing among writers and intellectuals and other members of the Chinese public.

"It may be that the new leadership will take a more realistic view, but it's too early to say. Meanwhile, among our concerns is the preservation of Tibetan Buddhism, an ancient culture that remains relevant today, and Tibet's fragile ecology. At the same time generations change, but the Tibetan spirit remains strong."

The final event of the afternoon was a meeting with the Press preceded by representatives of each of Switzerland's seven political parties voicing concern about the ongoing situation in Tibet.

They expressed support and solidarity with the Tibetan people and called on the Swiss government to pay as much attention to respect for human rights, democracy and the rule of law as to Switzerland's impending free trade agreement with China.

"I have visited this country several times since 1973," His Holiness said, "and I'm happy to be here again. It seems that support for the Tibetan people is increasing thanks to you."

He mentioned his retirement from political responsibility and sketched out his three commitments to promoting human happiness by talking about human values, fostering inter-religious harmony and that as a Tibetan, and someone in whom Tibetans repose their trust, he remains a free spokesman on their behalf.

In conclusion he referred to meetings he has held with Chinese students and activists who have expressed support for the Middle Way Approach and stated clearly that if the Chinese people as a whole were aware of it, they would support it too.