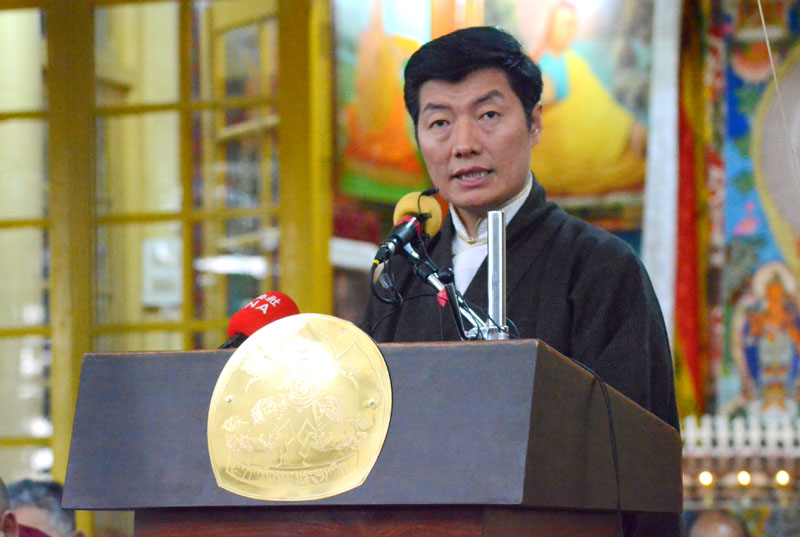 Dharamshala: - On March 10, 2013, Thousands of Tibetans and supporters led by the elected political leader of Tibet Dr Lobsang Sangay and other heads of the three pillars of democracy of the Central Tibetan Administration took part in the official commemorations of the 54th Tibetan National Uprising Day at Tsuglak-Khang, the main temple in Dharamshala, Northern India earlier Sunday.

The following is the full text of the statement of Sikyong Dr L-kobsang Sangay on the 54th Anniversary of The Tibetan National Uprising Day.

On this day in 1959, thousands of Tibetans from all walks of life and all three regions of Tibet (U-Tsang, Kham and Amdo) converged in Lhasa to resist and protest the Chinese invasion and occupation of Tibet. We are the children of this tragic yet historic moment in Tibet's rich, unique, 2,000-plus year history. Today, we are gathered here to re-dedicate ourselves to the brave struggle started by the selfless elder generation. We pay tribute to all those who have sacrificed their lives for Tibet. The yearning for freedom that moved our elders to undertake the epochal events of March 10, 1959 is a beacon that guides our present-day struggle to secure our basic freedom, dignity and identity.

The continuing vicious cycle of repression and resentment in Tibet is manifested in the devastating number of Tibetans setting themselves on fire. Since 2009, 107 Tibetans have self-immolated including 28 in November 2012 just before and during the 18th Party Congress of the Chinese Communist Party. Sadly, 90 of them have died. Such a high toll is perhaps unprecedented in recent world history. Though most of the self-immolators are monks, their ranks include the full spectrum of Tibetans – nomads, farmers and students – from all three Tibetan regions of U-Tsang, Kham and Amdo including the capital city of Lhasa. We dedicate this day to all the self-immolators and those who have died for Tibet.

The occupation and repression in Tibet by the government of the People's Republic of China are the primary conditions driving Tibetans to self-immolation. Tibetans witness and experience China's constant assault on Tibetan Buddhist civilization, their very identity and dignity. They deeply resent China's demonization of His Holiness the Dalai Lama. They look on with alarm as Chinese settlers stream into Tibet, taking away Tibetan jobs, land and their very future – –and in the process, transforming Tibetan towns and cities into Chinatowns. They oppose the forced removal of hundreds of thousands of nomads from the grasslands to permanent ghettos, reducing formerly self-sufficient families to impoverishment. They see colonial-like development activities cart away billions of dollars worth of Tibetan natural resources to a resource-hungry China. These policies could easily lead one to suspect that China wants Tibet but not the Tibetan people.

Yet when Tibetans respond to these violations with even the slightest show of dissent, they risk prolonged imprisonment, torture, public humiliation and disappearance at the hands of security forces. The prohibition of peaceful protest and harsh punishments compel Tibetans to resort to self-immolation. They choose death rather than silence and submission to the Chinese authorities. Recent attempts by the authorities to criminalize self-immolators, and persecute their family members and friends through sham trials are likely to prolong the cycle of self-immolation, persecution, and more immolation.

Through various media, the Kashag has consistently appealed and categorically discouraged Tibetans in Tibet from self-immolating as a form of protest. Life is precious and as human beings we do not want anyone to die in such a manner. As Buddhists, we pray for the soul of the deceased. As Tibetans, it is our sacred duty to support the aspirations of Tibetans in Tibet: the return of His Holiness the great Fourteenth Dalai Lama to Tibet, freedom for the Tibetan people, and unity among Tibetans.

The only way to end this brutal and grave situation is for China to change its current hard line Tibet policy by respecting the aspirations of the Tibetan people.

The Kashag is fully committed to the Middle Way Approach, which seeks genuine autonomy for Tibetans, to solve the issue of Tibet. His Holiness the Fourteenth Dalai Lama has shown this to be the most viable and enduring approach. After careful deliberations, the Tibetan Parliament-in-Exile unanimously adopted the Middle Way Approach. It is supported by Tibetans inside and outside Tibet, and has garnered the support of key foreign governments, world leaders, and Nobel laureates. It has, in particular, resonated and supported by a growing number of Chinese intellectuals, scholars and writers.

At this time, the Kashag hopes that the new Chinese leadership will view this pragmatic political approach, which bridges both Tibetan and Chinese interests, as a win-win solution. In 2002, the resumption of dialogue gave hope to Tibetans for a peaceful resolution of the issue of Tibet. Unfortunately, this hope has been shaken by the present stalemate in the dialogue process.

Tibet is not a constitutional or an institutional problem for the government of the People's Republic of China. As per Article 31 of the PRC Constitution, China has created a separate institutional mechanism of one country, two systems for Hong Kong and Macau. The Chinese leadership has also displayed the political will by forming a cabinet level committee to deal with Taiwan (Republic of China). However, when it comes to Tibet, the Chinese leadership has neither employed the available constitutional mechanism at its disposal, nor has it shown the political will to resolve the issue peacefully. From our side, we consider substance primary and process secondary, and are ready to engage in meaningful dialogue anywhere, at any time.

Finding a just and lasting solution to the issue of Tibet is also in the interest of the world at large. Tibet, one of the oldest civilizations is viewed as the Third Pole as its glaciers feed the 10 river systems of Asia. It will contribute to the peace and prosperity of over a billion people in Asia who live downstream and depend on Tibet's water for sustenance. A speedy resolution will send the right message and serve as a model for other freedom struggles as the Tibetan struggle is one firmly anchored in non-violence and democracy. Last, but not the least, solving the issue of Tibet could be a catalyst for moderation of China.

We extend our deepest gratitude to the great people and government of India. We are also immensely grateful to all governments, international organizations, Tibet Support Groups and individual supporters across the globe for their supportive resolutions, statements, and for their unflinching and generous support. At the same time, we believe that the moment has come for governments and the international community to take concrete actions to press the Chinese government to enter into meaningful dialogue with the Tibetan leadership.

We call on the international community to press the Chinese government to allow the UN High Commissioner for Human Rights entry into Tibet, and also to give access to diplomats and the international media. Only in this way can the truth about the grave situation in Tibet be unveiled and the self-immolations abated.

The Kashag has announced 2013 as a year of Solidarity With Tibet Campaign. Each of our numerous events are organized peacefully, legally and with dignity. Thousands of Tibetans and Indian friends gathered in New Delhi on January 30 for a 4-day mass campaign organized by the Central Tibetan Administration. Many prominent Indian leaders representing various parties attended and pledged action for Tibet. Tibetans and friends in Europe today are holding The European Solidarity Rally for Tibet in Brussels. This month Tibetans in North America, Europe and elsewhere are organizing Tibet Lobby Days. The core message we request everyone to communicate are the three Ds: Devolution, Democracy and Dialogue.

The character of our people is being shaped by our endurance of the darkest period in Tibet's history. Under the enlightened leadership of His Holiness the great Fourteenth Dalai Lama, we continue to meet adversity with exceptional unity, resilience, and dignity. I fervently pray for the long life of His Holiness the Dalai Lama.

The Kashag is uplifted and deeply gratified by the support and solidarity it has received from Tibetans inside and outside Tibet. With unity, self-reliance and innovation as the guiding principles, we are determined to fulfill the aspirations of all Tibetans to enjoy the freedom and dignity, which we deserve and is our right.

Let me conclude by again paying homage to our brothers and sisters in Tibet.