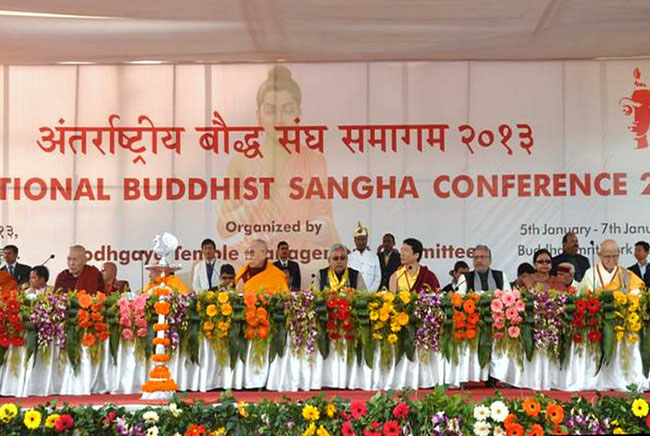 Patna, Bihar: - The spiritual leader of Tibet, His Holiness the 14th Dalai Lama inaugurated the three-day international Buddhist convention at Buddha Smriti Park in the heart of Patna on Saturday. Hundreds of delegates, mostly scholars of Buddhism and monks from across the world, were participated in the conference.

The 3-day International Buddhist conference held in at Buddha Smriti Park of Patna city on Saturday, January 5, in the presence of the spiritual leader of Tibet His Holiness, Hon'ble Chief Minister of Bihar - Shri Nitish Kumar and delegates from 17 countries.

Bodhgaya Temple Management Committee Chairperson, Bandana Preyashi welcomed His Holiness in the early afternoon at the gates of the Buddha Smriti Park and escorted him to the stage where the conference inaugural ceremonies held.

With the lighting of the ceremonial lamp by the spiritual leader of Tibet His Holiness the Dalai Lama and the Chief Minister of Bihar state, with the chant of 'Buddham Sharnam Gachchhami' setting the tenor of the conclave for the three days.

His Holiness the Dalai Lama greeted the delegates, among them several senior and elderly monks from Buddhist countries such as Bangladesh, Bhutan, Myanmar, India, Japan, Laos, Sri Lanka, Tibet, Thailand and Vietnam.

The Buddhist leader praised the Chief Minister's enthusiasm not only for material development, but also for the inner values inherent in Bihar's history and his efforts to transforming a former place of confinement into a symbol of liberation.

"We have now reached the twenty-first century. Time goes on naturally and no one can stop it." he said, "We cannot change the past, but we can plan for the future. In terms of material and spiritual progress, science and technology have focused on material development, which is essential when so many remain materially deprived. However, along with material progress we also need to attend to our inner development," said His Holiness.

"Thinking only of material development makes us insensitive to the problems of others. It gives rise to greed and deceit, which in many places is the reality today. Scientists and thinkers are concluding that one of the main causes of trouble in society is a lack of love and compassion. Therefore, one of our tasks is to raise awareness of the importance of compassion and pay more attention to promoting it. Although this is traditionally one of religion's responsibilities, this is a responsibility we all have to shoulder as individuals. In the context of this conference, he said, we need to examine what contribution Buddhism can make to this.

"Since our religious traditions share a common goal, it is important that we encourage greater understanding and respect among them. I often express my admiration for the way different religious traditions, both indigenous and from abroad, have flourished side by side for centuries in this country. Inter-religious harmony has become an Indian cultural tradition that serves as an example to the rest of the world."

The Nobel peace laureate also expressed satisfaction at the Chief Minister's intention to make the Pataliputra Karuna Stupa a centre of learning. He pointed out that the Tripitaka, the three collections of Buddhist scriptures can be viewed as dealing with Buddhist science, philosophy and spiritual practice. While the spiritual practice sections are a matter for Buddhists, the science and philosophy, such as the explanation of impermanence and momentary change, may be of interest to anyone.

The Buddhist explanation of conventional and ultimate truth is evidence of a scientific approach to reality that can benefit all humanity, His Holiness told the crowd. "The creation of this stupa should not be seen as an opportunity to propagate Buddhism as such. We are not trying to convert others to Buddhism. But when a centre of learning has been established here, Buddhist science and philosophy can be among the subjects for academic study."

In his keynote speech that lasted 30 minutes, Kumar said that Bihar was not only the land of over 11 crore Biharis but also belonged to millions of Buddhists spread across the world.

Bowing to His Holiness the Dalai Lama to seek his blessings, the Chief Minister said that when the Tibetan leader had come to Bihar previously, he had sought his blessings to give him strength to lead Bihar into prosperity. To this, Kumar said, His Holiness the Dalai Lama responded by saying that when Bihar already had the blessings of Buddha, there was no reason why Bihar would remain backward.

Appealing tp the visitors from 17 nations to help Bihar develop the proposed Buddhist circuit and also contribute in the rebuilding of Bihar, the Chief Minister said that the teachings of Lord Buddha were as relevant today as they were thousands of years ago and people would do themselves a favor by adopting the morals in the Buddhist faith.

Kumar said that the government would soon build a stupa in Vaishali, the ancient seat of the Lichchavis where Buddha delivered his last sermon before his death in 483 B.C. Deputy Chief Minister Sushil Kumar Modi and Art and Culture Minister Sukhda Pandey were among others who also spoke on the opening day of the convention.

The Buddhist Conclave highlighted the relevance of Buddhism in today's age more than 2,000 years after the ancient Indian King Ashoka took it upon himself to spread the message of Lord Buddha. During the conference inaugural ceremonies, Ven Tenzin Priyadarshi, Convener of the Conference outlined the three main aims of the meeting:
1. To create a society of ideal persons striving for moral and spiritual perfection;
2. To create a vehicle through which knowledge, wisdom and understanding of how to live a good life could be spread through society from generation to generation;
3. To create a democratically governed society of well-disciplined members.

The convention is being organised by the committee in collaboration with the state art and culture department. The 22-acre Buddha Smriti Park in the heart of Patna was also inaugurated by His Holiness in 2010, chosen as the venue of the convention, since its Karuna stupa enshrines the holy relics of Lord Buddha, brought from Sri Lanka, Japan, Mayanmar, South Korea, Thailand and Tibet.