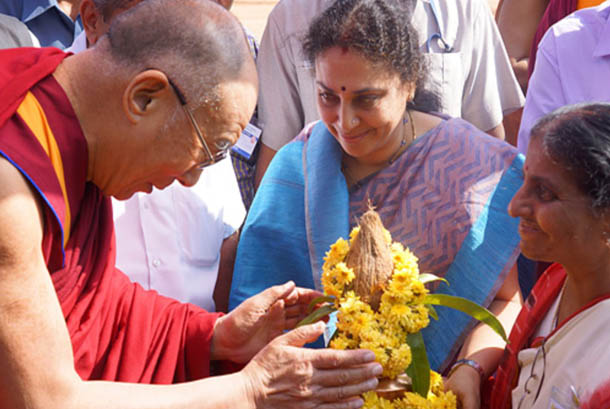 Dharamshala: - The spiritual leader of Tibet His Holiness The Dalai Lama's current tour of south India has seen him speak out on various topics. At the inauguration of the 80th Sivagiri Annual Pilgrimage in Kerala state on November 25, he praised Indian spirituality, noting that Tibet's historical roots are founded in India.

He went on to share his hesitant optimism about recent change China's leadership, saying, "Many Chinese friends have noted that Xi Jinping seems to reveal in his body language that he is more human and more relaxed compared to his predecessors, who were prone to look like statues". He did, however, stress that the Chinese system is difficult to change.

Regarding the escalating spate of self-immolations in Tibet, His Holiness asserted that they are a symptom of problems Tibetans did not create and again appealed to the Chinese authorities to investigate why they are taking place.

"As Deng Xiaoping said, 'Seek truth from facts' and act accordingly," he said. "What's happening is very sad - it brings tears to my eyes. People are not doing this because they are drunk or have family problems, but because they live in constant fear."

On November 26, His Holiness met with Friends of Tibet and spoke on the history of Tibetan medicine. "It's like a medication ensuring peace of mind, " he said. "Sadly, narrow-minded and short-sighted communist officials in Tibet today only consider the power of the gun - they don't even recognize the power of peace of mind."

The conversation turned to His Holiness' position on Tibet's fate in China, on which he said, "The world trend is towards greater democracy, freedom and the rule of law, and even China cannot buck the trend, but must find a more realistic approach. The new leadership would do well to pay attention to China's intellectuals. I hope they will."

His Holiness later attended the centenary celebrations of Malankara Orthodox Syrian Church, at which he spoke in depth about the state of religious harmony and conflict in today's world, and how India is a great example for the world to follow. "India is a living example of how religious traditions can live together in friendship and harmony. Today, in some parts of the world, religion continues to divide people and to lead to conflict, therefore India's example is very relevant here and now."

The tour then took His Holiness to Tumkur University where he spoke about the important relationship between the Buddhist and more broadly spiritual values that can be found and utilized in all aspects of daily life, both religious and secular. Essentially, he explained, Buddhism is about the view of dependent origination and the conduct of non-violence - helping others if you can, but at least avoiding doing them harm.

On November 29, His Holiness spoke at World Compassion Day in Mumbai about the importance of animal welfare. "Now, with regard to animals, they not only have life, but feelings of pleasure and pain too," he said. "We should treat their lives with respect, which we Tibetans are accustomed to do."

He concluded his speech with the plea that all people show kindness and respect to all sentient beings.