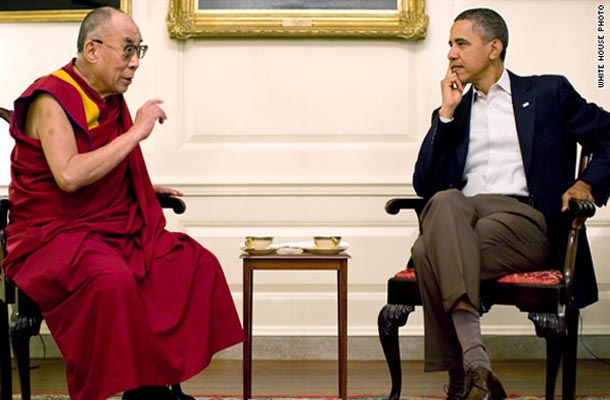 Dharamshala: - The spiritual leader of Tibet, His Holiness the 14th Dalai Lama Wednesday, 7 October, congratulated Mr Barack Obama on his re-election for second term as US president and hoped his administration would take steps to find an effective and long-lasting solution to the increasing and tragic wave of self-immolations in Tibet.

"Please accept my congratulations on your re-election to the presidency of the United States.
When you were elected in 2008, you inspired the world with a call to take responsibility for the problems we face as global citizens," the spiriutal leader of Tibet, His Holiness the Dalai Lama stated in his congratulatory message to US President Barack Obama.

The Nobel Peace laureate wrote to Obama, saying "since then, you have made earnest efforts to live up to that great hope and trust placed in you by the American public. I believe you have been re-elected now in recognition of that effort."

"When you first took office, I remember writing to you that the world places great hope in the democratic vision and leadership of the United States and that I hoped you would be able to shape a more peaceful world, bearing in mind the poverty, injustice and deprivation suffered by billions of people. The need to address these issues remains pressing today, His Holiness said.

"As you know, it is over a year since I handed over all my political authority to the elected Tibetan leadership, but as just one among the six million Tibetans I want to thank you for your steady encouragement of our efforts to find a peaceful resolution to the problems in Tibet," he added.

His Holiness in a message, said: "I am very appreciative of your support for our Middle Way Approach, which I continue to believe is the best way for us to ensure a solution that is beneficial for both Tibetans and Chinese."

"Given the recently deteriorating situation in Tibet, of which the tragic series of self-immolations is a stark symptom, I hope your Administration will be able to take further steps to encourage a mutually acceptable solution," His Holines added.

The office of His Holines Dalai Lama told IANS that since George HW Bush (1991), His Holiness has met all the US presidents, including Barack Obama twice - February 2010 and July 2011. He met Bill Clinton and George W Bush several times.

Democratic presidential candidate Obama has won at least 303 electoral votes to 206 for Republican presidential candidate Mitt Romney. Obama also squeaked out a popular vote victory, picking up 50 percent to Romney's 48 percent. The president's vote total so far was 59,971,062, while Romney received 57,304,301 votes, according to reports on Wednesday.