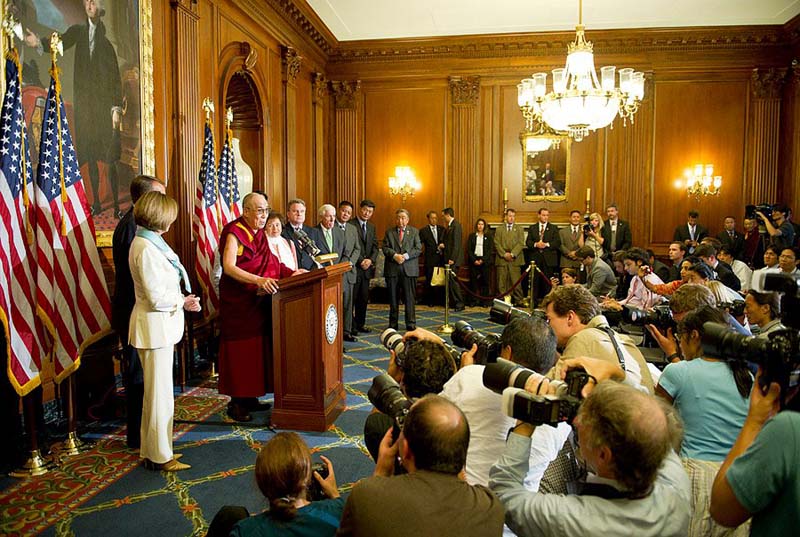 Washington, DC:  - The US House of Representatives passed a resolution on 6 July welcoming His Holiness the Dalai Lama to Washington, DC, and recognising his commitment to world peace and a mutually beneficial solution to the issue of Tibet through dialogue with the Chinese Government.

The resolution, which was introduced by Delegate Eleanor Norton, "appreciates the Dalai Lama for promoting individual and world peace, which is the underlying message of the Kalachakra teachings."

The resolution "commends His Holiness the Dalai Lama for his perseverance in striving for a nonviolent solution for Tibet that provides for the religious and cultural autonomy for the Tibetan people, and for seeking a durable and mutually beneficial resolution to the Tibet issue through dialogue with the Chinese Government."

It "extols the maturation of democracy within the Tibetan exile community and the Dalai Lama's efforts to encourage democratic self-governance for Tibetans, Chinese, and others who are denied their basic human rights within the People's Republic of China."

Speaking to the media after the meeting with His Holiness the Dalai Lama, Nancy Pelosi said: "Thank you very much, Mr. Speaker. I want to pick up where you left off with that - His Holiness being a source of understanding in bringing the two parties in the House of Representatives together. For decades, really, Mr. Wolf, Chairman Wolf, Chairman Smith, Chairwoman Ros-Lehtinen, Chairwoman Lowey, now Ranking Member Lowey, and Mr. Berman who was with us earlier, have worked together to understand better and help the Tibetan people.

"I'm very proud of the fact that we have come together under the dome of the Capitol a number of times to honor His Holiness. President Bush, President George Walker Bush, in 2007 was present to present to His Holiness the Congressional Gold Medal. At that time, he did so honouring the commitment of His Holiness to peace, to nonviolence, to human rights, and to religious understanding. A couple of years later, President Obama welcomed the Dalai Lama to the White House, and we were honored by that. But his association with our country and our presidents goes way back, when he was a very little boy and first became the Dalai Lama, President Franklin Roosevelt sent him a watch, recognising his love, even as a little boy, for science and technology; it was a watch that had a phases of the moon on it. And it is always a source of great pride to us that this relationship between our two countries and leaders goes back so far.

"So it is with great admiration, even I would say affection, and really great historic honor to join our distinguished Speaker, our colleagues in a bipartisan way, to welcome His Holiness once again to the Capitol of the United States," Pelosi said.

In her statement, US Representative Ileana Ros-Lehtinen (R-FL), Chairman of the House Foreign Affairs Committee, called on the US and other responsible nations to urge Beijing to end its brutal policies against the people of China and Tibet.

"The current crackdown taking place in China and throughout Tibet is more of the same brutality from Beijing. Additionally, Beijing is implementing new policies to wipe out the Tibetan culture, such as facilitating the immigration of Han Chinese into Tibet and forcing Tibetan herders to leave the plateau and resettle in concrete block apartments," Ros-Lehtinen said.

During a recent Committee hearing examining the status of religious freedom, democracy, and human rights in Asia, Chairman Ros-Lehtinen urged President Obama to meet with His Holiness the Dalai Lama during the Dalai Lama's current visit.