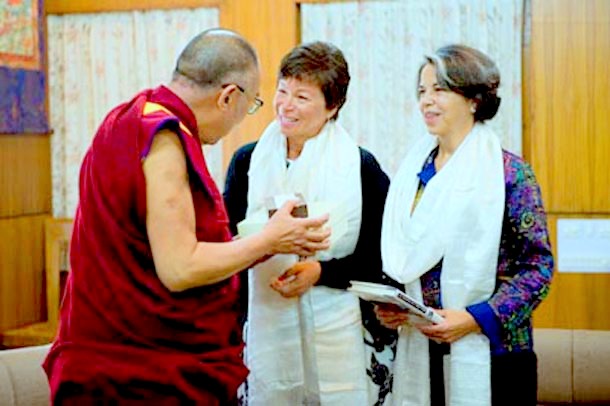 Dharamshala: - The spiritual leader of Tibet, His Holiness the Dalai Lama met with a top US State Department official in capital Washington DC on Tuesday, July 5. His Holiness, who celebrated his 76th birthday yesterday, is in the US to offer an 10-day Kalachakra initiation.

Under Secretary of State for Democracy and Global Affairs Maria Otero expressed US support for Tibet, speaking with His Holiness about the importance of preserving Tibet's cultural identity and protecting human rights in Chinese-governed Tibet. She "commended the Dalai Lama for his commitment to peace and nonviolence and the pursuit of dialogue with the Chinese government," according to a statement by the US State Department.

At the invitation of Speaker of the House John Boehner, His Holiness the Dalai Lama will meet with congressional leaders including House Minority Leader Nancy Pelosi at Capitol Hill on Thursday.

It remains unclear whether His Holiness will meet with President Barack Obama during his time in the US. A meeting between the two would anger China, who sees His Holiness as a "separatist" who wants Tibet to split with China. His Holiness has countered separatist accusations, stating that he only wants to protect the basic human rights and cultural identity of the Tibetan people.

Obama has met with His Holiness once before, in February 2011. This meeting was not received well by the Chinese government, who viewed the meeting as a symbol of US support for an independent Tibet. After that meeting, a spokesman for the Chinese Foreign Ministry demanded that the US "stop conniving and supporting anti-Chinese separatist forces," and stated that their meeting "grossly violated the norms governing...international relations."

China has made its stance clear regarding meetings between the Dalai Lama and US government officials. Chinese foreign ministry spokesman Hong Lei told the press today that "we are firmly against the Dalai Lama engaging in activities aimed at splitting the motherland through overseas visits...we oppose any foreign government or politicians supporting or abbeting in such activities by the Dalai Lama."

Hong said China hopes that "the United States strictly abide by its promises on the Tibet issue and ... cautiously and appropriately deal with relevant issues."

Members of the House Foreign Affairs Committee have urged the president to meet with the Dalai Lama despite Chinese opposition. The committee, chaired by Republican Ileana Ros-Lehtinen, expressed the opinion that the Obama administration should "pay the proper respect that this leader deserves."