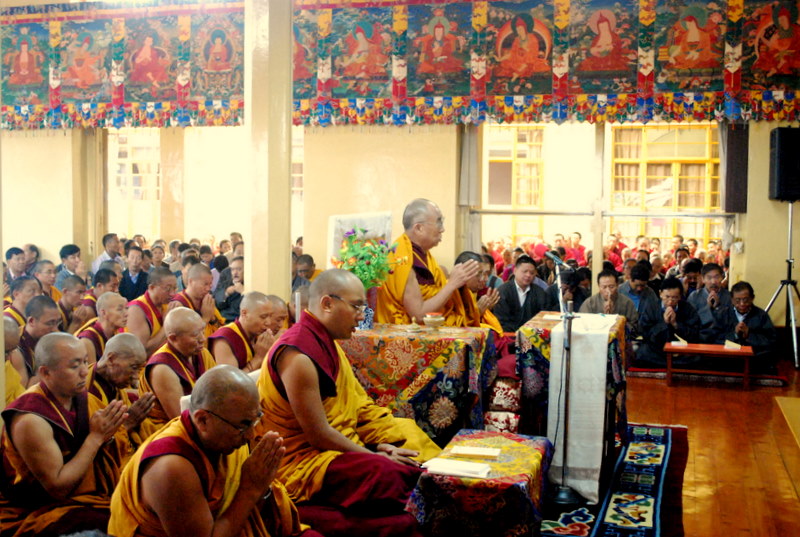 Dharamshala: His Holiness the 14th Dalai Lama this morning led a mass prayer service for victims of the recent floods in Drugchu County, eastern Tibet. The ceremony, held at the main Tibetan temple in Dharamshala, began at 0730 and lasted over three hours. It was attended by the 17th Gyalwa Karmapa Rinpoche along with hundreds of Tibetan exiles, Buddhist monks and nuns, and non-Tibetans.

His Holiness said global warming could be to blame for the devastating floods and mudslides across Asia, and made the following statement:

"I have been deeply saddened by the loss of many lives and the destruction of property caused by the floods in Pakistan and  India. I have offered my condolences and prayers as well as token donations towards relief and rescue work.

"Pakistan officials say 14 to 20 million people face direct or indirect harm as a result of unprecedented flooding that has triggered the country's worst humanitarian disaster. The United Nations believes 1,600 people have died, while Islamabad has confirmed over 1,300 deaths.

"I am also very sad that there has been a massive landslide in Drugchu [Chinese name Zhouqu], south-east of Kanlho [Chinese name Gannan], in Gansu province of the Tibetan Autonomous Prefecture, in which many people have lost their lives. It is reported that this is one of the deadliest incidents in decades. I understand that Premier Wen Jiabao visited Zhouqu to oversee relief and rescue work.

"Meanwhile, Tibet's massive mudslide has killed over 1,150 people and hundreds are still missing. China claims that Drugchu has a population of 134,000 and at least 45,000 people have evacuated their homes.

"A concerted international effort is needed to think about measures to preserve our common and delicate ecology.

"According to experts, these very unusual floods and the devastating fires in Russia [which have burned 2,000 homes and killed 52 people] are symptoms of a deeper malaise occurring due to unprecedented global warming and other environmental causes."