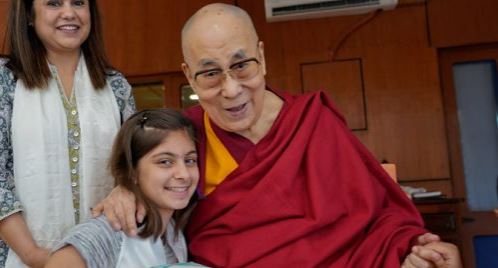 His Holiness the Dalai Lama speaking to a young girl at his residence in Dharamshala, HP, India on June 10, 2019. Photo: OHHDL

Dharamshala, India — His Holiness the Dalai Lama explains the importance of warm-heartedness and intelligence in answer to a question from a young girl at his residence in Dharamsala, HP, India on June 10, 2019.

The young girl and her family were given an opportunity to have a private audience with His Holiness the Dalai Lama at his residence in Dharamshala, India, where the young and energetic girl asked: If you could give one message to the children in America what would it be?

The spiritual leader of Tibet responded clearly: "Cultivate a combination of a sharp brain and warm-heartedness. Just a sharp brain is no guarantee you will be a happy person."

"So, combined with warm-heartedness, this intelligent can become more positive, constructive. That is important," the Tibetan leader told the young girl listening carefully to his message to the children in America.

"Like the Nalanda Master, their brains were something very unusual and they utilised their brains in a maximum way, not just through faith," His Holiness said, adding: "But, in the meantime, moral principles were there. So their sharp brains became constructive."

is Holiness, the 14th Dalai Lama is the spiritual leader of Tibet and its people and their greatest advocate for a free Tibet. Over past six decades hee traveled all over the world spreading his message of peace, non-violence, and compassionate responsibility for his fellow man.