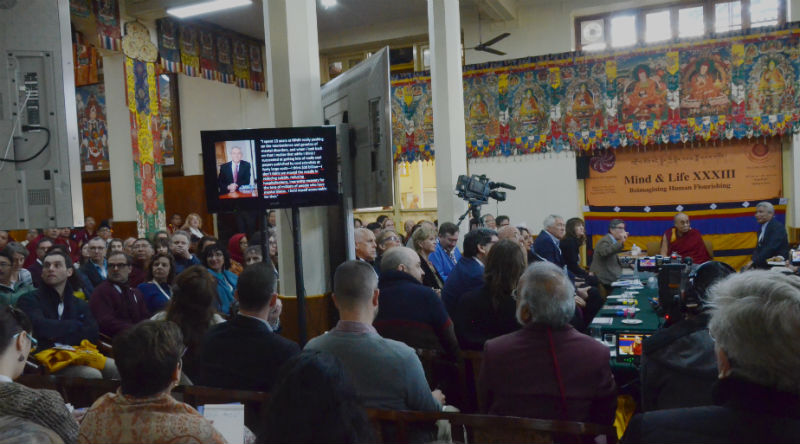 "From March 12-16, His Holiness the 14th Dalai Lama will engage in an in-depth dialogue with leading scientists, humanities scholars, education researchers, and practitioners on the topic of education and how to best prepare young people for their roles in a rapidly-changing world," said the Mind & Life Institute who is sponsoring the five-day event in the hill-town.

In his opening remarks, His Holiness the Dalai Lama spoke of his two main purposes for dialogue with the leading scientists and education experts. The first purpose, he said, is to expand knowledge; second, to help promote inner values of love, compassion, forgiveness through scientific understanding and secular way.

His Holiness told the participants that human sufferings and emotional crisis are ever growing despite of high advancement in science and technology. “This very moment, when we are enjoying peace and comfort, another place on the same planet, same human beings in Syria, Yemen and African states are being killed. That is today’s world. We cannot ignore this thing. We can’t be indifferent. We cannot solve these problems immediately but if we make effort now, I think later part of the 21st century can be a little better”.

“Now, more than ever, we need sense of concern for other’s wellbeing, compassion on the basis of the sense of oneness of 7 billion human being. A universal framework of moral ethics that include both believers and non-believers,” His Holiness said.

The Tibetan spiritual leader reiterated his secular stance to dealing with human problems. “We need to cultivate inner values through scientific understanding and secular framework. Science should be able to promote qualities like warmheartedness and compassion as a matter of physical and emotional health”.

Holding hands of his long-time friend and neuroscientist, Dr Richard Davidson, His Holiness affirmed his commitment to serve humanity as long as human suffering remained. “So long as space remains, so long as sentient beings remain, May I too remain, to dispel the sufferings of the world,” His Holiness said his prayers.

Dr Richard Davidson, Neuroscientist, Professor at University of Madison, in his presentation, said that Mind & Life Dialogue were deeply enriched and pioneered by the conversations raised by His Holiness the Dalai Lama since late 1980s; on secular education, applying scientific wisdom to modern day issues and exploring contemplative traditions to cultivate virtuous qualities of the mind as an antidote to destructive emotions.

New models for integrating the teaching of compassion and ethics in schools will be explored, along with developing students’ social and emotional skills through focused attention and mindfulness training. The dialogue will take place at the Tsuglagkhang, the main temple in Dharamshala, India. Organiser said: "More than 150 invited guests will be in attendance, with the proceedings livestreamed to a broad international audience."

“In the face of sweeping changes in today’s world, it’s critical that young people develop the skills to be active citizens and bridge builders,” said Mind and Life President Susan Bauer-Wu, PhD. “Building on the tremendous strides made in the area of social and emotional learning over the past decade, we seek to explore holistic educational models aimed at nurturing compassion and ethical understanding among students, parents, and educators."