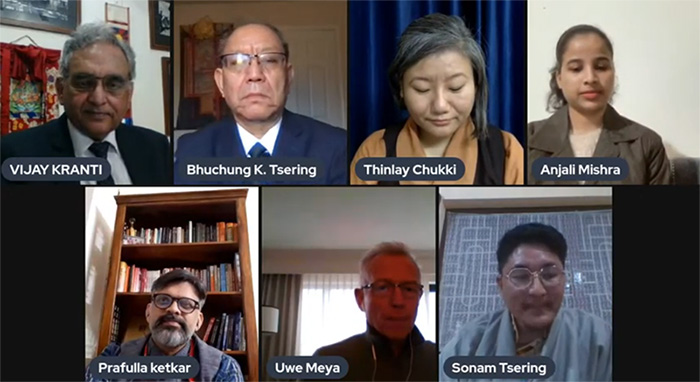 New Delhi, India — In a world where most rulers and powerful people are known more for taking away the rights of their people on one or the other pretext, His Holiness the Dalai Lama of Tibet has emerged as a unique leader who has presented the example of how the leaders can strengthen the people and themselves by giving up and sharing their own powers with the people they lead and govern.

In an international webinar on the subject “A DEMOCRAT DALAI LAMA”, held to commemorate the 32nd anniversary of Nobel Peace Prize to the Dalai Lama and the International Human Rights Day, the experts traced the evolution of the Dalai Lama from the theocratic ruler of Tibet to the most popular champion of democracy in present day world. By leading the Tibetan people through a genuine democratic system and presenting his idea of universal responsibility he has presented a good example to the dictatorial leaders and regimes of the world to communicate that sharing power and authority with their subjects is a bigger guarantee to their popularity and stability.

This webinar was jointly organized by the Centre for Himalayan Asia Studies and Engagement (CHASE) and the Tibetan Youth Congress (TYC) from New Delhi. The three main experts who made their presentations on this subject are Mr Bhuchung K. Tsering, the Interim President of International Campaign for Tibet from Washington (DC) USA; Dr Uwe Meya, Board Member of GSTE a prominent Tibet support group in Switzerland and a Tibet explorer; and Ms Thinley Chukki a leading Tibetan legal practitioner who is a Harvard Law Graduate and former Special Appointee for Human Rights of Tibet Bureau Geneva. The webinar was moderated by Vijay Kranti, a senior journalist, Tibetologist and Chairman of CHASE.

Mr Bhuchung K. Tsering pointed out that deep understanding of the Buddhist concepts and his experience in dealing with the communist regime of China during the post-1950 period has helped HH the Dalai Lama to understand the importance of democracy. His interaction with Indian leaders after his exile to India in 1959 and subsequent wide travels across the world and meetings with world leaders has strengthened his faith in the efficacy of democracy. “His perception of democracy has a moral dimension to it as it is centred on universal principles.

In a world where politicians are not looked upon with great enthusiasm, he advocates that if governed with transparency and universal values, people will have more trust in the leaders and their administration. Only then a healthy and better form of democracy can prevail”, he said. “Dalai Lama has also laid down a need for a positive mental attitude for leaders in democratic governance. While no system of governance is perfect, according to Dalai Lama, democratic governance is still the closest one to human nature and human liking”, he added.

Commenting on China, especially their conduct in occupied Tibet, Bhuchung said that Chinese leaders claim their communist system as a ‘democratic’ one. But in fact what we see in China and its colonized countries like Tibet, is their rule through extensive monitoring, censorship and various types of controls over the public. Instead of leading the society, they seek to manage the masses, he said.

Dr Uwe Meya has traveled extensively inside Tibet and was a firsthand witnessed to the 1988 uprising in Lhasa. He is closely associated with the Tibetan communities in Germany and Switzerland. He shared his experience of how the Dalai Lama’s democratic values have percolated deep into the exile Tibetan society and have strengthened it and its freedom struggle. He gave an example of how Tibetans living in Switzerland have organized themselves into a well-knit democratic society which functions through many democratically elected local councils. He regretted that the world today knows about Tibet either through travel agencies who present today’s Tibet as a ‘spiritual’ destination which it is no more under the Chinese communist rule. Or, the world learns about Tibet through the Chinese propaganda which is trying to paint the Tibetan freedom movement as just an attempt of Dalai Lama to reestablish the old feudal system in Tibet.

He told the audience that many organizations in Switzerland and other parts of Europe are actively engaged in educating people about the real situation in Tibet and local Tibetans are playing an active role in the regional and national political systems of their host countries.

Ms Thinley Chukki is a third-generation Tibetan refugee and a leading legal figure among the Tibetan Diaspora. She joined the discussion by explaining that HH Dalai Lama not only established the foundation of democracy for Tibet and its people but has also made a great contribution towards spreading these values to the rest of the world.

His message of non-violence, love, compassion, and universal responsibility has won world attention and support. By giving up his own political powers to the Tibetan people he has presented the example of how a leader can strengthen society by giving up one’s own powers and privileges.

Referring the Dalai Lama as a ‘monk statesman’ Vijay Kranti said that by handing over his own political powers to the elected representatives of Tibetan people he has given an infinite life span – beyond his personal life span - to the Tibetan people’s struggle for liberation of Tibet from Chinese colonial rule. With this remarkable democratic stroke he has out maneuvered the Chinese communist leaders, especially President Xi Jinping, who was hoping to solve their ‘Tibetan problem’ by appointing a puppet Dalai Lama in Tibet after the life span of preset Dalai Lama ends. Through this step, the Dalai Lama has ensured that the Tibetan struggle and Tibetan spirit would survive till the day when the communist system of China breaks down as it did in the erstwhile USSR, and Tibet will regain its independence as did the 16 countries occupied by the communist regime of USSR.

Mr Prafulla Ketkar, a well-known expert on international affairs, editor of ‘Organiser’ news weekly, and a senior Indian journalist, said in his concluding remarks that the spirit of democracy in Tibet which binds the spiritual strength, people’s power and political stability through a decentralized approach is a great example for the world community to learn from. Dalai Lama’s model of gaining strength and people’s respect through giving up power to the people is more valuable and useful for the dictatorial regimes, as one in China, to learn before it is too late for them, he added.

Mr Sonam Tsering, General Secretary of TYC and co-host of the webinar, presented a vote of thanks. TYC is the largest and most influential socio-political organization among the Tibetan Diaspora. It has functioned as the nursery of Tibet’s leadership for three generations since its inception.