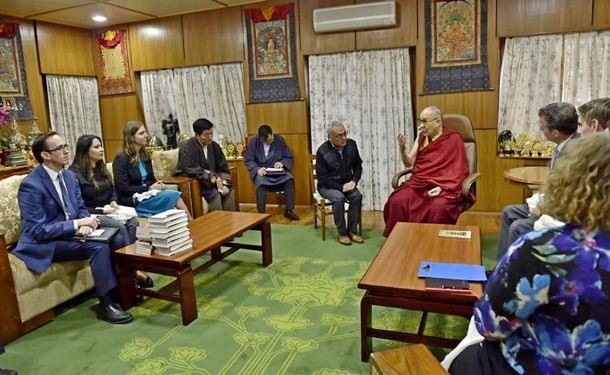 His Holiness the Dalai Lama speaking to the U.S delegation led by Ambassador Sam Brownback of U.S Ambassador at large for Religious Freedom, in Dharamshala, India, on Monday, October 28, 2019. Photo: OOHHDL

Dharamshala, India — Amidst growing calls for an end to China's interference in the Buddhist reincarnation system of Tibet, a top U.S. diplomat met His Holiness the Dalai Lama in a bid to send a strong message to China that the role of picking a successor to the Dalai Lama does not belong to anybody else, but the Tibetan Buddhist system alone.

A delegation from the U.S consisting of U.S Ambassador at large for Religious Freedom led by Samuel D. Brownback and his entourage met with Holiness the Dalai Lama, in Dharamshala, India, on Monday, October 28, 2019. Sam Brownback said that right to the reincarnation of His Holiness the Dalai Lama belongs to people of Tibet and Tibetan Buddhist System.’

Brownback also discussed with the 84-year-old Nobel Peace Lureate ways to improve religious freedom for Tibetan Buddhists around the world. "Inspired and deeply moved after my meeting with His Holiness @DalaiLama in India. He is living testament of the power of religious freedom to overcome hate, division, and intolerance. I'm stirred in my own faith to work harder for religious freedom for all, including Tibetans," the top U.S. Diplomat said in a tweet.

"Reminded today of the rich history of the Tibetans. They are a beacon of hope for religious freedom for all. They have not only endured but defied attacks by those who sought to revise, restrict, and erase their unique heritage. Today we stand in honour and celebration of them," he said in another tweet.

During the two-day visit, which began on Sunday, the Ambassador also met high-ranking officials of the Tibetan government in-Exile, officially known as the Central Tibetan Administration (CTA), including President Dr Lobsang Sangay who is the democratically elected leader of the Tibetan people.

The delegation led by Samuel D. Brownback arrived in Dharamshala on Sunday at the special invitation of CTA President Dr Lobsang Sangay to be the official chief guest for the First International Conference on Tibetan Performing Arts and the 60th-anniversary celebrations of Tibetan Institute of Performing Arts (TIPA).

The Ambassador also met with a group of survivors of religious persecution who had recently escaped from Chinese-controlled Tibet and had an hour-long interaction with them while they narrated their accounts.

Speaking on the meeting he said, “We believe in religious freedom; the United States strongly supports religious freedom. We believe people all over the world deserve this right and they should be able to practice theirs peacefully and freely."

After the hour-long session with His Holiness the Dalai Lama, the delegation left to attend the event at TIPA. The visit of the US Ambassador at large for International Religious Freedom at the seat of the CTA is the highest-level official visit led by the US Government to the CTA in the recent period.

The Office of International Religious Freedom in the U.S. Department of State said it has the mission of promoting religious freedom as a core objective of U.S. foreign policy and monitors religious persecution and discrimination worldwide, recommend and implement policies in respective regions or countries, and develop programs to promote religious freedom.

Donald Trump last month became the first US President to convene a meeting at the United Nations on religious freedom. He kicked off the U.N. General Assembly’s annual session with a “Global Call to Protect Religious Freedom.”

Flanked by Secretary-General António Guterres and Vice President Mike Pence, the president declared: “No right is more fundamental to a peaceful, prosperous, flourishing society than religious freedom, yet it is rare around the world. As we speak, many people of faith are being jailed, murdered, often at the hands of their own government.” More than 80% of the world’s population lived in nations that restrict religious freedom as of 2009, and the situation hasn’t improved, according to Pew Research.

President Trump’s call to action was the culmination of a series of advances on international religious freedom over the past two years. U.S. officials at the U.N. have repeatedly issued statements indicating that religious freedom is America’s top human-rights priority. In July the State Department hosted its second annual Ministerial to Advance Religious Freedom in Washington. Officials from more than 100 countries and more than 1,000 civil-society leaders gathered to discuss the subject.

At the U.N., Trump also announced that the U.S. is committing $25 million to religious-freedom efforts and launching a coalition of businesses for religious freedom. A few weeks ago the administration launched the International Religious Freedom Alliance, the first international body devoted to advancing religious freedom. The alliance is intended to “build on efforts to date and bring like-minded countries together to confront challenges of international religious freedom,” Secretary of State Mike Pompeo said in his keynote address at the July ministerial.

The President has now made clear that the U.S. intends to engage the U.N. system where it has the potential to make a positive impact on those suffering human rights abuses, particularly abuses of the right to freedom of religion. As the president said, it’s an issue of “urgent moral duty” for all nations.