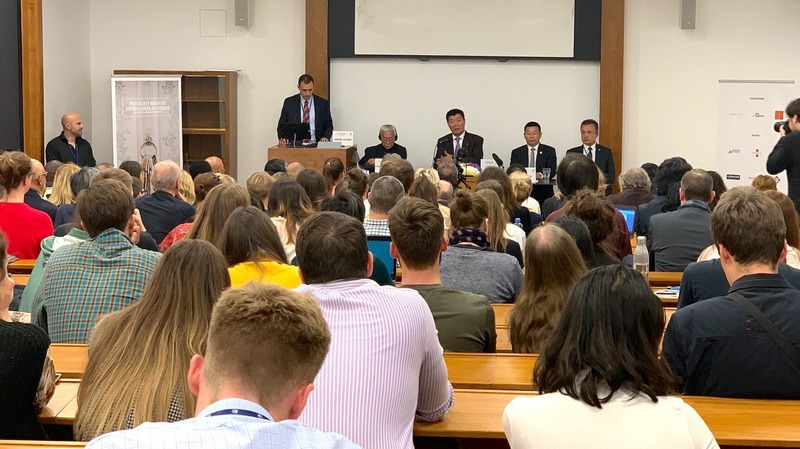 Prague —'Unlike the Vatican, Tibetans never agreed or accepted the Order no. 5 and strongly believe that the Chinese atheist government has no say in the reincarnations system of Tibetan Buddhism,' President of the Tibetan-government-in-exile, Dr Lobsang Sangay said while speaking to a panel of prominent activists and critics of China to discuss human rights in China.

The Sikyong (President) of the Tibetan-government-in-exile, officially known as the Central Tibetan Administration (CTA) Dr. Lobsang Sangay joined with a panel of prominent activists and critics of China to discuss human rights in China in the 21st-century digital surveillance at Charles University, Prague Tuesday, according to the Sikyong Office.

Part of the Forum 2000 conference, the panelists along with the Tibetan President Dr Sangay included prominent activists such as Dolkun Isa, President of the World Uyghur Congress, Yang Jianli, President of Initiatives for China, and Cardinal Joseph Zen, former Bishop of Hong Kong.

President Dr Sangay expressed that China has been recycling its tactics in Tibet in areas outside Tibet such as East Turkistan (Ch: Xinjiang), Hong Kong and around the world.

The President also highlighted the events in Hong Kong and how China violated provisions of its own agreement of 1997 with Hong Kong just as it violated the forcefully imposed 17-point Agreement of 1951.

The President also underlined the agreement signed between the Vatican City and China on the appointment of Bishop last year. He said a similar decree was imposed upon the Tibetan Buddhist Lamas through Order no. 5, a law passed in 2007 to govern the reincarnations. However, the President strongly pointed out that, unlike the Vatican, Tibetans never agreed or accepted the Order no. 5 and strongly believe that the Chinese atheist government has no say in the reincarnations system of Tibetan Buddhism.

The President echoing the concerns of the panelists emphasized China’s acrimonious campaign of subverting its critics and attempts at redefining Human Rights with its own Chinese characteristics at the UN. He called for a coordinated approach, coalition, and collaborative efforts to confront the advancing threat from China.

Earlier that day, Dr Sangay also took part in a Panel discussing His Holiness the Dalai Lama’s historic visit to Czechoslovakia, now the Czech Republic, in 1990, His Holiness’ friendship with former Czech President Vaclav Havel and its consequences.

The President spoke about the grave situation in Tibet and expressed how China’s disregard for human rights and freedom will have implications beyond the internal repression. He also pointed out how the European Union is being divided on values that are at the core of its foundation because of China’s misuse of its economic influence and attempt to bend the global economy to its will.

At the conclusion of the event, a video message from His Holiness the Dalai Lama was screened in which His Holiness called upon the citizen of Czech to “carry on late Havel’s principle.”

Tibetan President is currently on a four-nation tour of Europe, including the Czech Republic, Belgium, Germany, and France during a two-week-long trip starting from October 11, 2019. He will return to Dharamshala on October 23, 2019.