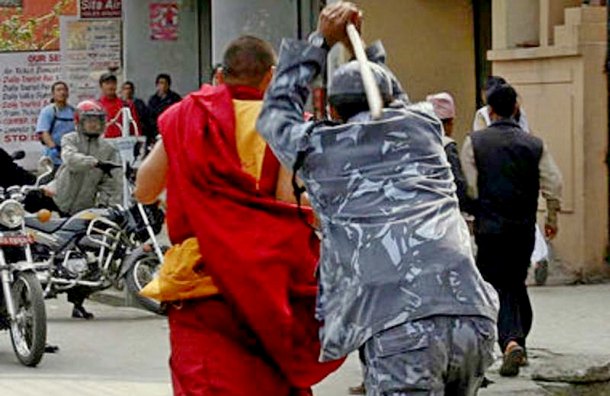 A Nepalese policeman torturing a Tibetan monk during a peaceful protest in Nepal, many say that Nepal is just a puppet of the PRC. Photo: File

The government of Nepal banned a public celebration of the Dalai Lama’s birthday in Kathmandu on July 6, further undermining the human rights and civil liberties of both Tibetans and Nepalese citizens who revere the Dalai Lama as their spiritual master.

Celebrations on the 6th of July 2019 for the 84th birthday of His Holiness the Dalai Lama, have been banned for Tibetans living in Nepal, this comes just few weeks after the US criticised Nepal authorities for their treatment of Tibetan refugees in the country. In addition to preventing the celebration, Nepalese police gathered in riot gear at the Boudha stupa to block any gatherings of Tibetans at the Buddhist pilgrimage site on that day.

Matteo Mecacci, president of the International Campaign for Tibet, said: “The Dalai Lama is revered in Nepal not just by Tibetans, but also by Nepalese Buddhists. While his supporters across the free world publicly celebrated his 84th birthday over the weekend, it was notable that Nepal was the only country besides China that prevented such celebrations. The Nepalese and the Tibetan people enjoy a centuries-old shared religious and cultural heritage in the land where the Buddha was born, and this action by the Nepalese government affects not only Tibetans’ civil liberties, but those of the entire Nepalese Buddhist community”.

Footage of riot police at the Boudha stupa on the Dalai Lama’s birthday on July 6 combined with the prevention of a formal celebratory event by the community showed the impact of Nepal’s compliance with China’s agenda and demands with regard to Tibetans—particularly evident since the Nepalese government signed up to China’s global infrastructure project the Belt and Road Initiative in 2017.

It is a notable step back from previous years, including last year, when the birthday celebration was not only permitted, but also attended by the ambassadors of the USA and France, as well as senior officers from the UK, Japan, Germany, Switzerland, the European Union and the office of the United Nations High Commissioner for Refugees.

The Tibetan Refugee Welfare Office, which oversees Tibetan affairs in Nepal, issued a statement this weekend stating that the birthday event in Nepal’s capital had been canceled by the local organizers after receiving strict orders against it from the Nepalese government. In recent years, the Nepalese government has varied in giving permission for such Tibetan community events, and Tibetans have adapted accordingly by hosting only low-key events in areas outside the Boudha stupa, for instance.

In a further example of intensified pressure on the Tibetan community, Krishna Bahadur Katuwal, assistant district administrator of Kathmandu, was quoted by Reuters saying that the government refused permission for Tibetans to mark the Dalai Lama’s birthday because “infiltrators” could create trouble. Wang Yang, a member of the Chinese Communist Party Standing Committee who has been prominently involved in maintaining high-level ties with Nepal following a visit to Kathmandu in 2017, has spoken recently about the need for Tibetans to defend against “infiltration of foreign hostile forces,” a reference to the Dalai Lama and the Tibetan exile diaspora.

Diplomats from the US, Germany and UK had reportedly planned to attend the birthday celebration in Kathmandu, with an unnamed diplomat quoted by The Himalayan Times on July 7 as saying: “These diplomats have expressed serious concerns about the forced cancellation of the event, which is a severe violation of the rights of people of the Tibetan community.”

The atmosphere in the Tibetan community was tense over the weekend, with many choosing to stay at home rather than be at risk as security was intensified in locations where Tibetans live in Kathmandu, particularly around the Boudha Stupa, Swayambhunath, and Jawalakhel.

Last month, apparently at the request of the Chinese authorities, airport immigration authorities in Kathmandu refused to admit a US citizen of Tibetan origin and deported him. The Tibetan had the same name as Penpa Tsering, the former speaker of the Tibetan parliament-in-exile in Dharamsala. According to the Tibet Sun, immigration officials said that the Chinese Embassy had written to Nepal’s Ministry of Foreign Affairs to restrict a person named ‘Penpa Tsering’ from entering the country, “labeling him a campaigner of the Free Tibet movement, as well as a strong advocate of Tibet’s exiled spiritual leader the Dalai Lama. The officials were unsure whether the same person was the one black-listed by China or not. But wanting to be on the safe side they deported him to the US via Doha.”

A visit to Nepal by then-Chinese Vice Premier Wang Yang in August 2017—the highest-level Chinese visit to Kathmandu since Premier Wen Jiaobao visited in 2012—further strengthened economic and political ties with the new Kathmandu government. Wang Yang, now a Politburo member with broad responsibility for religion in his role as head of the Chinese People’s Political Consultative Conference, the government’s top political advisory body, has consistently emphasized tightening controls over Tibetan Buddhism and has been a central figure in the systematic political campaign against religious practitioners in Tibet.

Combined with an agreement between Nepal and China to ensure cooperation in border law enforcement, and Nepal formally joining China’s Belt and Road Initiative, the developments point to a contracting space and dangers for Tibetans in Nepal as Nepalese authorities deepen their relationship with their more powerful neighbor. The direct correlation between the deepening investment and aid from China and the vulnerabilities of Tibetans in Nepal was acknowledged openly by Beijing when it described its investment as a reward to Nepal for its “important role in guarding against Tibetan separatists” according to Chinese state media.[7] There has been a dramatic decline in Tibetan refugee arrivals and continued inaction on the status of Tibetan refugees. Thousands of Tibetans remain stateless and in political limbo in Nepal.