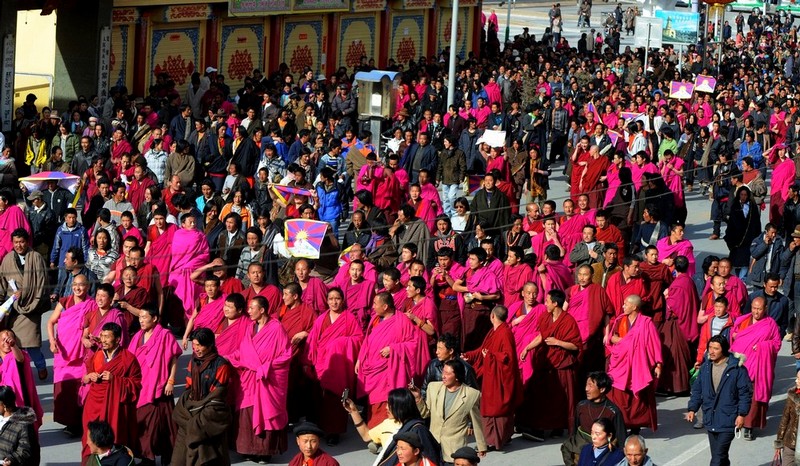 Dharamshala, India — In what is seen as a "systematic" attempt to whitewash the grave human rights situation and the tragic reality in the last 60 years of illegal occupation of Tibet, China issued a new white paper on Tibet titled “Democratic Reform in Tibet: Sixty Years On,” said the Department of Information & International Relations (DIIR) of the Central Tibetan Administration (CTA).

This is according to a report by UN, EU and Human Rights Desk, DIIR, CTA issued on March 28, 2019. Similar to earlier white papers, the DIIR report says this white paper too claims about all the great things that the Communist Party of China has done for the Tibetans and its achievements in the so-called “Tibet Autonomous Tibet” (TAR) in the last 60 years of China’s illegal occupation of Tibet.

China’s State Council Information Office released the white paper just a day ahead of the “Serfs Emancipation Day,” a holiday adopted in 2009, the same year that Tibetan self-immolation protests started in Tibet and just a year after the mass uprisings in Tibet. The white paper claims that in the 60 years after “liberating” Tibetans from “feudal serfdom,” Tibetans in TAR “have become masters of their own affairs” enjoying great ecological and infrastructural progress, and with “the freedom of religious belief of all ethnic groups […] equally respected and protected”.

The UN, EU and Human Rights Desk strongly responded to Communist Chinese totalitarian regime's new white paper on Tibet by saying that "If the situation was so good, then Tibetans would not have continued their peaceful protests against the oppressive Chinese rule forcing them to take dire measures of self-immolation."

"Since 2009 there have been 153 self-immolations reported in different parts of Tibet predominantly calling for freedom for Tibetans and the return of His Holiness the Dalai Lama to Tibet. Sikyong Dr Lobsang Sangay, the President of the Central Tibetan Administration (CTA) in India, has frequently pointed out that Tibetans have set themselves on fire to protest against the Chinese policies of political repression, cultural assimilation, economic marginalization, and environmental destruction.

"Additionally, concerns raised by independent human rights experts in the free world and highlighted in various international reports contradict the claims made by China in the white paper", says the DIIR UN, EU and Human Rights Desk. The main activities of this Desk including monitoring and reporting human rights situation in Tibet;- To provide information and materials related to human rights in Tibet to the UN and related organisations, rights groups, governments, parliaments and individuals.

"For instance, the Freedom House in its Freedom in the World 2019 report has once again ranked Tibet as the least free region in the world with no freedoms, political rights, and civil liberties," it said, adding: "On the much chest thumping pompous claim of China on economic development in Tibet, the Freedom House reports, “the Chinese government’s economic development programs in Tibet have strongly encouraged ethnic Chinese migration to the region, disproportionately benefited ethnic Chinese residents, and exacerbated the marginalization of ethnic Tibetans, who have also been displaced by mass resettlement campaigns within Tibet.”

The DIIR desk further responded, saying: "This is very much similar to how colonies are exploited by the colonial powers in the name of economic development. China’s so-called economic development are in pocketed areas of TAR which are heavily populated by the Chinese migrants and for self-serving purposes."

The global significance and ecological sensitivity of the Tibetan plateau, the “Third Pole” and “Asia’s water tap” is constantly emphasized by environmentalists, including the Chinese environmentalists. They blame human activities such as “deforestation, urban expansion, and infrastructures such as roads, dams, and power grids for profound changes in surface coverage in the region.”

A CTA response to China’s white paper on Tibet’s ecology in 2018 discusses the rampant open-air mining works and developmental projects that have caused much damage to Tibet’s fragile ecosystem. The report clearly underpins the lack of respect for the environment and the lack of sincere desire for environmental protection by the Chinese authorities. The confrontational attitudes of successive leaderships like Mao’s “man must conquer nature” have led to further damage of the local environment and destruction.

A 2018 report published by the UN Committee on the Elimination of Racial Discrimination expressed it concerns about the discrimination faced by Tibetans, including racially discriminatory practices in employment and recruitment processes. The Committee also made several recommendations to China such as “to revise its regulations and practices to ensure non-discriminatory determinations on passport applications and freedom of movement for Tibetans within and beyond TAR and abroad.”

Last September, the European Parliament’s Intergroup on Freedom of Religion or Belief and Religious Tolerance ranked China amongst the worst violators with the lowest respect for Freedom of Religion or Belief. The Intergroup raised specific concerns about the “severe restrictions faced by Tibetan Buddhists in the country including outside the Tibet Autonomous Region (TAR).”

One major drawback of China’s paper is the nonchalant dismissal of all the other Tibetan areas that are incorporated into Chinese provinces of Qinghai, Sichuan, Gansu, and Yunnan, constituting about two-thirds of the Tibetan population and Tibetan areas.

CTA spokesperson and Secretary of Information and International Relations, Mr. Sonam Norbu Dagpo remarked, “In the name of liberation, China has turned whole of Tibet into an area of Neo-Colonialism. China has always tried to justify its invasion of Tibet and its occupation with repressive policies against the Tibetan people. Like most of its Asian contemporaries, traditional Tibetan society or ‘Old Tibet’ as China calls it, was backward and in need of reforms but it is incorrect to call it ‘feudal’ as such was not the case.”