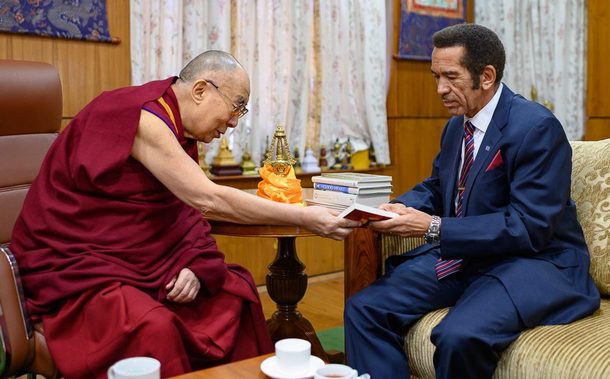 His Holiness presenting former President of Botswana Ian Khama with one of his books during their meeting at his residence in Dharamshala, HP, India on March 10, 2019. Photo by Tenzin Choejor

Dharamshala, India — The former President of the Republic of Botswana, Dr Serêtsê Khama Ian Khama met the Dalai Lama in Dharamshala, India, despite strong pressure from the Chinese totalitarian government. Khama ends his trip by attending the 60th anniversary of the failed Tibetan uprising against Chinese rule that forced the spiritual leader of Tibet to flee to India, March 10, 2019.

Botswana’s former president, Ian Khama posted the picture with the caption, "This morning I met with His Holiness the Dalai Lama for a thoughtful conversation. He shared some really profound messages, that we should think globally and not be narrow-minded and short-sighted because through intercultural dialogue we are able to build a shared future. We need not to discriminate each other based on skin colour, sex or religion; everyone should have equal rights without impositions or censorship."

"I had an enriching engagement with His Holiness and the Central Tibetan Administration this weekend. I shall never forget the suffering endured by Tibetans as they peacefully pursue their struggle to once more live in the freedom of their ancient homeland. let us all stand in support for a free generation of Tibetans," Khama wrote on Twitter after his meeting with His Holiness and top officials of the CTA.

"Coming as I do from a region that suffered colonial occupation, whose own indigenous cultural identity and struggle for political emancipation were likewise long suppressed, I cannot help but empathise with the continued travails and ongoing peaceful resistance of Tibetans as they seek to reclaim their sovereign dignity," said Serêtsê Khama Ian Khama, the President of the Republic of Botswana while addressing the 60th anniversary of the Tibetan national uprising day in Dharamshala, India, on March 10, 2019.

"The fact that the Tibetan struggle, as reflected in the teachings and diplomacy of His Holiness the Dalai Lama, as well as manifested in the political outreach of the Central Tibetan Administration, continues to be based on the “Middle Way” doctrine of non-violence," Dr Ian Khama said, adding: "dialogue ultimately aimed at reconciliation with the Chinese state is truly remarkable given the extreme repression Tibetans have endured, in both the Maoist and post-Mao eras."

"As we stand in support for a free generation of Tibetans we are cognizant of the fact that those who dare speak up inside Tibet about issues of religious freedom and environmental rights are being targeted for political prosecution. We note that the mere possession of the image of His Holiness the Dalai Lama remains punishable as a serious criminal offence," he said.

"We are painfully aware that the surviving repositories of Tibetan Buddhist culture are tightly monitored, while monks and nuns still face expulsion and prosecution if they fail to denounce their spiritual leader," the former President said, added: "while the authorities in Beijing may have the power to suppress basic freedoms within their own jurisdiction they should not be allowed to exercise the same repressive authority outside of their borders including illegal territorial claims in the South China Sea."

"It was for this reason that in 2017 when I was still President of Botswana, we refused to give in to Chinese government pressure when they threatened us if we failed to bar His Holiness the Dalai Lama from entering Botswana. Personally I had looked forward to what I am sure would have been an enriching engagement between His Holiness and some of the bright minds from my own country and continent on their perspectives about the convergence of the core Buddhists principles of unity, peace and compassion with our own humanist Setswana norms of Botho, which are based on tolerance, mutual respect and action through consultation.

"More broadly, I believe that as originally conceived the conference would have been a golden opportunity to expose the Dalai Lama to the time honoured wisdom of Africa, as well as Africans to the philosophy of the Dalai Lama. Perhaps this is why the very notion of His Holiness setting foot on the Mother Continent is so feared by his opponents.

"As much as I share in the global respect that has been earned by the Dalai Lama by his tireless outreach, I am also mindful that I am here today as the guest of a much greater community of exiles. Like India my own country of Botswana has often served as a place of refuge for those fighting the forces of oppression."