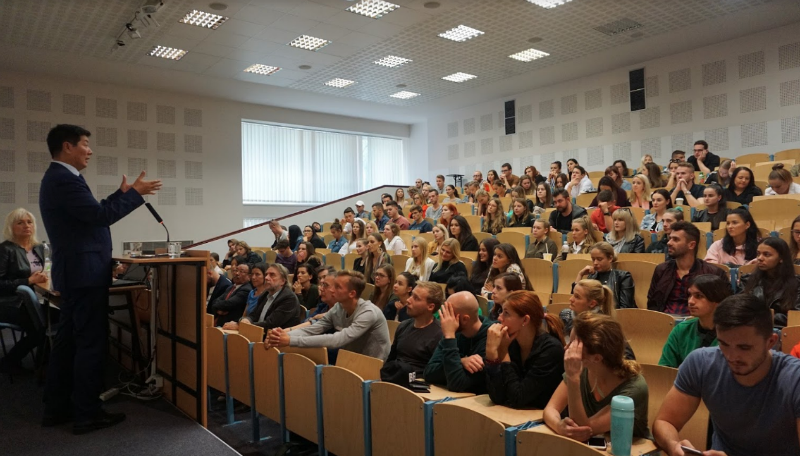 President Dr Sangay gave an insight to the topic of discussion by citing the Reporters without Borders report that has ranked Tibet as the least free place on earth, after Syria; as well as the Freedom House and other official reports that describe the situation inside Tibet.

President Sangay further stated how China’s propaganda machines such as the CCTV and Xinhua news are churning out stories on Tibet’s prosperity and developments. CCTV is now one of the most watched channels in Africa and its popularity is also growing in Latin American countries. He explained how he once read a four-page advertisement in an Indian newspaper filled with China’s propaganda on how China liberated Tibet from feudalism, civilised them and how the plateau is now prospering under Chinese leadership.

He stated, “So basically, China is spending a large amount of money in spreading this propaganda. Such is its power and influence that it has even reached the top level of offices in some countries. Therefore, we have the truth, but it is a major challenge for us.”

President Sangay further highlighted the grim situation inside Tibet and how 152 Tibetans have self-immolated to protest to the repressive regime. “The self-immolation protest,” he said, “has seen little coverage in the international media because China highly restricts journalists from entering Tibet, covering the situation and researching on them. Even in China itself, there have been cases of journalists being harassed.”

He touched on how China is engaging in “elite capture” in Europe and elsewhere. “China”, he continued, “bribes, buys and brainwashes these elites, who in turn provide services as needed by China in return.”

He further added, “the Tibet issue is now not only of the six million Tibetans but concerns the whole world.” President Sangay referred to the One belt One Road which is the biggest project of President Xi Jinping and its similarity to the road that China built in Tibet in the name of prosperity, a road Tibetans on being paid silver coins help built and which ultimately facilitated China’s occupation of Tibet.” President Sangay warned, “it can happen to you too.”

Dr Sangay also touched upon the recent incident of Marriot Hotel and Mercedes Benz facing the brunt of Chinese wrath and how Chinese influence is now everywhere. He questioned the students, “Do you want that? Do you want to be censored and threatened when you start your career as journalists?”

President Sangay then concluded by emphasizing Tibet’s importance to the globe and how supporting Tibetan culture is beneficial to all the nations and elaborated on how the Tibetan language is the reservoir of Buddha’s teachings. He also answered several questions raised by the students and thanked them for showing interest in the Tibetan struggle and issue.

After Bratislava, President Sangay’s next stop is to be Finland.