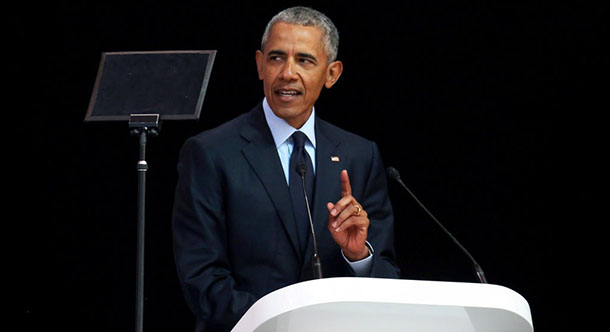 Johannesburg — Delivering his keynote speech during the 2018 Nelson Mandela Annual Lecture at the Wanderers cricket stadium in Johannesburg on July 17, 2018, former US President Barack Obama said that 'China, emboldened by its economic success, framed the promotion of universal values as nothing more than foreign meddling, imperialism under a new name.'

The former US President gave his first significant speech since he left the Oval Office, commemorating the 100th anniversary of Nelson Mandela’s birth. He touched on numerous topics ranging from the need to stand up for democracy and human rights and believe in facts to the current state of politics, saying many developing countries now are looking at China’s model of authoritarian control combined with mercantilist capitalism.

Speaking to a crowd of around 15,000 people during the 2018 Nelson Mandela Annual Lecture at the Wanderers cricket stadium in Johannesburg on July 17, 2018, Obama called the South African political leader “one of history’s true giants” and someone whose “progressive, democratic vision” helped shape international policies.

"China, emboldened by its economic success, started bristling against criticism of its human rights record; it framed the promotion of universal values as nothing more than foreign meddling, imperialism under a new name. Many developing countries now are looking at China’s model of authoritarian control combined with mercantilist capitalism as preferable to the messiness of democracy. Who needs free speech as long as the economy is going good?

The free press is under attack. Censorship and state control of media is on the rise. Social media – once seen as a mechanism to promote knowledge and understanding and solidarity – has proved to be just as effective promoting hatred and paranoia and propaganda and conspiracy theories. The entry of China into the world’s system of trade – all that greatly reduced the prospect of war between the world’s great powers. And from Europe to Africa, Latin America, Southeast Asia, dictatorships began to give way to democracies. The march was on. "

"A respect for human rights and the rule of law, enumerated in a declaration by the United Nations, became the guiding norm for the majority of nations, even in places where the reality fell far short of the ideal. Even when those human rights were violated, those who violated human rights were on the defensive.

And I believe we have no choice but to move forward; that those of us who believe in democracy and civil rights and a common humanity have a better story to tell. And I believe this not just based on sentiment, I believe it based on hard evidence."

That was the world just 100 years ago. There are people alive today who were alive in that world. It is hard, then, to overstate the remarkable transformations that have taken place since that time. A second World War, even more terrible than the first, along with a cascade of liberation movements from Africa to Asia, Latin America, the Middle East, would finally bring an end to colonial rule.

More and more peoples, having witnessed the horrors of totalitarianism, the repeated mass slaughters of the 20th century, began to embrace a new vision for humanity, a new idea, one based not only on the principle of national self-determination, but also on the principles of democracy and rule of law and civil rights and the inherent dignity of every single individual.

"It was in service of this long walk towards freedom and justice and equal opportunity that Nelson Mandela devoted his life. At the outset, his struggle was particular to this place, to his homeland – a fight to end apartheid, a fight to ensure lasting political and social and economic equality for its disenfranchised non-white citizens.

But through his sacrifice and unwavering leadership and, perhaps most of all, through his moral example, Mandela and the movement he led would come to signify something larger. He came to embody the universal aspirations of dispossessed people all around the world, their hopes for a better life, the possibility of a moral transformation in the conduct of human affairs."

And that’s what we need right now, we don’t just need one leader, we don’t just need one inspiration, what we badly need right now is that collective spirit. And, I know that those young people, those hope carriers are gathering around the world. Because history shows that whenever progress is threatened, and the things we care about most are in question, we should heed the words of Robert Kennedy – spoken here in South Africa, he said, “Our answer is the world’s hope: it is to rely on youth. It’s to rely on the spirit of the young.”

"Madiba reminds us that: “No one is born hating another person because of the color of his skin, or his background, or his religion. People must learn to hate, and if they can learn to hate, they can be taught to love, for love comes more naturally to the human heart.

Love comes more naturally to the human heart, let’s remember that truth. Let’s see it as our North Star, let’s be joyful in our struggle to make that truth manifest here on earth so that in 100 years from now, future generations will look back and say, “they kept the march going, that’s why we live under new banners of freedom.”