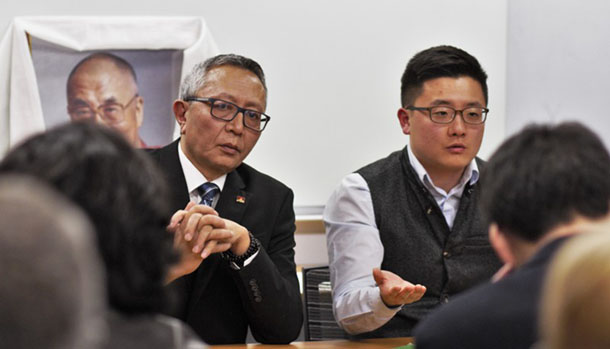 Students engaged in conversation and asked questions about the Tibetan issue in Douglass. Courtesy Diwas Gautam

Washington, DC — 'Tibetan issue currently involves the Chinese and Tibetan communities going in different directions and that it is vital to bridge the gap between the two,' the Chinese liaison officer in the Office of Tibet in Washington, DC, told students and faculty of University of Rochester, where students engaged in conversation and asked questions about the issue of Tibet.

Kunga Tashi, the Chinese liaison officer, Office of Tibet, Washington, DC discussed the "Middle Way" Approach and His Holiness' principal commitments with students and faculty of University of Rochester on March 31, 2018. Besides that, he also shared about his experience of how people with different opinions about contemporary issues can co-exist and resolve them through peaceful means.

The event occurred on the fourth floor of Douglass and was organized by Warner School student Se Hoon Kim, according to the Campus Times.

Kunga Tashi said that the Tibetan issue involves both the Chinese and Tibetan communities and that it is vital to bridge the gap between the two. He explained the key to bringing the two communities together are His Holiness the Dalai Lama’s three guiding commitments in life — promoting human values, achieving religious harmony, and preserving Tibetan cultural integrity.

He told the Chinese students that genuine autonomy for Tibetans must protect the rights and freedom of Tibetan people to preserve and promote their language, culture, religion, and thought.

As far as the solution of the Tibetan issue is concerned, he believes that the responsibility rests on the shoulders of the youth, as the future Republic of China belongs to the young Chinese and not the political leaders. It is in their power to mobilize the movement and take the “middle way.”

According to reports from the University, students in attendance were excited to put forth their questions and get answers from the representative of the Dalai Lama.

Responding to a question regarding the practicality of the peaceful approach, Kunga Tashi said, “Violence in the past is no indication of violence in the future and that dialogue and cooperation are the keys to a successful and peaceful resolution”.

“Since the Tibetan issue emphasises mainly on the idea of nonviolence and human-to-human dialogue, I thought it was the perfect example to use to promote the idea of dialogue to the school community. As scholars, we all have the responsibility to academically engage the world issue with the goal of promoting peace and non-violence,” Kim was quoted as saying.

Earlier in the morning of March 31, the Chinese Liaison Officer also met with a group of Indian students at University of Buffalo, according to a report published by the CTA official media.

The Chinese liaison officer also had a brief interaction with them on India-Tibet relations and its history of shared cultural heritage from thousands of years. He also brought to their notice, the yearlong Thank you India campaign being launched by the Central Tibetan Administration to honour India’s unparalleled support.