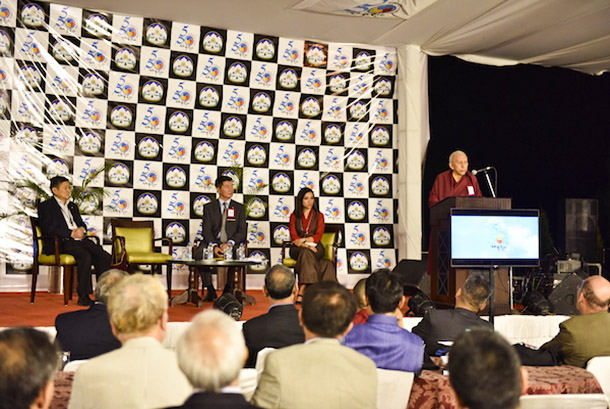 Dharamshala — 'The issue of Tibet is multifaceted and can be interpreted in many different ways. However, to understand the status of Tibet, one has to understand Tibet's culture, religion, wisdom and the political reality of Tibet and its people,' former Kalon Tripa Prof Samdhong Rinpoche told over 185 participants from 21 countries, attending at a forum on Tibet, titled "Five-Fifty Forum" held at Hotel Pavilion of Dharamshala, India Thursday.

Former Kalon Tripa Prof Samdhong Rinpoche addressed the participants of the five-fifty forum at a welcome dinner organised at Hotel Pavilion in Dharamshala, India, on October 5, 2017. "The forum is set to begin Friday, 6 October," according to the official media of the Central Tibetan Administration.

In his address, Prof Samdhong Rinpoche shared his views on the current status of Tibet and the prospects for change in the future. He said the issue of Tibet is multifaceted and can be interpreted in many different ways. However, he explained that to understand the status of Tibet, one has to understand Tibet's culture, religion, wisdom and the political reality of Tibet and its people.

Outlining the prospects of change for Tibet in the future, Prof Samdhong Rinpoche said that positive changes would not come about automatically but that we have to work for it. He further divided contemporary Tibetan politics into three different phases: Five-Fifty of the 20th century, Six-Sixty of the 21st century and Five-Fifty of the future.

"Five-Fifty of the 20th century (1904 – 1954) was the period during which Tibet made some of its biggest blunders. In the first five years of the era, Tibet was caught in the trade treaties of China and British India, and was attacked by a British trade delegation in 1904. In the fifty years since then, Tibet was forcibly occupied by Communist China and was colonised," he said.

"At the same time, this period also provided great opportunities for Tibet to attain recognition and standing in the world. It was in this period that India got its independence and was open to dealing with Tibet as an independent nation. However, the Tibetan leadership at that time was completely ignorant of the world and we lost the opportunity," he said, adding that if we only understood the world situation, we could have asserted our sovereignty.

"In fact, the Indian leadership reached out to Tibet at that time to discuss the continuation of the trade treaties that Tibet shared with British India. However, Tibet didn't respond, thereby compelling India to talk to China instead," he explained.

Speaking on the Six-Sixty (1957 – 2017) of the 21st century, Rinpoche said that this was a period of mixed emotions. Rinpoche explained that the first five years of this period was traumatic for Tibetans but the later part of the sixty years brought some relief in the form of cultural and religious revival.

"It was during this period that His Holiness was forced go into exile and thousands of Tibetans were rendered homeless. At the same time, it was this period that brought Tibet and His Holiness the Dalai Lama to the world's attention. This attention helped garner support for Tibet from world leaders and revive Tibetan culture in exile," he said.

Rinpoche particularly specified non-violence and democracy, the two key components of His Holiness the Dalai Lama's leadership that will keep the Tibet movement thriving and headed in the right direction for a long period of time.

Rinpoche further opined that Tibetan language is being annihilated with a dangerous policy set in place by the Chinese government. He called for renewed energy in the restoration of Tibetan language, particularly in exile where Tibetans have the freedom to study and preserve its linguistic heritage.

Expressing his best wishes to the participants of the forum, Rinpoche urged them to deliberate wholeheartedly in the next three days and said that the fruits of their deliberations will be enjoyed by the younger generation of the Tibetan people in the near future.

DIIR Secretary equivalent Dhardon Sharling was the master of the ceremony and thanked Rinpoche for his deep and philosophical reflections of the Five-Fifty vision. CTA President Dr Lobsang Sangay delivered the introductory remarks at the dinner reception. He said there is no other person better than Prof Samdhong Rinpoche to explain the Tibet issue given his profound wisdom and lifelong experience in the Tibetan administration.

Secretary Sonam Norbu Dagpo delivered the thank you remarks of the reception. He thanked Rinpoche for succinctly summarising the Tibet issue and its contemporary politics.

The Five-Fifty Forum: Shaping Tibet's Political Future organized by the Department of Information and International Relations (DIIR) of CTA will begin tomorrow and will conclude on 8 October 2017. Over 185 participants from 21 countries have converged in Dharamshala for the three-day forum.