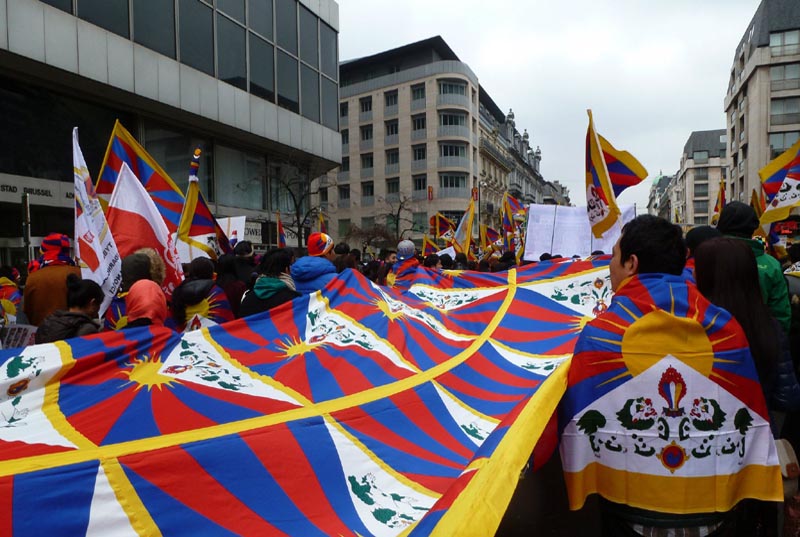 Berlin, Germany, March 10, 2017 — Today cities, municipalities and districts throughout Germany show their solidarity with Tibetans in Tibet. Hundreds of them are raising the Tibetan flag on their town halls and public buildings, thereby showing their support for human rights in Tibet.

"They are participating in the campaign "Fly your flag for Tibet" organized by Tibet Initiative Deutschland e.V. (TID) that is advocating for the right to self-determination for the Tibetan people," TID says in a statement, issued on the Tibetan national uprising day.

The organiser stated that "the campaign is currently facing a strong backlash. On one side, the Chinese embassy is trying to discourage mayors to raise the Tibetan flag on March 10th. On the other side, the Bavarian Ministry of the Interior has sent out a letter, asking mayors to "re-think" raising the Tibetan flag."

"The Bavarian ministry of the interior is citing legal clauses that put in to question if cities and municipalities are permitted to raise the Tibetan flag. Cities and municipalities, however, are supporting human rights and are advocating for Tibetans' right to self-determination. They are not interfering with foreign policy matters, as the interior ministry's reasoning might infer. This is a matter of municipal autonomy. It is very peculiar that the Bavarian interior ministry uses the term "snow lion flag" in its letter to the mayors, a term that is also used in the letters sent out by the Chinese embassy," says Mr. Wolfgang Grader, chairman of TID.

Since 1996, Tibet Initiative Deutschland e.V. has called on German cities, municipalities and counties to fly the Tibetan flag on their town halls and public buildings on March 10. On March 10th, Tibetans and Tibet supporters worldwide commemorate the Tibetan national uprising of 1959, which was violently crushed by the Chinese army, killing about 87.000 Tibetans.

In recent years, in total more than 1.000 cities and municipalities throughout Germany participated in the campaign. Today, TID is organizing demonstrations, vigils and events in more than 20 cities nationwide.

Tibet was invaded by Communist China, starting in 1949, Beijing calls a "peaceful liberation". Since that time, over 1.2 million out of 6 Tibetans have been killed, over 6000 monasteries have been destroyed— the acts of murder, rape and arbitrary imprisonment, torture and cruel, inhuman and degrading treatment were inflicted on the Tibetans inside Tibet. But, authorities in China still claim that "China 'peacefully liberated' Tibet, and that the Tibetans are living in a "Maoist socialist paradise."