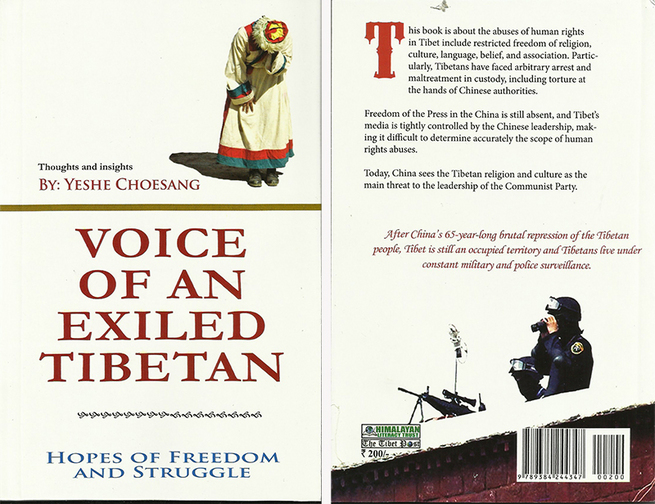 Dharamshala: - On 10 December Yeshe Choesang, editor-in-chief of the Tibet Post International (TPI), released his book "Voice of an Exiled Tibetan" at the 25th Anniversary Celebration of the Dalai Lama's receipt of the Nobel Peace Prize and the 66th International Human Rights Day.

The book is primarily a compilation of articles related to the modern issues facing all Tibetans—at home and in exile—and seeks to serve as a response to how Tibet is portrayed by China and other outlets.

"These articles came up as a result of different events that affect Tibet or the perception of Tibet in the world. These articles and issues are important because we can't let go of whatever China or some of the world's leaders say. If you don't respond accurately, people think Tibetans are then just accepting the situation," said Choesang.

The book addresses myriad issues from Tibet's natural resources and keeping Tibetan culture alive within younger generations to the effect of the world economy on human rights. One of the most important themes for Choesang is that of immortalizing those who have sacrificed for Tibet. "There are many Tibetans who have lost their lives under the Chinese gun. It is important to remind younger generations and the world of their sacrifice, of these events, and the history of Tibet," said Choesang.

Choesang believes that, to a certain extent, many countries who have the power to act have been forced recently to choose between economical and human rights issues.

Voice of An Exiled Tibetan"The economies of many countries who once prospered are suffering; China is economically strong, and unfortunately, many countries are choosing the economy over human rights and values," Choesang said. "Yet, so many people sacrifice for human rights and democracy, and that's why these things should remain important to them. Their reaction should not be this way because younger generations are watching them. It's not a good idea to lead that way."

As the editor of TPI, Choesang is hoping TPI to reach international media standards, to remain unbiased, transparent, and to hold members of the Tibetan community and Tibet support groups more accountable.

"One of the most important points of the book is that we may have different viewpoints, but we're also trying to be a very open and democratic society," Choesang said. Publishing articles like those in the TPI and in 'Voice of an Exiled Tibetan' is a key element to maintaining and promoting those democratic principles.

While Choesang's dream has been to create a world history book translated into Tibetan, he believes that spreading the voice of Tibetans must be his priority; thus, "Voice of an Exiled Tibetan" came to be–to continue shedding light on the daily struggles faced by Tibetans for the past half-century. Choesang's book will be available soon at most bookstores in Mcleodganj, and information will be posted on TPI's website on how to purchase a copy online.Purchase my book on
Google
Amazon