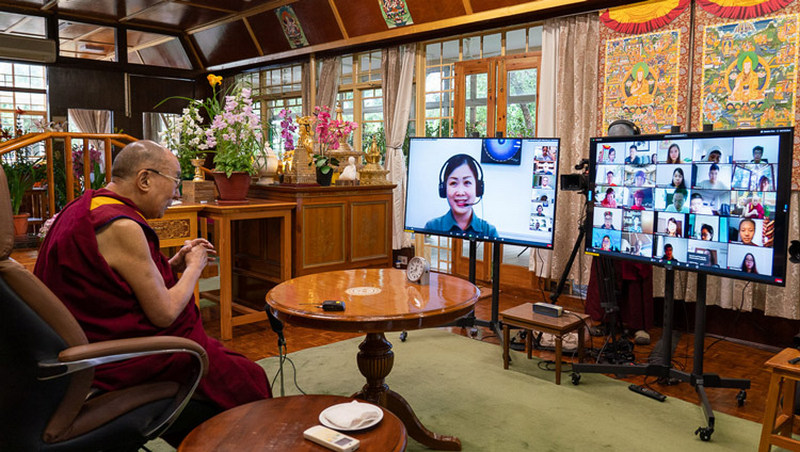 Weenee Ng of the Tibetan Buddhist Centre Singapore, welcoming His Holiness the Dalai Lama at the start of the dialogue with young people from South-east Asia at his residence in Dharamsala, HP, India on June 7, 2020. Photo: Ven Tenzin Jamphel

Dharamshala, India — "In today’s world, there is too much division. Thinking of others in terms of ‘us’ and ‘them’ is too prevalent—and it leads to conflict. We constantly need to remind ourselves of the oneness of humanity," His Holiness the Dalai Lama said, adding: "If we were to do that, there’d be no basis for hostility or bloodshed."

“First of all, I’d like to share with you the idea that as human beings, all seven billion of us are the same. From a Buddhist point of view, all sentient beings are the same in that all want to be happy and to avoid suffering," His Holiness began his dialogue with young people from South-east Asia.

"Human beings are intelligent, but when our intelligence is combined with destructive emotions, the results can be destructive. We develop science and technology, but dedicate them to war and destruction, creating ever more fearsome weapons. Other animals can’t do this," the Nobel Peace Laureate said.

“When our wonderful brains are under the control of destructive emotions, we create problems for ourselves. Therefore, since we also have the ability to reduce them, we have a responsibility to tackle these problems," he further added.

“Some scientists say that it’s basic human nature to be compassionate. We are social animals. We have a sense of community. Right from our birth, we are familiar with the idea of being concerned about others, and actively cultivating altruism gives us energy," His Holiness said.

“First among several of my commitments is to encourage other people to appreciate that it is part of our nature to be altruistic, to be concerned about others. In today’s world, there is too much division. Thinking of others in terms of ‘us’ and ‘them’ is too prevalent—and it leads to conflict. We constantly need to remind ourselves of the oneness of humanity. If we were to do that, there’d be no basis for hostility or bloodshed.

“Imagine being lost in some remote place and suddenly seeing someone coming towards you over the horizon. You wouldn’t care about their race, nationality, or religious faith, you’d simply be filled with the joy of encountering another human being. Fundamentally human beings are the same. We’re born in the same way and we die in the same way. We have to remember the oneness that unites us. Reminding others of this is my first commitment.

“Secondly, I’m committed to promoting inter-religious harmony. Our religious traditions have evolved over thousands of years. All of them convey a message of love and forgiveness. They hold different philosophical views. Some believe in a creator god; others stress our own responsibility for our condition. Scientists describe the earliest organisms emerging from the sea and a process of evolution eventually giving rise to the wonderful human brain.

“Because religions share a common message about the importance of love, harmony can develop between them. In India, we can see all the world’s major faith traditions living together side by side. The world’s second most populated nation is a living example that inter-religious harmony is possible.

“Thirdly, I’m a Tibetan, someone in whom the Tibetan people place their hope and trust. With regard to Tibet, one of my main concerns is the preservation of the Tibetan language. This is the language into which we translated more than 300 volumes of Buddhist literature from Sanskrit and Pali sources. We have studied and meditated on the knowledge they contain.

"This knowledge, which derives from the Nalanda Tradition that Shantarakshita introduced to Tibet in the eighth century, I regard as a precious part of our human heritage. The logic and philosophy it contains is not confined to religious tradition but can be beneficially studied from an objective academic point of view.

“I’m also concerned about Tibet’s natural environment. Several of the great rivers of Asia rise on the Tibetan plateau, providing crucial water supplies to India, Pakistan, Bangladesh, Vietnam, China, and so forth. At this time, when global warming is becoming increasingly serious, it’s very important that Tibet’s ecology is to be protected.”

Recalling that the knowledge kept alive in Tibet originated in ancient India, His Holiness described a further commitment to encourage interest in it in modern India. He emphasised that his concern is less with nirvana or positive future lives than with the ability of young Indians to train and sharpen their minds here and now. He also took the time to praise India’s ancient traditions of ahimsa and karuna. He stressed the crucial role non-violence can play in today’s world. His Holiness voiced his conviction that in India, ancient Indian knowledge of the workings of the mind and emotions can be combined with the benefits of material development.

“Young brothers and sisters, think about these four commitments of mine and if they seem useful to you, share them with other young people. In today’s world, too many people cherish only materialistic goals. They pursue sensory pleasure, but neglect to acquaint themselves with their underlying mental consciousness. By paying more attention to inner values, they’ll achieve greater peace of mind.”