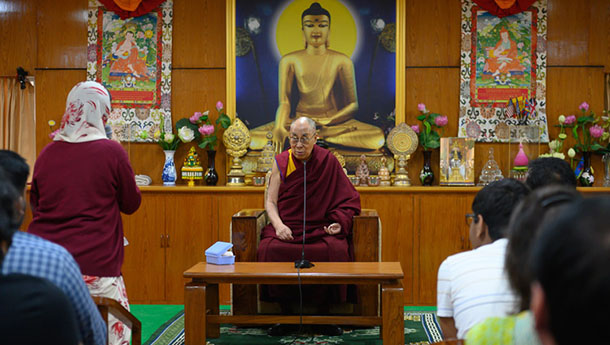 Dharamshala, India —  Pointed out that "weapons can only be used to kill and maim and the use of force to solve problems is mistaken", His Holiness the Dalai Lama said that "If we’re interested in peace we should seek a demilitarised world."

His Holiness the Dalai Lama'd comments came as he met with business leaders and professionals, 35 from India, 45 from Vietnam and 18 from Russia.

“The purpose of our life as individual human beings is to serve others as much as we can. I dedicate the actions of my body, speech and mind to the welfare of others every day," His Holiness said, adding: "That’s the meaning of Dharma and reflects the longstanding Indian traditions of ahimsa and karuna."

"I’ve studied in the ancient Indian tradition since childhood, which has meant memorizing classic texts, receiving word by word explanations of them and using logic and reason in debate to scrutinize what I learned. I strongly recommend using ancient Indian logic. As a student of the Nalanda tradition I’ve found it really helpful for maintaining peace of mind,” he added.

"Having invited questions from the audience, His Holiness told a businessman that although shrewd judgement might sometimes lead to success, simply being honest is more reliable because it attracts other people’s trust," the 83-year old Nobel Peace Laureate told the gathering.

He suggested that we need moral principles if we are to create a more peaceful society. Education should include instructions on how to achieve and maintain peace of mind. Integral to this is advice on tackling our destructive emotions. In India practices for accomplishing concentration and insight (shamatha and vipashyana) have yielded deep understanding of the workings of the mind and emotions.

“India is one of the world’s great civilizations, in which the conduct of ahimsa motivated by karuna play a crucial part. I am committed to trying to revive interest in ancient Indian understanding of the mind and emotions," the Buddhist leader said.

"I believe this is the only country that could successfully pioneer a combination of this ancient knowledge with modern education. In our monasteries in South India we have 10,000 monks and 1000 nuns trained and qualified to teach about this," he added.

In a Buddhist context it relates to our mind being fundamentally pure. Most of the time, he said, we are concerned with sensory consciousness without any idea of how to achieve peace of mind. Sensory consciousness is a relatively coarse state of mind. The dream state and deep sleep state, uncluttered by sensory input, are subtler, while the subtlest state of mind manifests at the time of death.

His Holiness also observed that grosser and subtler levels of consciousness can be distinguished in meditation. At its subtlest level the mind is not clouded by ignorance or subject to any other defilement.

Returning to the notion of ahimsa and karuna, non-violence and compassion, His Holiness pointed out that weapons can only be used to kill and maim. If we’re interested in peace we should seek a demilitarised world. The use of force to solve problems is mistaken. Seeing other people in terms of ‘them’ and ‘us’ easily leads to violence. As human beings we belong to one community, therefore we should respect each other as brothers and sisters.

In conclusion, His Holiness encouraged visitors from Vietnam, traditionally a Buddhist country, and those from Russia, where there have historically been Buddhists with links to Tibet and the Nalanda Tradition, to learn about the mind and emotions. He reiterated the need to take a scientific approach and to study.