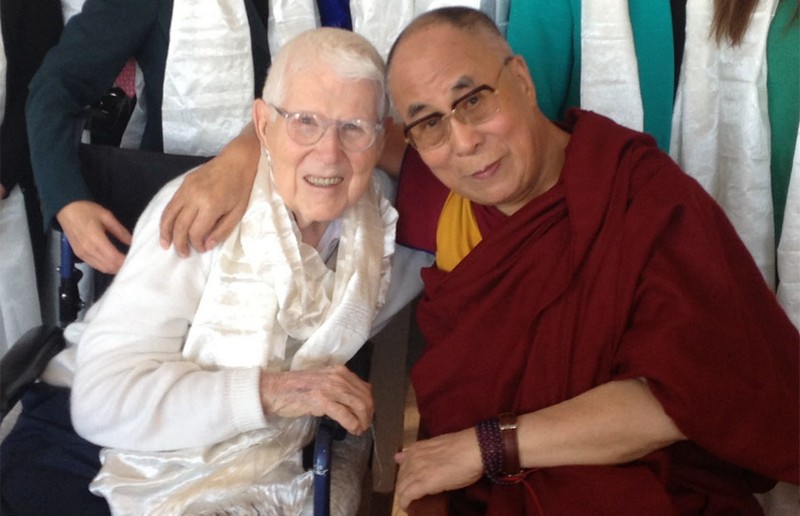 Dharamshala — His Holiness the 14th Dalai Lama of Tibet has expressed his condolences on the death of Dr Aaron Beck, the father of cognitive therapy whose work is considered revolutionary worldwide for the treatment of mental health - a major contribution to psychological science and psychotherapy.

Dr Beck, psychotherapist, father of cognitive therapy and pioneer in the development of cognitive-behavioral therapy, died at his home in Philadelphia on Monday, November 1, 2021. He was 100 at the time.

On receiving the news that his friend Dr Aaron Beck had passed away at the age of 100, His Holiness the Dalai Lama wrote to Dr Beck’s daughter Judith to express his condolences to her, her mother and other members of their family, according to His Holiness' official website.

“Your father truly lived a meaningful life,” he wrote. “As you know, over the years he and I had the opportunity to meet on several occasions, which included visiting him at home in Philadelphia."

"We enjoyed discussing matters of mutual interest, particularly with regard to the workings of the mind and how that understanding can be employed to help people to lead happy and satisfying lives," said the spiritual leader of Tibet.

While hailing his great contributions to mental health for the well-being of humanity, the 1989 Nobel Peace Prize Laureate said: "I deeply appreciated his extraordinary contribution to the field of mental health.”

His Holiness ended his letter, “I am confident that The Beck Institute, which your father founded in partnership with you, will continue to further his valuable work. This will surely be the best way to pay tribute to him and celebrate his life.”

“My father dedicated his life to the development and testing of treatments to improve the lives of countless people throughout the world facing health and mental health challenges," said Dr Judith Beck.

"He truly transformed the field of mental health with his development of and decades of research in cognitive behavior therapy. We now honour my father's legacy as we continue his work and further his mission of helping individuals live healthier, happier and more meaningful lives," she added.

Initially, Dr Beck began to question the foundations of typical Freudian psychoanalysis, which focused on uncovering the conflicts buried in people's pasts. However, rather than focusing on a person's unconscious, he sought to counteract his patients' negative thoughts while focusing on a patient's current problems to improve their daily outlook.

The technique gained popularity and spread from the 1990s. Today it is commonly used to manage anxiety and depression, but it can also be used for other mental health problems such as post-traumatic stress disorder.