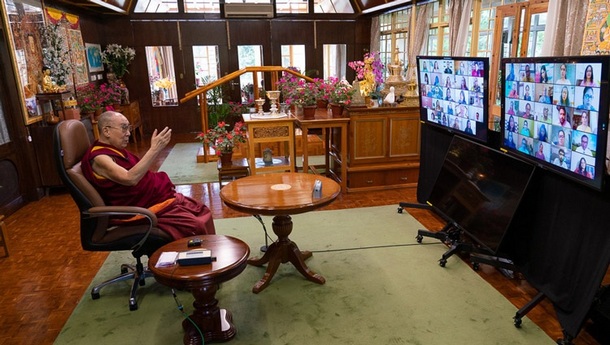 His Holiness speaking on Secular Ethics in Modern Education to members of Mind Mingle by video link from his residence in Dharamsala, HP, India on August 25, 2020. Photo by Ven Tenzin Jamphel

Dharamshala, India '— My main concern is to see a happy world but in order to be happy, we need ‘ahimsa’ and ‘karuna’, non-violence, and compassion. Compassion brings us inner peace, inner strength, and to be truly non-violent we need to be compassionate,' said His Holiness the Dalai Lama while speaking on Secular Ethics in Modern Education to members of Mind Mingle by video link from his residence in Dharamsala, India on August 25, 2020.

His Holiness the Dalai Lama Tuesday morning was invited to address members of Mind Mingle, an initiative to promote experiential learning and purposeful education with a view to achieving a child’s all-inclusive development. Naveen Sharma, Co-Founder & Director, welcomed His Holiness and told him that the opportunity to talk with him was a dream come true.

Sharma mentioned that Mind Mingle is also in touch with Social, Emotional, and Ethical (SEE) Learning, India, the K-12 education program developed at Emory University with His Holiness’s support and encouragement. He requested His Holiness to guide them with regard to the Need for Secular Ethics in Modern Education.

“My main concern is to see a happy world. Mere knowledge is no guarantor of happiness. There are brilliant, highly educated people in the world, who are bitterly unhappy. Modern education is oriented towards material goals, but in order to be happy, we need ‘ahimsa’ and ‘karuna’, non-violence, and compassion, which have been aspects of Indian tradition for thousands of years. Compassion brings us inner peace, inner strength, and less anxiety. Non-violence means that in our physical and verbal behavior we don’t harm others. And to be truly non-violent we need to be compassionate.

“For thousands of years, Indians have explored and trained the mind through calm abiding and analytical meditation. Modern education, which originated in the West, includes no understanding of how to tackle our emotions. Consequently, highly educated people have been involved in the design and manufacture of increasingly sophisticated weapons, including nuclear weapons. These inventions have required intelligence and technical ingenuity, but their production is completely devoid of moral scruples. The principles of compassion and non-harming are not involved.

“In such cases, instead of bringing about inner peace, the brilliant human mind has invoked the destructive emotions of anger, fear, and anxiety. Today, just as everyone observes physical hygiene, there is a corresponding need for emotional hygiene, and we can find instructions about that in ancient Indian tradition. That’s why I believe India is especially well-placed to combine modern, materialistic education with non-violence and compassion.

“Here in the 21st century, we should try to promote ancient Indian knowledge of non-violence and compassion and combine it with modern education,” the Nobel Peace Laureate said. He mentioned that he is bound by four commitments. As a human being, one of the seven billion alive today, he recognises that, whether we have a religious faith or not, we all need peace of mind. And that is the basis on which humanity can become happier, more peaceful, less fearful, which in turn is the basis for genuine world peace.

“Unless we learn to tackle our destructive emotions,” he added, “we’ll follow the pattern of the last century, marred as it was by fighting and killing. That was an era in which scientific knowledge contributed to immense violence. But now, at a time when more people are interested in peace, I’m committed to sharing with others the importance of being more compassionate.

“Scientists observe that social creatures like us depend on our community and have a natural concern for it. That’s why it is basic human nature to be compassionate. From early childhood, we are dependent on our mother’s kindness. But once children go to school, little attention is paid to warm-heartedness and inner values. Although infants play together with no concern for their companions’ class, race, or faith, once they go to school such secondary differences become a ground for seeing others in terms of ‘us’ and ‘them’.

“However, no matter what superficial differences between us there may be, whether we are of a different colour or a different faith, from East or West, North or South, we all still have to live together. Additional development is in the threats that confront us all. Because of global warming, the climate is heating up. Some scientists say that if things go on as they are, it will become so hot that our sources of water will dry up. We can no longer focus only on ‘my group’, ‘my people’ or ‘my nation’. We have to realize that each and every one of us is just another human being and that we have to live and work together.

“As a Buddhist, I recognise that all religious traditions, despite the different times and places in which they have arisen, convey a common message concerning the importance of loving-kindness − tolerance, forgiveness, self-discipline, and contentment. Different traditions have different approaches to cultivating love, some in relation to a creator God, some not. Even within the Buddhist traditions, we have different schools of thought.

“However, in India, we can see that all the world’s religions live together. Occasionally problems arise between them, but more often than not they are attributable to the actions of politicians. Here in India, I can see that it is possible for religious traditions to live together side by side, and I am committed to encouraging such an inter-religious harmony.”

His Holiness clarified that his third commitment is related to his being a Tibetan and someone who the Tibetan people trust. Since retiring from his political role in 2011, following the election of the political leadership, he has seen his responsibility as involving the preservation of Tibetan culture. He said he wanted to share with his Indian brothers and sisters that while the traditions of Nalanda University lie in ruins in India, they were kept alive in Tibet.

Historically Tibetans have regarded Indians as their gurus and themselves as ‘chelas’ or disciples. Today, in the land of their gurus, ancient Indian knowledge has fallen into neglect. His Holiness is committed to preserving this knowledge kept alive so long in Tibet. He observed that in the seventh century, King Songtsen Gampo chose to model the Tibetan written script on the Indian Devanagari alphabet rather than on Chinese characters.

Similarly, in the eighth century, King Trisong Detsen preferred to look to India as the source of Buddhist learning. As a result, he invited to Tibet Shantarakshita, who advised him to translate Buddhist literature from Pali and Sanskrit into Tibetan. The consequent collection of discourses and treatises fill 300 volumes and includes the works of Nagarjuna, Chandrakirti, Dharmakirti, and so forth. His Holiness affirmed that although he is now 85 years old, he continues to read these books when he has time.

He noted that the unique features of the Nalanda Tradition are its reliance on reason and logic and that it is the most comprehensive Buddhist tradition. Today, when scientists are intrigued by the theory of dependent arising, Tibetan Buddhist traditions, which derive from the Nalanda Tradition are worth preserving. Likewise, the Tibetan language, which remains the most accurate medium for explaining Buddhist thought, is also worth preserving.

“I asked Nehru to help us establish Tibetan schools,” His Holiness recalled, “and discussed with him whether they should teach Hindi or English in addition to Tibetan. He recommended English because it is an international language. Nehru was very kind to us. He chose Dharamshala as somewhere for me to live. He also wrote to the Chief Ministers of the various states of India asking if any had land on which Tibetans could settle. The most generous response came from Nijalingappa Chief Minister of Mysore State which is now Karnataka. Our great monastic centres of learning have been re-established there, where about 10,000 monks and nuns, as well as some Indians and some foreigners, study rigorously.

‘Then there is the question of Tibetan ecology. Tibet is a major source of water for much of Asia. I regard it as one of my responsibilities to make it clear that the Tibetan plateau should remain green, not deforested, or wantonly exploited for its mineral resources. “We are refugees, but we have found a good home. We lost our country, but we have reached the land of our gurus.

“My fourth commitment relates to the revival of ancient Indian knowledge in the land of its birth. As I’ve already said, I believe India is best placed to combine this ancient knowledge of the workings of the mind and emotions with modern education. I’m 85 years old, but if you look at my face, you’ll see I’m fit and strong and will be here for another 15 years yet. Thank you.”

In his answers to questions His Holiness made clear that when he talks about the prospects for reviving ancient Indian knowledge, he does so in an entirely secular context. Such a revival will not be achieved through prayer but through education. The purpose is not religious, but to enable individual human beings to find happiness. The important thing is to adopt a secular approach to putting compassion and non-violence into practice. The aim is a non-violent, compassionate society.

He told a questioner from Indonesia that although hers is a majority Muslim country, like many other parts of Asia, Muslims, Buddhists, Hindus, Christians, and so forth, can be found there. Adopting a secular approach means avoiding doing each other harm on the basis of sectarian prejudice, and actively doing each other good. What is important is to remain open-minded. He remarked that when he thinks of Indonesia, he remembers visiting the colossal stupa at Borobodur.

His Holiness observed that in a democracy faith is a matter of personal choice. “If you’re inclined to follow a theistic path like Christianity or Islam that’s a personal decision. And if you feel more comfortable in a non-theistic Buddhist or Jain context, that’s up to you too. Whatever religious path you follow, it ought to help you transform your emotions and help you cultivate warm-heartedness.

In relation to the Covid-19 pandemic, His Holiness expressed his appreciation of all those doctors and nurses who are caring for the sick, often at risk to themselves. While encouraging those who are conducting different kinds of research into remedies for the virus, he suggested that Ayurveda, Yunani, yoga, as well as the Tibetan and Chinese medical traditions, may have something to contribute too.

Naveen Sharma thanked His Holiness for talking with the group and expressed the hope that the educators had benefited from the interaction. His Holiness’s concluding advice was that there is always room to learn more. Masters of the Nalanda Tradition never stopped investigating, analysing and extending their knowledge. He asserted that although it’s good to be contented with material things, there needs to be no such limit with regard to deepening your understanding.