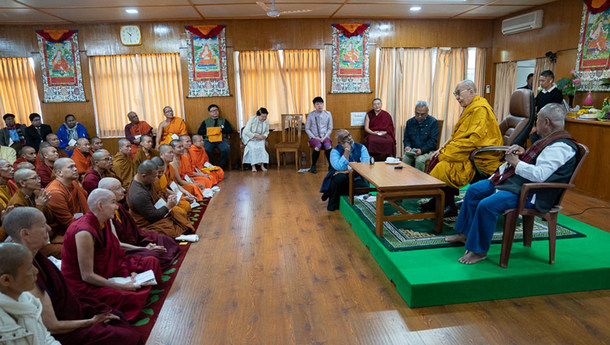 His Holiness the Dalai Lama speaking to members of the International Network of Engaged Buddhists at his residence in Dharamshala, HP, India on October 21, 2019. Photo: Tenzin Choejor

Dharamshala, India — "Different points of view appeal to people of different dispositions, but what is most important to remember is that all religious traditions stress the importance of cultivating loving-kindness," His Holiness the Dalai Lama told a large group of Buddhist devotees over 40 countries, in Dharamsala, India on Thursday.

“As human beings, we all want to live a happy life,” His Holiness told the crowd.

“But we are regularly faced with problems of our own making. Many such problems arise because we persist in viewing others in terms of ‘us’ and ‘them’. In addition to this, today we also see conflict taking place in the name of religion.

"There are differences between our religious traditions and even within them - for example, the Pali tradition included 18 schools of thought, while within the Sanskrit tradition there were four," the spiritual leader of Tibet said.

He added: "Different points of view appeal to people of different dispositions, but what is most important to remember is that all religious traditions stress the importance of cultivating loving-kindness.

“As you know, the Buddha encouraged his followers to question even what he had told them. Nalanda masters like Nagarjuna, Chandrakirti and Buddhapalita examined his teachings in this light, classifying them into those that were definitive and those requiring interpretation.”

He continued: “Our collection of scriptures includes 108 volumes of words spoken by the Buddha and 225 volumes of explanatory treatises by subsequent Buddhist masters. We have reassessed the content of these books in terms of science, philosophy, and religion.

“I believe this scientific and philosophical material can be considered in an objective, intellectual way.

"Consequently, we have compiled books dealing with science and philosophy as recorded in the Buddhist literature that has been published in Tibetan and are being translated into English, Chinese, Russian, Mongolian and so forth,” the Nobel Peace Laureate said.

His Holiness emphasised the need for the study.

He acknowledged that the Pali tradition conveys the Buddha’s fundamental teachings particularly the Vinaya tradition.

He recalled visiting Thailand many years ago and being deeply impressed by the Thai monks’ strict way of life.

He also reported a conversation he had at a meeting of the World Parliament of Religions in Melbourne, Australia, with two Burmese monks, who were surprised when he referred to the Vinaya as something they both, Tibetans and Burmese, had in common.

His Holiness said he is committed to reminding people of the oneness of humanity and the importance of nurturing human values, and his encouragement of interreligious harmony.

He mentioned that as a Tibetan he is committed to preserving the Tibetan language and its culture, as well as advocating for the protection of Tibet’s natural environment.

Finally, he described his commitment to reviving the appreciation for the ancient Indian teachings of the workings of the mind and emotions.

Answering questions from the audience, His Holiness suggested that a tendency for young people today to become depressed and despondent is rooted in the current education system.

He said modern education has little regard for how to tackle disturbing emotions and how to foster positive attitudes; therefore, giving insufficient methods for achieving peace of mind.

He encouraged his listeners to think about how to change this.

Members of the International Network of Engaged Buddhists led by Thai activist Sulak Sivaraksa met His Holiness the Dalai Lama at his residence in Dharamshala, HP, India on October 21, 2019.

Religious representatives from over 40 countries, including 35 from Thailand, 41 from India, 37 from Burma, as well as people from the US, Japan, South Korea, Bangladesh, Indonesia, Sri Lanka, Nepal, Taiwan, Hong Kong, Switzerland, Hungary, and Sweden.

His Holiness the 14th Dalai Lama is known throughout the world as a leading advocate for peace-making and non-belligerent.

His message is one of kindness and compassion to all sentient beings.

Over the last 60 years, he has traveled around the world spreading a message of peace and universal responsibility.

He also believes that the common aim of all religions is to foster tolerance, altruism, and love.

He retired from politics in 2011 but, as one of six million Tibetans, His Holiness said he will continue to serve Tibet’s cause.

In 1959, His Holiness the 14th Dalai Lama along with thousands of others escaped to India, where he was given political asylum.

The spiritual leader has set up a government and rebuilt monasteries where masters pass on their teachings to young monks.

Tibetans in exile have succeeded in gradually rebuilding their monasteries, preserving their culture and restructuring their society, in spite of the extremely difficult circumstances.

The Chinese Communist totalitarian regime (PRC) began their invasion of Tibet in 1949, reaching complete occupation of the country in 1959.

Since then, more than 1.2 million people, 20% of the nation's population, have died as a direct result of China's illegal invasion and ruthless occupation.