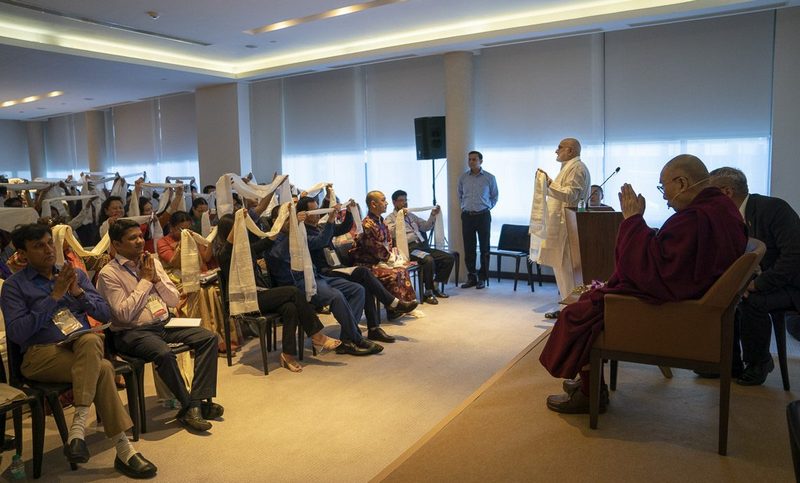 New Delhi, India — “We are social animals who biologically need karuna or compassion and as long as we have compassion, we’ll be physically and mentally fit," His Holiness the Dalai Lama said when speaking to a group of students and teachers from South Asian countries who have been taking part in workshops about universal values and secular ethics in New Delhi, India on April 4, 2019.

The Nobel Peace Prize Laureate was in India's capital city, New Delhi for the Global Launch of the Social, Emotional and Ethical Learning (SEEL) program developed at Emory University, Atlanta, Georgia, USA.  Organised by the Dalai Lama Foundation for Universal Responsibility, His Holiness the Dalai Lama spoke to a group of students and teachers from South Asian countries who have been taking part in workshops about universal values and secular ethics in New Delhi, India on April 4, 2019.

His Holiness met with Venkat Krishnan the founder of Daan Utsav - Festival of Giving - who requested him to give a message to all who will participate in the Joy of Giving Week 2-8 October this year. Krishnan told him, “We want people to realize that having compassion for others doesn’t make you sad, it makes you happy.”

His Holiness responded, saying: “We are social animals who biologically need karuna or compassion and as long as we have compassion, we’ll be physically and mentally fit. This is something scientists now recognize."

"Encouraging more people to experience this is the best way to create happy individuals, families, communities and in fact a happier humanity. The Joy of Giving Festival is important because during that time we are reminded of karuna; but actually we need to keep it up the whole year round,” he added.

Next the spiritual leader met with about 80 students and teachers from South Asian countries, who represent 300 students who have been taking part in workshops about universal values and secular ethics. Rajiv Mehrotra, Secretary of the Foundation for Universal Responsibility, which has organised the workshops, gave an introduction.

He said the aim had been to strengthen young people’s capacity to develop compassion, universal responsibility and a respect for diversity. Students from South Asia were encouraged to embrace positions that were acceptable to faith traditions and agnostics alike, engaging with issues across religious and ethnic divides. He pointed out that because of differences in individuals’ receptivity immersion programs were necessary to enhance transformative change.

Mehrotra described education in inner values as a lifelong process and suggested that schools and colleges can function as places of healing that can prevent the growth of hatred and fear. They can instead become places of true development.

“When I received the Nobel Peace Prize,” His Holiness responded, “I gave half the prize money to Baba Amte to support the excellent work he was doing to help lepers in his ashram. The other half I gave to the Foundation for Universal Responsibility and asked Rajiv to take action—with this program, among others, he has."

"Young children don’t care about differences of religion or nationality. But once they enter the education system they learn to emphasise such differences. Meanwhile, education today doesn’t have much to say about inner values," the Tibetan leader said.

“Nevertheless, this country has longstanding traditions of ahimsa and karuna, non-violence and compassion. And the practices of shamatha and vipashyana have given rise to an understanding of how to train the mind. Modern education does a wonderful job of providing for material development," he said, adding: "but neglects this other aspect of human knowledge."

“Much of the suffering in the world today is of our own creation. Everybody wants to be happy and no one wants to be miserable. Having a few people exercising power and exploiting the majority is a hangover from feudal times, and yet we live in a largely democratic world in which power belongs to the people," His Holiness said.

"In such a world it’s immoral to order others to go and fight. Differences between people need to be solved through dialogue because we live in a global community. We take part in a global economy and we all face the challenge of climate change," he suggested.

“Discarding weapons, we must adopt a non-violent approach following the Indian traditions of ahimsa and karuna. We need to learn from kindergarten onwards how to tackle destructive emotions and how to combine an understanding of the workings of the mind and emotions with modern education. If this can be achieved in India, others may follow.”

His Holiness told a young Afghan woman who wanted to know how religion can help us work for peace that the key lies in education; that is what will be most effective. A young man from Kathmandu, Nepal heard that acting with compassion counters loneliness and makes you happy. A Bangladeshi student learned that since negative emotions are based on ignorance, the remedy is to develop wisdom understanding reality. His Holiness advised a young Sri Lankan woman that sometimes following secular values is the most effective course.

When a young Kashmiri asked the spiritual meaning of freedom, His Holiness noted that the problems in Kashmir arose out of the partition of the country. He recalled historical links between Tibet and Kashmir. “Keep up your determination,” he advised, “but don’t get too bogged down in emotions. Be realistic. Look at problems you face from different angles. Try to distinguish appearance from reality.’

His Holiness advised a young woman from Manipur, North-east India, who wanted to know how cultivate peace within herself, to read Shantideva’s ‘Guide to the Bodhisattva’s Way of Life’. He told her to pay attention to the instruction to exchange selfish attitudes for concern for others because if you remain selfish, others will seem like adversaries, whereas it’s much better to see them as friends. The meeting concluded with a representative from Sikkim making an offering to His Holiness on behalf of the group.