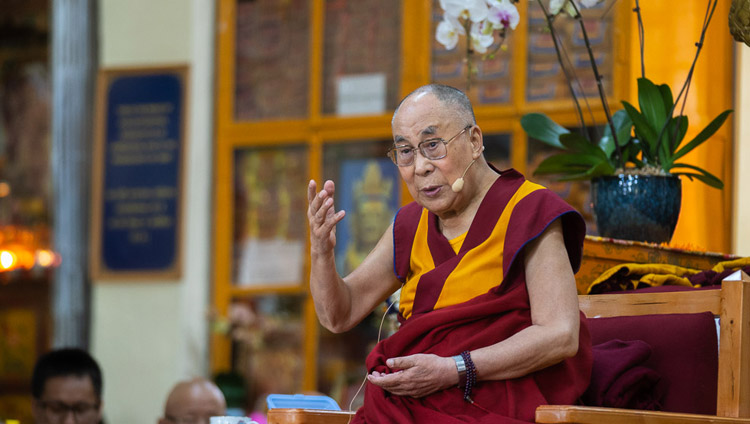 His Holiness the Dalai Lama answering question from the audience on the final day of his teachings for Buddhists from East and Southeast Asia at the Main Tibetan Temple in Dharamsala, HP, India on September 7, 2018. Photo by Tenzin Choejor

Dharamshala, India — Often describing himself as just a simple monk from Tibet, His Holiness the 14th Dalai Lama said he is encouraging to revive the ancient Indian knowledge in the country of its origin and its subsequent spread across the world including the countries following Buddhism, such as China.

The teachings were held at the request of a group from Asia including Indonesia, Korea, Malaysia, Singapore, Thailand and Vietnam at the Main Tibetan Temple in Dharamsala, HP, India on September 4-7, 2018.

Speaking to over a thousand devotees gathered in Dharamshala, India during the last day of his four day teaching on Buddhapalita's "Commentary on the Fundamental Wisdom of the Middle Way." His Holiness said, "Today the world faces a crisis related to lack of respect for spiritual principles and ethical values. Such virtues cannot be forced on society by legislation or by science, nor can fear inspire ethical conduct. Rather, people must have conviction in the worth of ethical principles so that they want to live ethically."

“I tell my Indian friends that in the past Indians were the gurus and Tibetans were the disciples or chelas. However, we have proved to be reliable and have kept alive the knowledge we received. Partly as a result of an education system imposed by the British, Indians have neglected this store of knowledge," His Holiness said.

"That’s why I am encouraging a revival of these traditions in the country today. The ideal result would be a combination of modern education with ancient Indian knowledge. Earlier this year I met with 150 Vice-Chancellors of Indian Universities who showed genuine interest in this idea," the spiritual leader added.

“If we succeed in restoring interest in ancient knowledge of the workings of the mind and emotions here in India, the next target could be China, a traditionally Buddhist country. When Xuanzang came to India, he studied at Nalanda," he told the gathering.

"Today, many Chinese feel close to Buddhism, in fact a Beijing university a few years ago estimated there were 300 million Buddhists in China, since when I’ve heard the number has grown. Efforts to eliminate corruption in China would be more productive if people were simply more honest and disciplined."

The Nobel Peace Laureate mentioned that "If the 2.5 billion people of India and China were influenced by a combination of modern education and ancient learning they would affect the whole world for the better. But this is to look into a future I won’t live to see."

"Nevertheless, I believe it’s important to try. Since the use of force is both out of date and ineffective we should aim for a demilitarized world. Weapons are designed to maim and kill, they don’t lead to constructive solutions," the Tibetan spiritual leader said, adding: "We have to learn to solve our conflicts and problems properly through talk and engaging in dialogue.”

“I have great respect for the Judeo-Christian traditions in which so much depends on God the creator to whom you direct your prayers, but here in India there developed several different traditions, including Buddhism, according to which what happens depends on what we do. Therefore, we have to take responsibility for tackling our own destructive emotions. We have to train and transform our own minds," he said.

“We all know people who tend to be angry, but even they are not angry all the time because anger is not actually part of our minds. If it were, there’d be little we could do. Anger is often closely related to attachment and both anger and attachment arise because of ignorance and distorted views. We can uproot them by using our human intelligence. From a wider perspective educationists agree that we have to start work now to bring up a new generation with a fresh point of view and secular, human values."